Kids are shown scientistesses at Fermilab

A few people have made an experiment with kids; see also Restructure, a Canadian PC blog, Boing Boing, and Geekosystem. They invited 14 girls and 17 boys - seventh graders - to the Fermilab and showed them some women who work there, together with a few men.

Some of the kids' ideas about the scientists have changed in the wake of this propaganda shtick. For example, this is how Amy imagined a scientist before and after the visit: 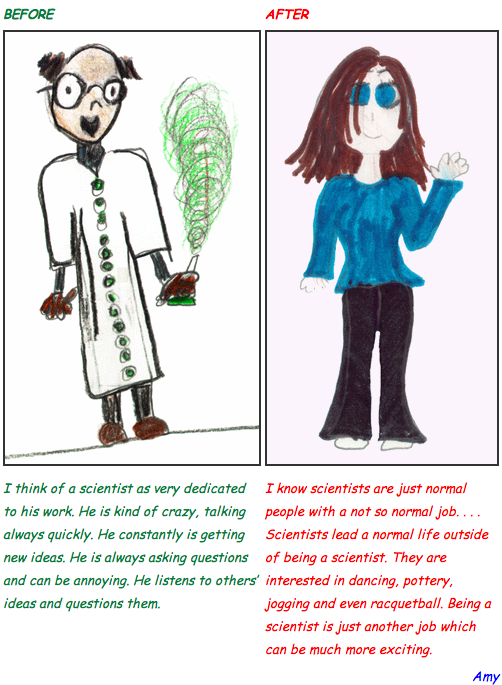 Amy, the difference may be because you have been primarily shown scientists who were not too dedicated to their work - such as the woman on your right picture. But be sure that there also exist scientists who are dedicated to their work. Your comments under the "before" picture captured the essence of the word "scientist" perfectly. On the other hand, your comments under the "after" picture - after you were brainwashed - described someone who should probably not be a part of science. You know, Amy, it's completely problem-free for a girl like you to become a scientist but the proper description of a good scientist is still under the "before" picture rather than the "after" picture.

Also, the organizers of the "experiments" repeatedly told the children that scientists were "normal people" and most kids parroted this strange statement in the "after" drawing. The lab coats mostly disappeared because they didn't see any lab coats at the Fermilab. (However, the most famous American woman at CERN did wear a lab coat; see LM audio.)


Did they manage to change all the kids' ideas about scientists as people? Well,
Note that the boys were not affected by the "experiment" while 3 girls were affected and they switched from a male scientist to a female scientist. The sample is arguably too small but you may produce a preliminary argument that in average, the boys are more stubborn than the girls.

It's kind of a funny result. Those people did the best thing they could to fabricate a completely misleading, predetermined conclusion that the dominant association of particle physics with males is just a social prejudice rather than a fact and a reflection of the laws of Nature. So they have brainwashed the kids as much as they could to show them that there is no gender asymmetry in science. Isn't it enough to sufficiently mislead the kids and get the result they need?

However, they forgot that the problem has many degrees of freedom and by increasing the amount of brainwashing, they could only change one parameter but not all of them. In particular, the "treatment" only worked for the girls. So the detailed result turned out to be another, very striking argument in favor of the statement that the girls and the boys think about science and the world very differently.

Of course, the politically correct ideologues don't like this - expected - result too much. ;-) Restructure suggestively asks:


If boys grow up to be men, and empirical evidence has no effect on males’ gender stereotypes about scientists, how do we challenge males’ association of science with maleness?

The only problem with this question is that it is not a question but rather a sequence of assertions and each of these assertions is untrue.

The experiment hasn't shown that the empirical evidence has no effect on the boys' "stereotypes". Quite on the contrary, it has shown that boys can't be too easily manipulated by rumors, low-sample anecdotal evidence, and naive superficial social theater plays that paint the world different than what it is; they prefer the actual empirical evidence that comes from many sources - usually not in the spoken form - and that can't be engineered. It's another part of the boys' maleness - and the boys' increased proximity to the scientific mode of thinking. The inclination of some girls to be affected by the social influences is a part of their femaleness, too.

Is Fermilab all about women? The most important question of the female FNAL society is where they eat.

You know, if the kids were shown people in funny green outfits, pretending to be extraterrestrial aliens, it also doesn't mean that only the girls who would say that "they have met nice ETs" have some respect for the empirical evidence. ;-)
Luboš Motl v 9:09 PM
Share