MINOS: hints of CPT-violation in the neutrino sector

A month ago, I wrote about the detection of neutrino oscillations in Europe. For the first time ever, OPERA in Gran Sasso, Italy found a tau neutrino that evolved from a muon neutrino emitted by CERN, a facility that is 731 km away.

America's Fermilab has a very similar pair of labs, too. NuMI in Batavia, Illinois is creating some neutrinos that are being detected 735 km away, in the Soudan Mine, Minnesota. That's where MINOS is located.

One week ago, the experimenters announced a very interesting yet highly preliminary result:

They have done what seems to be the most accurate measurement of the neutrino masses as of today. And they found that the mass differences, "Delta m^2", seem to be 40% smaller for neutrinos (blue ellipses) than for the antineutrinos (red ellipses). Also, the neutrinos' "theta" seems to be much closer to 45°. 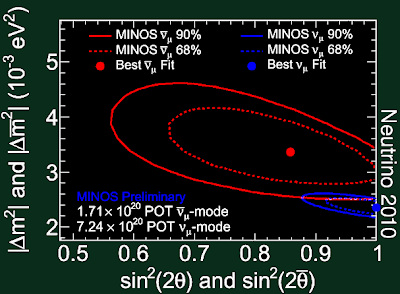 The accuracy is such that they can say that they're 95% confident that the parameters actually differ.

I do think that it is more likely that this signal will go away - i.e. that the right number is 0% instead of 95%. After all, the CPT-symmetry - whose validity should only depend on the Lorentz symmetry - should guarantee that the spectra of particles and their antiparticles should coincide (although the relevant objects should be reversed in the mirror, and the processes should be run backwards in time).

Unless I am making some mistake, even a new source of CP-violation in the neutrino sector would fail to be enough to account for the suggested differences of the parameters. However, if the neutrinos have Majorana masses (besides having right-handed components), there's no real difference between a neutrino and an antineutrino and the interpretation of their results may be incorrect because they shouldn't talk about the neutrinos and antineutrinos separately.

The CPT-violation seems pretty much unacceptable to me while very light right-handed neutrino components seem extremely unlikely. The existence of sterile neutrinos could also modify the analysis - but it is still much less likely than 50%. So I have a hard time believing that the signal could be real.

My guess is that most particle physicists share my bet that the signal is either a fluke or it is an incorrect interpretation of some neutrino-antineutrino oscillations. Just imagine how different the situation is e.g. from climate science. A 95% result would lead the researchers to declare a scientific consensus. The debate is over and the heretics have to be burned at stake. ;-)

However, we may be surprised. Four days ago, MiniBooNE has claimed a hint of a neutrino-antineutrino symmetry violation, too.

These possible observations have surely made the Neutrino 2010 conference in Athens, Greece more interesting.
Luboš Motl v 9:40 AM
Share