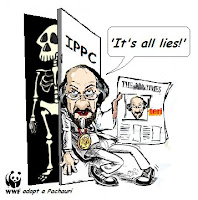 In an interview for the Financial Times, he has famously described the climate skeptics and he recommended us a talcum powder:

However, the InterAcademy Council's (IAC) review of the IPCC is underway. They must have told the atrocious man the self-evident fact that his job is no longer sustainable. All of us hope that such an inevitable cosmetic change won't be the only result of the IAC's investigation.

However, Mr Pachauri loves the power of the job and he will do everything to keep it. So he had to change his accent and today, he wrote something incredible for the BBC:

The very beginning of Pachauri's text is unprecedented:


I would like to start by saying that I am not deaf to those who do not agree with the scientific consensus on man-made climate change.

Instead, the IPCC thrives on intimidation, corruption, and brutal enforcement of pre-determined dogmas.

There exist vague hints that the ongoing IAC session in Montreal may not be a complete farce. The four witnesses are:


Robert Watson: an ex-chief of the IPCC
Christopher Field: its current WG boss for impacts
Hans von Storch: a boss in Germany
John Christy: a boss in Alabama

Of course, von Storch is a centrist character who has described the hockey stick graph as a methodological rubbish and who has criticized some of the IPCC wrongdoing. John Christy is a key person behind the UAH satellite measurements and may be classified as a climate skeptic.

So the composition of the witnesses may imply that the hearings won't be completely meaningless. But the witnesses don't actually guarantee that the IAC review itself will be meaningful.
Luboš Motl v 5:49 PM
Share