One year ago, we were intrigued by viXra.org, Phil Gibbs' competitor to arXiv.org with no censorship or other quality requirements, for that matter. Unfortunately, the server hasn't attracted too many researchers and many people dare to think that the quality doesn't quite compete with that of arXiv.org, if you allow me to be unusually polite for a while.

Is there a variation of arXiv.org that would, on the contrary increase the quality? Can someone increase the sound of the content and the fame of the names of the authors? The answer is Yes. It's called:


The names and the abstract rock, don't they? If you want many more great papers of the same caliber, just press "reload". Just to be sure, you should check your sanity by playing a game where you're offered real titles and fake titles. Can you tell which one is which in much more than 50% of the cases? ;-)

If you're as patient as your humble correspondent, you may even win a Nobel prize: 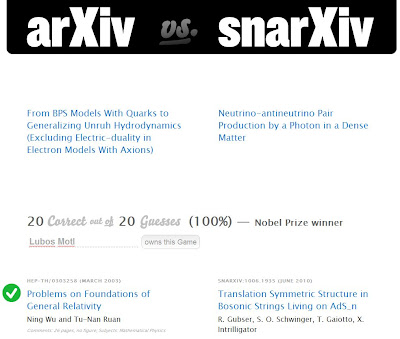 The papers seem incredibly realistic and I am impressed. The author of this fake system is David Simmons-Duffin whom I and others accepted to Harvard as a PhD student when I was in the admission committee for the last time. I remember his folder #481 pretty well. ;-) But of course, he was also previously an undergrad at Harvard and you do hear about students of his caliber.

Moreover, my mail archive shows that I was trying to sell two desks plus chairs to him for $25 - a great deal that he was at least initially interested in. I no longer remember who bought them at the end. ;-)