Future piece of evidence in favor of supersymmetry:


Because the LHC is hopefully going to study previously unseen realms of particle physics within months or a year, I plan to write a couple of articles explaining the basic points that make me believe that despite the negative opinions of the rest of the Internet, supersymmetry is likely to be seen at the LHC.

Let me begin with the gauge coupling unification.

Curiosity is one thing that makes us human. But let's admit that this chimp is more curious than most people. Via David Simmons-Duffin.

One of the most popular constants of Nature that armchair physicists (especially numerologists) want to explain is the fine structure constant,

When the squared electric charge is divided by some universal constants (in the SI units), it becomes a mysterious dimensionless ratio that all civilizations in this Universe would agree upon, regardless of their choice of units (because there aren't any units in the ratio).

That's the combination that keeps the Higgs vacuum condensate (which carries both Y and T_3, but no electric Q) unchanged. This invariance is needed for the vacuum to stay electrically neutral - and for the photons to remain massless (and for the corresponding electromagnetic to remain a long-range force).


It means that you should rewrite the electric charge "e" in terms of more fundamental couplings g and g' associated with the U(1) and SU(2) groups, respectively:

You shouldn't expect a simple formula for the fine-structure constant or for "e" because it is now expressed in terms of more fundamental couplings g,g' of the U(1) x SU(2) gauge theory in this way. If there are simple formulae, they're formulae for g,g', not "e".

However, as the second point suggests, the observed values of g,g' shouldn't be expected to be "simple", either. It's because they "run". If you calculate the quantum effects - the loop Feynman diagrams induced by the creation and annihilation of temporary "virtual particle pairs" in the vacuum - and the one-loop diagrams are the most important ones in a weakly coupled approximation -, you will find out that the "fine-structure constants" are not constants, as expected classically. Instead, they are linear functions of the logarithm of the energy scale.

In some sense, you may imagine that the refined "Coulomb's laws" should get an additional, "quantum" factor that slowly - kind of logarithmically - depends on the distance between the sources. All the details can be calculated in a straightforward way. You may link the extra logarithmic dependence on the energy to the properly cured logarithmic divergences of the one-loop diagrams.

Looking at the three running couplings

The Standard Model (SM) is based on a gauge group composed out of three pieces: U(1) and SU(2) from the electroweak force and SU(3) from the strong force (Quantum Chromodynamics describing the confining forces between the quarks and gluons). Their fine-structure constants run according to the following picture: 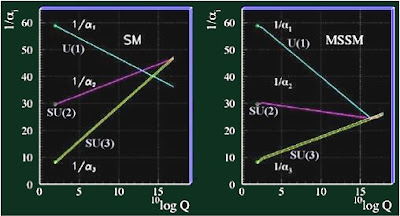 The y-axis is the fine structure constant itself, i.e. "1/g^2" for the three relevant constants "g"; the value of y would be 137 for the electromagnetic U(1) if it were included in the graph. However, we only include the fundamental coupling, including the hypercharge U(1) group. Its U(1) coupling is actually rescaled in the right factor, sqrt(3/5), that would incorporate the U(1) naturally into an SU(5) group.

The x-axis is the base-ten logarithm of the exchanged momentum expressed in GeV/c. The left side of the picture corresponds to energies comparable to 100 GeV - the state-of-the-art collider energies. The right parts of both graphs describe much higher energies that are directly relevant for the unifying theories of Nature - i.e. for physics at very short, more fundamental distance scales.

You see that there are two graphs above. The left graph describes the Standard Model - the model including all particles that have been clearly seen plus one God particle. The right graph is the Minimal Supersymmetric Standard Model (MSSM) - which has the same well-known particles, five God particles, and the superpartners of all the previous ones.

The colors of the U(1), SU(2), SU(3) couplings are cyan, purple, yellow: note that the colors are sorted alphabetically. ;-)

Location of the three lines in the Standard Model

You may see that the cyan, U(1) curve is decreasing in both graphs. Because it corresponds to the inverse coupling, the corresponding interaction is actually getting stronger at higher energies. The effect, previously linked to one-loop Feynman diagrams, is called "screening". You may imagine that at shorter distances (higher energies), the electrons are "sharper", i.e. more charged, and their charges are diluted by gluing virtual positrons on top of them, an effect that becomes more important at longer distances and that weakens the low-energy strength of the interaction.

At extremely high energies, well behind the right end of the graphs above, the hypercharge U(1) fine-structure constant would go to zero and the coupling would therefore diverge. This pathological point is called the Landau pole. Unless new physical phenomena modify the behavior of the coupling (and the associated particles), the theory would become inconsistent. To say the least, the perturbative expansion would break down above the Landau pole energy scale. But it's likely that this inconsistency is also a problem nonperturbatively.

On the other hand, the purple SU(2) and yellow SU(3) lines in the Standard Model graph are increasing. That means that the interactions are getting weaker with increasing energy; this effect is known as antiscreening and may be explained by a heuristic argument in which you create ever bigger magnets which strengthen the interaction at longer distances in this case.

Antiscreening is particularly important for the colorful SU(3) group because it leads to the asymptotic freedom - the main feature of Quantum Chromodynamics (QCD) that brought the well-deserved Nobel prize to Gross, Wilczek, and Politzer. Quarks at very short distances - inside the protons and neutrons - move almost like free particles, an effect that had been known from the experiments that saw the "deep inelastic scattering" a few years before QCD was born.

The Standard Model shows three straight lines and three random lines have no reason to intersect at one point. Instead, you see that just like you would expect, there are three pairwise intersections, corresponding to the fine-structure constants between 40 and 45 and energy scales between 10^{13} and 10^{17} GeV. They kind of want to meet but as you may expect from generic three lines, they won't meet.

Fixing the botched intersection by the MSSM

The right picture, one of the Minimal Supersymmetric Standard Model, looks nicer.

First, you may notice that all the lines become "more decreasing". Because they're the fine-structure constants (i.e. inverted squared couplings), the actual couplings are actually "more quickly increasing with energy" - because the "screening" effect is larger due to the larger number of charged particle species (the superpartners and new Higgses and higgsinos).

The antiscreening can never be amplified by new particles because it only comes from the gauge bosons themselves and their number can't change; there is always one gauge boson for one generator of the gauge group. While the SU(3) coupling still remains decreasing with energy (asymptotic freedom), although the slope is reduced by 50% or so (and there's not much space for new particles unless you want to sacrifice asymptotic freedom), the SU(2) coupling has actually switched the sign relatively to the Standard Model. The SU(2) interaction is now getting stronger with the increasing energy, much like the U(1) coupling.

More importantly, you see that the three lines intersect nicely, within the error that can be identified with the experimental and theoretical errors. Things seem to work. The probability of their intersection that is correspondingly accurate (and is a priori distributed in a dozen of orders of magnitude) is a few percent. And it works. This match is not an indisputable proof of SUSY but it is surely a powerful hint - one that is surely enough to "annihilate" one negative argument against SUSY based on a 1% fine-tuning.

You may try to play the devil's advocate and discuss the possibilities.

The couplings at low energies are what they are - the left beginning of the three lines in the graph. You may extrapolate them to the right. At least the U(1) coupling will be getting stronger - the U(1) fine-structure constant will decrease with energy.

The slope of all the lines may be modified by the addition of new particles - and you may speculate about completely new kinds of physical phenomena (which are not known these days). But it is kind of natural to use Occam's razor and assume the minimum spectrum that is compatible with everything you know. In the Standard Model, the couplings simply won't meet. That's strange because it would make the short-distance physics disordered. Why should the short-distance physics look even more messed up than the observed long-distance physics?

In the supersymmetric theory, the couplings do meet. Moreover, the very high-energy scale around 10^{16} GeV, where they meet at a fine-structure constant close to alpha=1/24 or so (a number that may ultimately be explained by string theory, e.g. F-theory), is a natural scale for many other reasons. First, it is just slightly below the Planck scale where string theory mostly likely adds gravity to the unifying picture of all forces: so at slightly sub-Planckian scales, string theory produces its first viable field-theoretical approximation, a supersymmetric Grand Unified Theory.

(The lines shouldn't be trusted on the right side from the intersection: new particles exist and the running of all the constants is modified.)

Also, the grand unified scale around 10^{16} GeV is natural for the neutrino masses. Unprotected right-handed neutrinos are likely to acquire masses comparable to 10^{16} GeV. By the seesaw mechanism, with the electroweak scale being the geometric average (the center of the seesaw), the theory produces another, very low-energy scale slightly below 1 eV which is indeed (the right order of magnitude for) the typical mass scale of the observed neutrino masses (known from the oscillation experiments: at least the mass differences seem to be that big).

Those things don't have to be right, after all. For example, there can be many more charged particles than those that are assumed in the SM or the MSSM. However, some collections of particles may naturally come in "full multiplets" of the grand unified group - such as SU(5), SO(10), or E_6. If that's so, the relative running of the three lines is not affected. If you add full GUT multiplets, the previous common intersection won't disappear (or won't appear) if it was there (or wasn't there) to start with. The intersection may just move to a different value of the fine-structure constant (i.e. down).

In the recent decades, many models (e.g. those with large or curved extra dimensions and/or with intersecting branes) have been studied where the unification of couplings - the intersection of the three lines - doesn't exist. It's good that they have been studied because they're completely new possibilities that had been previously overlooked or underestimated. And they may bring interesting, qualitatively new effects and explanations of the observed patterns of Nature. And to a limited extent, they have brought them to us.

However, when I look at all these models without any hype and outside the wind of the fashionable trends, I still think it is far more sensible and natural to believe that the gauge coupling unification at the grand unified energies is a genuine feature of Nature and it is real because the spectrum of charged particles up to these very high energies is related to the spectrum of the MSSM in a pretty simple way.
Luboš Motl v 2:07 PM
Share