Pilsen is one of those proper cities that have a well-defined center, namely the St Bartholomew Cathedral, a church with the highest tower in Central Europe (103 meters), which stands in the middle of the Square of the Republic (129 x 192 meters). 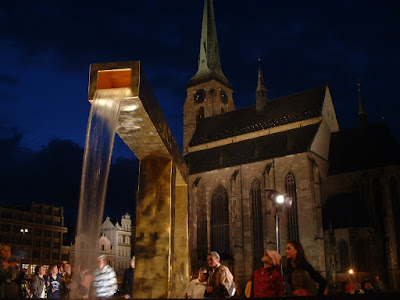 What is it? An answer will be found below. Click to zoom in.

There hasn't been a fountain on this rather large square since 1890. However, the city hall has organized a contest. It had its winner who has solved the task most accurately and the results are three new fountains in the corners that were activated two hours ago during an interesting happening.

Note that the square, much like most rectangles, has four vertices. One of them is occupied by a plague column. The remaining three vertices have just been enriched by three components of the Pilsner heraldry.

What are they? For example, what is the fountain at the top of this article? Well, it's clearly a camel! :-) And what about this one? 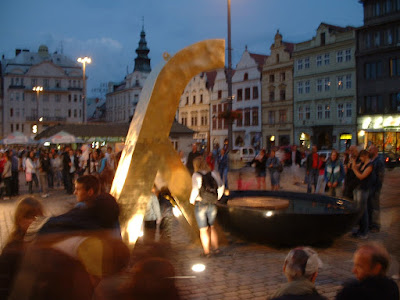 I took the picture before the water was turned on. Well, some of you may think that it's the Greek letter of lambda. Others could guess that it is a dog. The second group is closer to the truth but even the second group's answer is far too inaccurate. But it's actually a greyhound bitch. ;-) Isn't it clear? 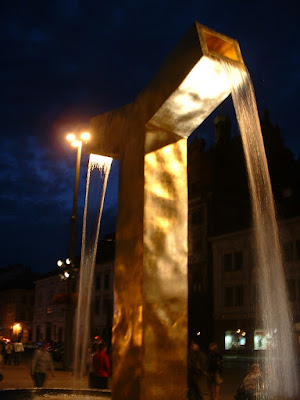 As you can see, we returned to the golden ages of Austria-Hungary except that the fountains are kind of modern, if not post-modern, in character. ;-) But I actually like them. They look like some inspiring pieces of metallic waste from the Škoda factories - something that could be directly put to the local Techmania science museum.


And this actually does reflect the identity of Pilsen. This functionalism that is sometimes over the edge is not just a modern piece of its identity: I would claim that already back in 1295, Pilsen was actually engineered to be this kind of a city with the industrially flavored cultural identity. The city was meant to be experimental in some sense. It's plausible that I would find similar structures unacceptable at the most historical places of Prague.

The total cost of the fountains is about CZK 27 million or EUR 1.1 million.

And as a local patriot, I do hope that the city will win the 2015 European Culture Capital contest.