As announced in Ben Kilminster's talk between 5:00 and 5:30 pm (see video on demand, go to 2/3 of the sliding bar, or PDF of presentation), the Fermilab has excluded the 158-175 GeV range for the Higgs mass, safely surrounding and choking Alain Connes' unlucky noncommutative geometry "prediction" of 170 GeV. The Tevatron has also independently begun to exclude the extra-light Higgs region, below 110 GeV or so.

Also, Kilminister has pretty much confirmed and demystified both rumors we recently publicized.

Five tantalizing candidate "b-bbar" events for a light 113-115 GeV Higgs boson were seen, in a bin with some high values of signal-over-background ("s/b" on the graph's x-axis, depicted on a log scale) where only 0.8 events would be expected from a Higgsless background!

This fact at least softly confirms the first Higgs rumor. If the signal is real, it has to be a non-Standard-Model (e.g. supersymmetric!) Higgs because of the absence of signals in other bins. See the most Higgs-like jet-jet 113 GeV event on page 67/79 here; it's not too sharply incompatible with the LEP bound. (You should never trust the exclusions at the end points - do you remember Feynman's popular book and the story on the V-A weak interactions?) See also What a light Higgs would mean for particle physics.

Five Higgses at the Tevatron. Click to zoom in. 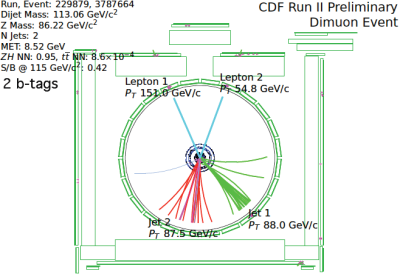 The MSSM Higgs with tan beta=30 or so (reasonably low and close to the top/bottom mass ratio!) became verifiable as well but the evidence remains inconclusive. The most significant and irresistible excess in the MSSM Higgs 3b search (about 2.5 sigma, or around 98% C.L.) remains at the Higgs H mass of 140 GeV: 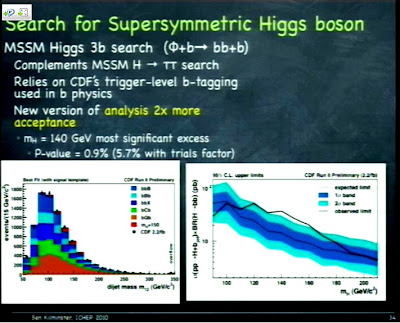 Based on 2/fb only: can grow and confirm the second rumor. Click to zoom in.

The Internet staff in Paris was not up to their job because the live broadcast was largely unusable - overloaded connections were the excuse. That's why I only reported a part of the MSSM results several hours after the talk.

So as I have just said, there also exists a mostly CDF weak evidence supporting a heavier neutral CP-even Higgs boson near 140 GeV. Your humble correspondent personally thinks that the existence of both Higgses, below 115 GeV and near 140 GeV, is actually the most likely outcome. See Why God particles have five faces in supersymmetric worlds (like ours?).

A live video stream was embedded here for a while.

If you have missed the news, on Friday July 16th, a Fermilab talk by Tom Wright (CDF) and Marco Verzocchi (D0) has rejected both recent rumors about the Higgs boson:

Both talks showed what the D0 and CDF collaborations have to offer to the participants of the ICHEP 2010 conference in Paris. These talks were nice and professionally organized. Tom Wright (CDF) has also enjoyed the advantages of a perfectionist native speaker.

Fermilab's Wilson Hall rebuilt to remind us of the Higgs boson: so far in the Photoshop only.

At any rate, both talks at the "Wine and Cheese" seminar provided us with explicit graphs showing that neither D0 nor CDF have found signals that would support either the "light Higgs found" or "Higgs plus bottom produced" rumors, assuming that these two rumors actually referred to two different findings. So I had to update both postings:

Although I estimated the probability of each rumor to be 50% per piece, they still became the first rumors promoted by TRF that turned out to be incorrect (recall that e.g. my rumors about the CDMS's announcement of two dark-matter-like events turned out to be exact). Next time, your humble correspondent will be more conservative, especially when it comes to propagators of gossip whose main passion are Silvio Berlusconi's intimate organs.

So is the Tevatron's fame over? Can the U.S. collider be written off? Has it been settled that it can no longer offer us anything that could be considered new and interesting by those of us who don't have to pretend a fake excitement? Well, we must be careful about this counter-conclusion as well. On Monday, July 26th, D0 and CDF will present their combined data at ICHEP 2010:

The talk will be given by Ben Kilminster at 5:00-5:30 pm Paris Summer Time at the plenary session. It will follow a brief introduction by French president Nicolas Sarkozy at noon.

As our reader nicknamed gossip lover from the Fermilab (IP) pointed out later, a special "Wine and Cheese" seminar by Wade Fisher about the combined data was declared to take place at the Fermilab on Monday, 4 pm their local time (which is 6:20 hours after the Paris talk).

We will see whether something interesting may be hiding in the combined data. I have some doubts about it: the would-be signals from D0 and CDF don't seem to be excessively consistent with one another. It should be possible for you to go through all the D0 graphs and find the corresponding CDF graphs - and check whether their 2-sigma anomalies are correlated anywhere.

The Tevatron folks will give about 40+ talks at ICHEP but because they have announced that they will show no new data concerning the muon-antimuon asymmetry, the attractiveness of the Tevatron goods will depend on the existence of some juicy combined D0+CDF results, probably some data related to the Higgs.

A reader from the Fermilab has pointed out that Tom Wright (CDF) hasn't mentioned their upper bounds on tan(beta), using associated production of the Higgs with bottom quarks. That omission either means that they have made no improvements at all or that they have something to hide. ;-)

The previous CDF graph with upper bounds on tan(beta) was based on 2.5 inverse femtobarns and looked like this: 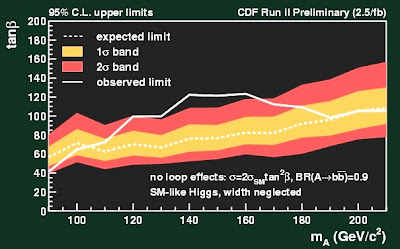 The x-axis is the mass of the neutral CP-odd Higgs boson in MSSM, which is called A. You see a colorful strip with a dotted line in the middle: it shows you the expected upper bound on tan(beta) that you would expect from 2.5/fb of data assuming no new physics such as MSSM; the colorful strips around the dotted line are 1-sigma and 2-sigma intervals.

The cross section of these bottom-Higgs processes goes like tan^2(beta), so if you don't see too many of them, you can be sure that tan(beta) can't be too high. For theoretical reasons (absence of a Landau pole), it's expected that tan(beta) is not much greater than 60 or so.

However, the upper bound on tan(beta) obtained from the actual observations is depicted as the thick white line. You see that if the mass of the CP-odd Higgs boson, A, is between 120 GeV and 170 GeV, they could only say that tan(beta) has to be below 100 or so, more than 2 standard deviations above the "expected" upper bound. It means that they saw an excess of events that are compatible with the A-mass in the range and that admit reasonably small tan(beta), maybe even below 60, which could be tasteful for the theorists.

This excess of events - failure to impose a stringent upper bound - was also confirmed in the Friday D0 talk. This analysis is based on 4.3/fb of data: 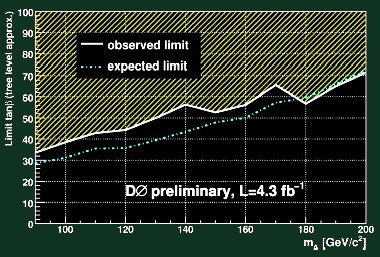 The 1-sigma and 2-sigma bands were inconveniently omitted but they may be thinner than the CDF bands because of the bigger luminosity that was used. Especially around the m(A)=140 GeV point, there could be a more-than-two-sigma signal in the D0 graph a paragraph above. So there's also a potential for 3-sigma signals from the combined D0+CDF data here, especially if CDF increased their dataset from the modest 2.5/fb.

If you're excited about a possible new scalar particle (A?) with mass 140 GeV and you want to be even more excited, look at this Standard-Model analysis of H (could be actually A?) decaying to WW. 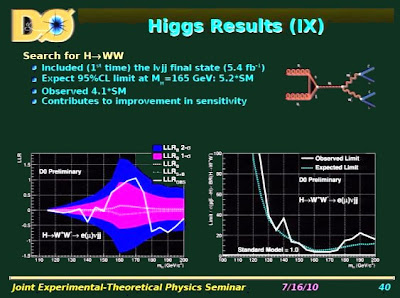 Do you see the stunning peak at 140 GeV in the right graph?

Strictly speaking, the discrepancies in the graphs above show the "absence of negative evidence". One must calculate the odds differently to see whether the data actually provide us with "positive evidence" of MSSM and a reasonable tan(beta). Maybe, with a bigger integrated luminosity than the previous 2.5/fb, CDF or CDF+D0 could have obtained the 3-sigma hints I promoted (three bottom-Higgs events) that tan(beta) is actually reasonable and the relevant MSSM interactions exist.

In principle, any 3-sigma deviation from the expectations of any quantity suggests that "something may be wrong with the SM" at the 99.7% confidence level (except that there are more than 300 channels + places in the graphs where such "anomalies" may occur so some of these 3-sigma warning signs are likely to occur by chance). However, it may happen that if you actually try to reconstruct the new physics from the excess signals, you will produce a much sharper picture, e.g. with sharper figures for the masses of the new particles.

Another relevant graph for my rumor #2 is one more graph from the D0 Friday talk: 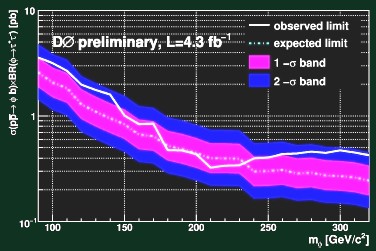 It shows something about the cross section of Higgs-bottom production, as seen from the tau-tau decays of the Higgs only (that's why there's a BR, branching ratio, as a factor on the y-axis). Again, D0 tried to determine an upper bound of the cross section multiplied by the branching ratio: assuming no new physics, it expected the bound given by the dotted line in the middle with the two colorful 1-sigma, 2-sigma bands around it.

Instead, it observed and received the upper bound given by the thick white line. It often deviates by more than 1 sigma. In particular, if the spinless superpartner masses (on the x-axis) reaches 300 GeV or so, you see a 2-sigma deviation from the expectation, too. Again, the observed thick line is bigger, so it is an excess of events.


Bonus: no FCNCs in top production

Nanotech and DOE Pulse promote a June 2010 preprint by the D0 Collaboration that has searched for signs of flavor changing in top-quark-producing processes. No such effects that would indicate new physics such as SUSY were found and the limits have been strengthened.

Meanwhile, ATLAS at the LHC has collected 13+ billion collisions which is over 0.3 or 0.4 inverse picobarns (an inverse picobarn is 1/1,000 of inverse femtobarn). The maximum luminosity has been 1.6 x 10^{30}/cm^2/sec. Add the same numbers for the CMS to get the LHC total luminous achievements so far.