Edward Witten and an inconvenient truth 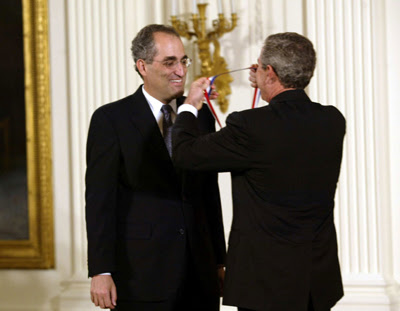 Witten getting the Craaford Prize. IOP and the Dutch Academy can't offer any famous W. to give their medals to E.W.

Congratulations to these two institutions that they managed to associate themselves with Edward Witten. :-)

So Witten has delivered an IOP lecture in the U.K. Jim Al-Khalili, a twitter and Iraqi-born English broadcaster and theoretical physics professor (Wiki), usually watches Ghana as it plays soccer.


But he has also attended a talk by Witten. And Jim had to summarize his important message about the fundamental physics into a 140-character tweet - actually three of them - which is no big deal for such an independent thinker. So his 2,290 followers were told:


Ed Witten lecture on string theory this afternoon [was] fascinating, but I remain far from convinced. Witten claims that if [the] LHC confirms supersymmetry, this is strong endorsement of string theory, but if [it is] not found then it just means SUSY [is] inaccessible at [the] LHC and string theory is just harder to prove. Too convenient I'm afraid Edward.

Now, I want to make a few simple points. Indeed, Witten's statement may be "convenient" for the champions of SUSY such as himself because SUSY will be studied even if the LHC is incapable to find it.

It is true that people may have vested interest to sell statements that are convenient for them as the truth and one must be careful about this obvious bias. However, it's still true that 1/2 of the convenient statements are true and people must still be allowed to say (and believe) such true yet convenient propositions.

Moreover, the notion of convenience is somewhat subjective.

Saying the opposite thing about the fate of SUSY after its hypothetical non-observation by the LHC may be inconvenient for Witten but it would be convenient for the physicists who have never contributed anything to SUSY (and who have never properly learned it) but who still painted themselves as being close to the cutting edge of theoretical physics.

Different things are convenient for different people so the impartial people couldn't find the truth even if inconvenience were the same thing as the truth. But the convenience is never a reliable criterion for the truth.

To decide whether Witten's statement is true, one has to look at the detailed evidence. And indeed, while the LHC is a pretty large machine that will move the energy frontier higher - nearly by one order of magnitude - it's still a finite gadget and it can't be guaranteed to answer all unanswered questions in physics. It's just one machine, not an oracle.

Supersymmetry is a concept of the top-down physics so to falsify it completely and experimentally, you have to go close to the Planck scale.

So of course that the sensible people who actually know the structure of physical theories as understood in the early 21st century will continue to work on SUSY even if the LHC happens not to find it. Even if the hypothetical LHC failure to see SUSY would be disappointing, the arguments to study it would still be strong. And of course that the people who will study SUSY independently will have to overcome some opposition from the society that understandably fails to understand the deeper arguments in favor of SUSY.
Luboš Motl v 7:13 AM
Share