Google and 5D gravity may beat China and Penrose 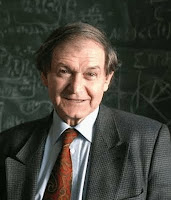 Well, the playfulness of this title is probably over the edge. What I mean is that five-dimensional general relativity may refuse to accept Roger Penrose's cosmic censorship rules.

David Berenstein has noticed a preprint that I kind of missed in the morning:

In its attempts to censor the Internet, China is following the 1969 recipe by Roger Penrose. ;-) His Cosmic Censorship Conjecture (CCC) is somewhat vague but it says that general relativity will never evolve a generic initial state to a final state with naked singularities i.e. those singularities that are not hidden under a causally inaccessible event horizon.

The motivation of CCC

This wishful thinking is "nice" because in its strongest form, it would keep general relativity as a truncation of the full theory of everything predictive. The problem with singularities is that anything can come out of them - all quantities are "infinity minus infinity", so to say. So if they appear in your vicinity, you have no idea what will happen and Einstein's equations won't help you.


However, only naked singularities represent this sort of a problem because the singularities that are hidden inside black holes are not allowed to influence the world around them, because of causal reasons.

In the definition above, I have also used the word generic. It's because the stronger assertion without the word generic may be ruled out, even in 3+1 dimensions. If you fine-tune your initial state a little bit, you can create naked singularities. Some kinds of gravitational collapses of exactly spherical matter distributions may be viewed as examples.

Of course, the initial singularity of the Big Bang can't be banned by Penrose. The initial state used at the Big Bang brings the well-known limitations for the predictivity in our Universe. God is great.

The new preprint offers rather convincing, numerical evidence supporting an old lore that 4+1-dimensional general relativity may reject cosmic censorship - i.e. that it may be able to produce naked singularities out of generic initial conditions. The toy situation that can achieve it contains "black strings".

Now, I have to explain what we mean by "black strings". Ordinary black holes in 3+1 dimensions are localized objects. If you look at them from a distance that is much bigger than these black holes, they look like points or particles. They have 0 extended spatial dimensions which is why they can be called 0-branes.

See Types and meanings of the branes for an extended discussion of these basic points and jargon.

In 3+1 dimensions, there are 3 transverse spatial dimensions to a point, so the space surrounding a point is S^2 - a two-sphere - which also becomes the spatial part of the shape of the event horizon (and you should add the infinitely shrunk time). A black string in 3+1 dimensions would have a horizon whose spatial topology would be S^1 times R. A black ring would be a bent black string compactified onto a circle in space. Its event horizon would have the topology of an S^1 x S^1, or a two-torus or a doughnut.

However, one can show that there are no static solutions of 3+1-dimensional general relativity that would have this topology.

On the other hand, in higher dimensions, general relativity has much more freedom. Many more shapes and topologies exist and some of them may be consistent with the equations. Already in 4+1 dimensions, you can find black holes (with various charges and angular momenta) as well as black strings. The event horizons are S^3 for 4+1-dimensional black holes but S^2 x R for black strings. There are many more possibilities, including black Saturns, but I don't want to get distracted from the main point here.

The instability of the black strings

It's been know for quite some time that these strings may be static solutions of GR in 4+1 dimensions but they're unstable. One can find "negative eigenmodes" or excitations upon them. The corresponding Gregory-Laflamme instability has been known since 1993.

The word "negative" means that these "wave functions" representing small perturbations away from the static solution have a uniform spatial dependence but the time dependence is not oscillating, as it is for "positive modes", and it is not constant as it is for "zero modes" (or "moduli", i.e. parameters labeling a family of static solutions). Instead, the time dependence is exponentially decreasing or growing. If there's a growing component, it always wins over the decreasing ones after some time.

So the black strings have negative modes. It follows that if you perturb them by a deformation of their geometry that mimics the negative mode's shape, the perturbation will exponentially grow with time. How will the spacetime look like when these perturbations get big enough?

Well, the black string may either remain a wiggly black string or it can decay to a chain of black holes. After long controversies, it's been found that between 4+1 and 12+1 dimensions, the string decays to a chain of black holes. Above 13 dimensions, it becomes a wiggly string. Such high "critical dimensions" where the qualitative behavior changes can be found even in classical general relativity. Despite the similar numbers, no rational relationship to the critical dimension of M-theory or string theory is known.

However, the precise physics of the decay to a chain of strings is still puzzling - especially because 5 is a kind of a marginal dimension. Lehner and Pretorius, the authors of the new preprint, argue that there's an interesting self-similar process going on over here.

At any rate, after a finite asymptotic time, the black holes in these chains reach a vanishing radius and the classical spacetime ends with a singularity, if these authors are correct. Because no fine-tuning is needed, it would be a counterexample to Penrose's conjecture.

It is no logical paradox

Well, there's no "inevitable" reason why the cosmic censorship conjecture should be true. What it is really based upon is a wishful thinking assuming that if your initial state may be fully described by classical physics of general relativity, the classical physics of general relativity will be enough to predict (within the usual classical accuracy) everything about the final state, too.

In other words, because Roger Penrose didn't really learn the tools of quantum gravity and string theory at the beginning, and indeed, he didn't, it follows that physics will never need them and everyone who studies quantum gravity instead of its classical counterpart is a lesser mind. ;-)

Well, it doesn't quite follow. :-) There is nothing wrong about the situation in which the laws of quantum gravity inevitably become important after some evolution that started "classically". Quantum gravity gives all the singularities a well-defined meaning and it always knows what to do - it's just its long-distance approximation, the classical general relativity, that may be insufficient to understand all the phenomena.

These are philosophies and only hard mathematical facts matter but I find it natural for the cosmic censorship conjecture to be violated. After all, the classical theory of general relativity has no fixed spacetime, so it allows for processes in which the size of many things changes - e.g. the expansion of the Universe. So there's no reason why it should ban regions of spacetime from shrinking into singularities.

Well, it's still plausible that in some weakened form, Penrose's conjecture is true in 3+1 dimensions. I would be foolish to have any overblown prejudices about such technical matters.
Luboš Motl v 10:12 PM
Share