In defense of Milankovitch by Gerard Roe

Just a month ago, I had some doubts about the validity of the Milankovitch theory because I had seen no truly convincing reconstructions. However, during our Nice retreat, Richard Lindzen told me - privately as well as in his talk - about the following 2006 paper by Gerard Roe:

Just to remind you, the Milankovitch cycles are periodic astrophysical or orbital phenomena that were claimed by Milutin Milankovitch to explain the glaciation cycles - the ice ages and the interglacials. The idea is that these cycles change the amount of sunshine near the Arctic circle which was claimed by the Serbian scholar to be globally important.

In particular, the axial tilt is changing between 22° and 24° or so with the periodicity of 41,000 years. The precession takes 26,000 years to be completed. The eccentricity variations take something like 100,000 years: recall that eccentricity measures how "non-circular" (elliptic) the Earth's orbit around the Sun is. And there are a few other, less important cycles with similar periodicities.

These cycles roughly have the right periodicity. However, it was still noticed that it didn't quite work: 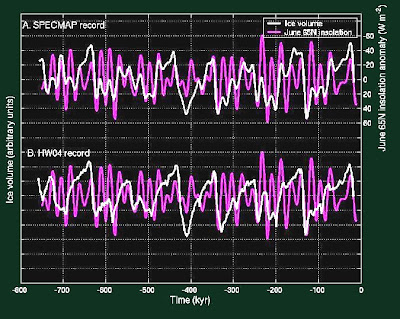 The graphs above are just unimpressive. A lag of 8,000 years has to be added by hand to make it at least remotely plausible. There's no real agreement over there.

The reconstructed ice volume - the white curve that is based on ice core data - is dominated by the slow cycles that take 100,000 years to be completed while the theoretically calculated insolation at 65 °N - the purple line claimed to be responsible for these changes of ice volume - is dominated by the faster cycles that only take 20,000 years or so to be completed.

However, Gerard Roe realized a trivial mistake that had previously been done. And a similar mistake is being done by many people all the time - scientists as well as laymen; alarmists as well as skeptics. The problem is that people confuse functions and their derivatives; they say that something is "warm" even though they mean that it's "getting warmer" or vice versa.

In this case, the basic correct observation is the following: If you suddenly get more sunshine near the Arctic circle, you don't immediately change the ice volume. Instead, you increase the rate with which the ice volume is decreasing (ice is melting). Isn't this comment trivial?

Nigel Calder knew that this was the right comparison to be made back in 1974.

So the right quantity that should be compared with the insolation - i.e. the sunshine near the Arctic circle - is not the ice volume itself but its time derivative. No doubt about it. This "fix" is analogous to the transition from the Aristotelian science to the Newtonian one. ;-) By taking the derivative, the faster, high-frequency, short-period cycles in the ice volume are amplified while the very slow ones (100,000-year cycles) are suppressed. 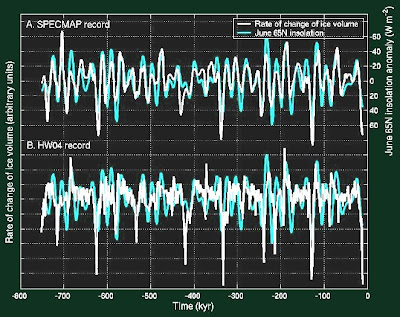 And you clearly get a spectacular agreement between the theoretically calculated insolation curve (cyan) and the derivatives of the reconstructed ice volumes (white). Moreover, this model requires no lag to be adjusted and no significant CO2 forcing to be added if you want to reproduce the data very well. Roe explicitly mentions - even in the abstract - that CO2 is not needed; moreover, it's changes are lagging so they are (mostly) consequences, rather than causes, of the ice-volume and temperature changes.

After having seen this paper, as far as I can say, the Milankovitch orbital cycles do describe the glaciation cycles in the recent 1 million years very well and nothing else - CO2 or random internal variations - is needed to account for the bulk of the data. Of course, if you drew the "integral" of the functions above, the agreement could be worse - haven't tried it - but it's clear that the empirical evidence supporting the Milankovitch link is stunning.

So the amount of sunshine that you get near the Arctic circle is actually more important not only for the regional Arctic climate but, indirectly, for the global climate as well. The global climate is determined by the residual impact of the local variations, instead of the other way around (which is what the "global" warmists would like to believe).
Luboš Motl v 12:08 PM
Share