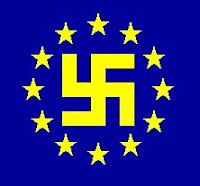 In this audio, Nick Griffin, the chairman of the U.K. nationalist BNP party, claims that the EU Parliament is planning to add Europe to "The International Environmental Law Court" (is it this one?) that may also try to punish climate realists for their being realists.

When Griffin asked whether the court would also go after climate skeptics, he didn't get a straight answer. But after some time, the answer was essentially Yes.


Well, there exist reasons why you may want to remain skeptical and cautious about the testimonies of the BNP chairman, not only because of his obsession with his nation and its language, among other things without a global importance. But he may be right, too.

I wonder whether those guys would actually be willing to prosecute e.g. the Czech president who may be among the first people to be "sued" by the green brown shirts. That would be a declaration of war against the Czech nation.