Nixon was told: sea level would rise by 10 feet in 31 years 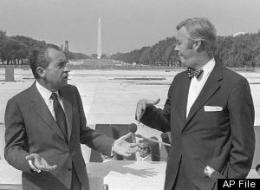 Richard Nixon was a Republican and he had to leave his office.

But you can see that he's being worshiped by some environmentalists (and by Jon Stewart during a recent show about the failed energy-independence promises of the latest 8 U.S. presidents) as their patron. After all, it was him who founded the Environmental Protection Agency (EPA) and introduced many other green laws. And he has also endorsed the first Earth Day in 1970.

Daniel Patrick Moynihan was a top Democrat, a Senator and the U.S. Ambassador to the U.N. and India. However, in the Nixon administration, he served as an influential advisor for Urban Affairs.

A Spanish translation of the text below is available.

MSNBC and The Huffington Post, among others, reveal that Moynihan wrote a freshly unclassified memo to Nixon (via his assistant John Ehrlichman, a key initiator of Watergate) in September 1969, long before the issue became popular (and even years before the new ice age became fashionable), where he urged him (and NATO) to introduce a global CO2 monitoring system.

He talked about "projects of apocalyptic change" going mainstream and the possibility to conceive "fairly mammoth man-made efforts to countervail the CO2 rise, e.g. stop burning fossil fuels". And he described the quantitative consensus of his time as follows:


There is widespread agreement that carbon dioxide content will rise 25 percent by 2000.

This could increase the average temperature near the earth's surface by 7 degrees Fahrenheit. This in turn could raise the level of the sea by 10 feet. Goodbye New York. Goodbye Washington, for that matter.

Back in 1969, no serious action against CO2 began because Hubert Heffner, a science vice-czar, answered that there were actually two camps, namely global warming doomsayers and global cooling doomsayers. "One group says we will turn into snow-tripping mastodons because of the atmospheric dust and the other says we will have to grow gills to survive the increased ocean level due to the temperature rise," he wrote.


They could have computed the average prediction - and the average of +7 °F and -7 °F is zero which is the warming that the Earth has essentially experienced. Unfortunately, the global warming doomsayers became dominant in the last decade or two which is why this averaging no longer works.

How accurate was the warning?

How did Moynihan's "widely agreed" figures succeed in describing the actual changes from 1969 to 2000?


Well, Moynihan's "widely agreed" predictions didn't succeed too well. The overestimates go from 80% in the case of CO2 concentrations to 2950% in the case of sea level. You know, predicting the sea level change that is exaggerated by a factor of 30 is not a terribly accurate prediction. ;-)

You may also note that the "fundamental physical" processes - such as the increase of CO2 - were being guessed more accurately than their "convoluted indirect consequences". The more links you have to include in the chain of reasoning, the more space you have to hide exaggerations into each step.

By this comment I want to emphasize how deeply correct was Michael Crichton in his Caltech lecture, Aliens cause global warming, where he traced the rise of global warming alarmism to the Drake formula to calculate the number of extraterrestrial aliens.

In both cases, the "quantity we're really interested in" is written as a product of many factors. If each factor is pushed just by "a few dozens of percent" in the desirable direction, the product may change substantially. But it is really the final result we care about - the number of aliens or the sea level rise (and other impacts of the "threat") - and these things end up hugely exaggerated. The sea level rise was overestimated by a factor of 30 and the number of aliens is probably overestimated by much bigger factors still (but these overestimates have a smaller impact on the world economy than the AGW hysteria).

In reality, many of the factors in the product are small. And the product is therefore small, too. If one divides "cheating" to many steps, each step may contain a "less striking" amount of cheating - if expressed as a relative exaggeration - but it is still the "total cheating" or "total mistake" that matters.