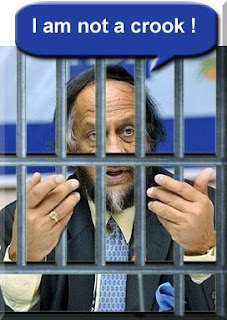 Weeks ago, various PC greenwash panels such as one led by Sir Muir Russell have at least called for openness in climate science:


“Climate science is a matter of such global importance, that the highest standards of honesty, rigour and openness are needed in its conduct.”

How did the IPCC chief, Rajendra Pachauri, implement these recommendations?

Well, he wrote a letter to the new AR5 IPCC members. To make sure that nothing will improve about the IPCC activities, they will need to "familiarize themselves thoroughly with established IPCC procedures." Concerning the openness, this is the new policy of the AR5 IPCC:


“I would also like to emphasize that enhanced media interest in the work of the IPCC would probably subject you to queries about your work and the IPCC. My sincere advice would be that you keep a distance from the media and should any questions be asked about the Working Group with which you are associated, please direct such media questions to the Co-chairs of your Working Group and for any questions regarding the IPCC to the secretariat of the IPCC.”

In other words, whenever you want to open your mouth, you must ask the general secretaries and other political apparatchiks of the IPCC to open their mouths instead.

Holy cow, what does this railway engineer think that he is? Another Saddam Hussein who is supposed to tell thousands of people whether they are allowed to speak and explain their work (and the answer is "No")? If he thinks he is another Saddam Hussein, it's OK with me, but he should also be treated in the same way. The beard shouldn't be enough to protect him. And yes, I do realize that Hussein was executed and the analogy I chose was no typo.

It's kind of stunning that similar people can stay - literally for years - in the top jobs of the U.N. institutions of the early 21st century. Some people try to deny that the IPCC is a political institution in which the member-scientists are nothing else than prostitutes paid and controlled by the actual leaders - political activists and "renewable" investors.

But to deny such an obvious fact, it is not a good idea to send an open letter to all the scientists that makes it very clear that they're not in charge of their work in the IPCC and they don't even enjoy the freedom of speech.

I can't believe that some people misunderstand that such restrictions are completely incompatible with the scientific integrity. In his 1974, Caltech commencement speech - Cargo Cult Science - Richard Feynman wrote the following about the scientists who advice governments:

One example of the principle is this: If you've made up your mind to test a theory, or you want to explain some idea, you should always decide to publish it whichever way it comes out. If we only publish results of a certain kind, we can make the argument look good. We must publish both kinds of results.

I say that's also important in giving certain types of government advice. Supposing a senator asked you for advice about whether drilling a hole should be done in his state; and you decide it would be better in some other state. If you don't publish such a result, it seems to me you're not giving scientific advice. You're being used. If your answer happens to come out in the direction the government or the politicians like, they can use it as an argument in their favor; if it comes out the other way, they don't publish it at all. That's not giving scientific advice.


The IPCC is fully based on the violation of these basic principles. Only the results that are convenient for the secretaries of the IPCC may be published; the scientists are de facto obliged to be silent about everything else. They're not giving scientific advice; they're intellectual prostitutes.
Luboš Motl v 10:00 AM
Share