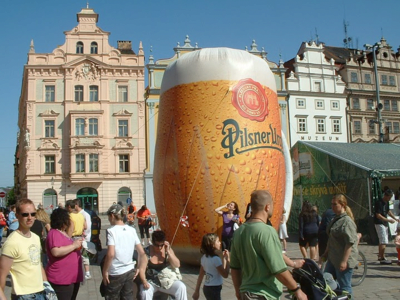 The 400 x 300 PNG image above has 225,173 bytes. It seems to capture an innocent event at the center of Pilsen, Czechia. However, that's just an illusion!

If you look at the picture above properly, carefully, and from another perspective, it's actually a 500 x 300 image with a detailed picture of the face of a very famous evil person who remains at large - and something that has made him or her famous.

The picture actually includes lots of text, too. To make this contest more inclusive, I neither endorse nor un-endorse the text as a part of this contest. ;-) Your task is to decode the image. In the right lower corner of the secret image, there is some text written in white. It starts with C.

To prove that you have decoded the image, open the fast comments and write another letter of the message that hasn't been written by the readers before you. If your character is a hyphen or a space, you write both "hyphen [letter]" or "space [letter]" where "[letter]" is the letter that follows.

To decode the image, you need some spying software. You will need your humble correspondent's favorite software (not only) for algebraic manipulations. You may buy it from a link in the right sidebar - under the software's logo.

To obtain the required code that works under this system, Google search for

where [tungsten] should be replaced by its synonym. You download the relevant script from the "agent H" and the "agent B", execute all the necessary commands you need to execute, locate the final portion that is able to decode images, and substitute the 225,173-byte PNG Pilsner image above as the input. You should see the secret image that is hiding behind the innocent glasses of Pilsner Urquell.

Then you can just prove that you're one of the great spies of The Reference Frame. :-)

Most of your comments may fall into the moderation queue - but I should still be able to see whether you have actually decoded the picture or not.


If the task above was too easy for you, try a harder one. Download this summer music video, We're Going to Ibiza, save it as AVI, and use a similar algorithm to unfilter the music noise and to obtain a 3-hour movie about the discovery of the Higgs boson at the Tevatron, including all the technical data. Is the particle at 115 GeV?

First, you will have to isolate high-frequency motion from the song above which will give you another music video, We're Going to Barbados. Once you burn this second video on a DVD and throw it into a near-extremal Kerr black hole, the Higgs movie will be encoded in a simple way in the Hawking radiation.