Anthony Watts writes about some explosive yet amusing developments at scienceblogs.com, a blogging platform masterminded by the Seed Magazine - more precisely Seed Media Group because the magazine has been defunct for a year or so.

They recently wanted to add a new blog on nutrition, Food Frontiers (now on Pepsi websites), sponsored by PepsiCo: please feel free to buy two dozens of bottles or anything else from the amazon.com link.

The idea makes a lot of sense because Pepsi knows quite a lot about these matters and it is also doing a very good job in practice - as its successful market battles against CocaCola have demonstrated. They not only produce some tasty products - beverages and food - but also know how to package it in an efficient and environmentally friendly way, among other things.

There was no problem with transparency, either. The first article on Food Frontiers mentioned that it was an extension of their corporate blog, the authors were PepsiCo employees, and that it was "presented by PepsiCo". An absolutely flawless setup.

However, the Seed Magazine happened to forget that their blogging platform has been built upon a time bomb. The magazine has filled their server with dozens of unhinged activists who pretend to be interested in science but whose real passion is radical left-wing politics.

These "thinkers" make Leonid Brezhnev look like Milton Friedman in comparison. (By the way, Brezhnev didn't really believe the communist ideals; he would prefer the scientific-technological revolution and brute power instead.)


The list of these "thinkers" includes the self-described "Godless randomly ejaculating liberal" Paul Z. Myers, the top climatic Wikipedia censor and U.K. Green Party apparatchik William M. Connolley whose Stoat is "taking science by the throat" (his words!), Tim Lambert with his Deltoid, and many others whose names remain actively unknown to us - thank God.

(I follow dozens of blogs including "gems" such as CapitalistImperialistPig but none of the SB blogs is anywhere in my bookmarks.)

So once they learned that Seed could have any link to a free and therefore evil capitalist corporation, dozens of them began to leave scienceblogs.com. Isn't it a scandal for a corporation that has studied their consumers' nutrition since 1890 to say something about nutrition, its current state, and its future? Only clueless communist bloggers have the right to speak! P.Z. Myers himself started the revolt by his polite text titled


Say hello to... PepsiCo? What the fuck?

which forced all other SB bloggers to participate in this insane anti-capitalist protest, too. 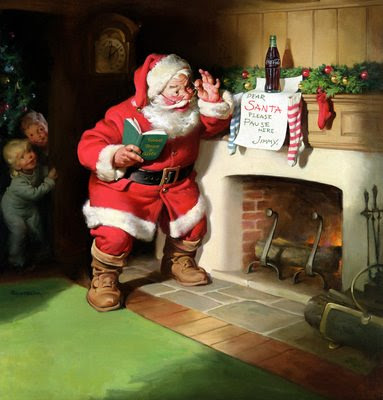 Does P.Z. Myers hate Pepsi because he's been hired by its leading competitor? Don't believe it! ;-)

Those who realized that their blogs have been failures (e.g. mad Marxists Bora Živkovič and GrrlScientist) have left the SB platform; others such as Myers himself who have collected a sizable ring of visitors and who earn thousands of dollars a month from their blog decided to go on "strike" and push the Seed Magazine to become a hardcore communist company behaving according to their image.

The Food Frontiers SB blog was murdered within 36 hours.

There's only one sensible thing that the Seed Magazine can do: they should tell all of their bloggers that the bloggers have no credentials to censor the flow of the information on scienceblogs.com and that any blogger that will publish complaints against the Seed policies on the Seed servers will see his or her blog deleted.

The Seed Magazine has to get rid of the tons of the stinky communist garbage pretending to be "science" that the magazine has accumulated over the years. It has to try to build a balanced, ideologically neutral community instead. If it fails to win this battle, it will eventually be controlled by the likes of P.Z. Myers and their similarly radicalized readers which is not only a path to a complete violation of the basic ethical principles but also a path to their eventual financial bankruptcy.

P.S.: Your humble correspondent was offered to join the scienceblogs.com platform in 2006 and I had nothing substantial against it.

Figure: Myers is a liar; I got a full contract with all the rules to sign; in 2006, scumbags such as himself were not deciding about these Seed Media matters. After this article of mine was written, I learned that Katherine Sharpe was among the main people who would invite bloggers back in 2006 and I was among those who were invited by her.

The purely technical considerations such as the stability of the URLs and traffic and the control over the design - and independence in general - decided I would say no.

Of course, as the composition of their bloggers "crystallized", I found many new reasons why I would say No. If you were a SB blogger who is not a mad communist like them, they could cause you lots of trouble just like they did to the proposed Pepsi nutrition blog. It's always dangerous to live in a vicinity of a leftist, especially if there are many of them - it's always a threat for your basic human rights.

If TRF or WUWT were hosted by scienceblogs.com, they could disappear within minutes. You know, Google and its blogger.com is just a generous beacon of freedom in comparison. And I do believe that the recent temporary disappearance of TRF was a minor technical glitch without a serious systemic error and without consequences: what would be left if even this belief had to be abandoned?

By the way, P.Z. Myers boasts that he decides who can blog at SB and who cannot. And it is mostly true, indeed. It reminds me of the misinformation that I was fired from Harvard. Well, I had a contract for several more years and I resigned once my visa expired (and I decided not to work on any green card or new H1B back in 2005 when the feminazi terror against Summers began).

But you can easily see that it doesn't really matter. I was almost existentially threatened by the Marxist activists. Within a short time, the likes of P.Z. Myers that have contaminated all universities could not only fire me but destroy me, too. Much like Stalin (a Georgian weather scientist who would become the Soviet dictator), Kim Jong-il, or any other villain of this kind, they think that their left-wing ideology gives them the right to control everyone else's lives, speeches, and opinions. I had to escape to safety; it's that simple.

The idea that a left-wing academic or a Green Party official is more honest or is expected to be more accurate if he is not paid by PepsiCo is utterly preposterous. These people are paid from many other sources that also influence what they write - and sometimes what they believe. They're creating their image within certain communities that indirectly brings them (fake) prestige and (real) profit, too.

There's nothing wrong about capitalist companies, corporate-sponsored research, and professional blogs. In fact, I believe that certain "strictly applied" and relatively "short-term" disciplines of science - such as the science of nutrition - should be studied exclusively in the commercial sector, otherwise the taxpayers' money are being wasted.

P.S. II: To demonstrate that scienceblogs.com has almost nothing to do with science these days, let us look at the five currently most active articles on their server, according to the main page of scienceblogs.com:
As you can see, science is virtually non-existent over there and everything is biased left-wing politics. But they still have the breathtaking arrogance to attack PepsiCo's scientific blog on nutrition as insufficiently scientific for them. Just compare the SB blogs with Food Frontiers when it comes to their scientific content; FF is almost insanely and boringly technical. WUWT and TRF are somewhere in between but closer to FF than the SB blogs.

Half a day after the list above was reproduced, it changed. The currently most popular or active article on scienceblogs.com is called Shaking the nuts and it is an intellectually vacuous reply to this post of mine and the post by Anthony Watts (aside from an episode with a conservative encyclopedia entry).

Note that he has to be shaking the nuts because his blog is composed out of "random ejaculations". :-)

Myers' reply builds on the fact that his website is being visited by 100,000 mindless morons a day who enthusiastically join Myers' attacks on anyone who is called "right-wing" in any sentence. 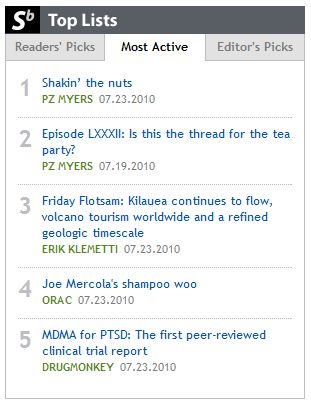 Congratulations, Seed! The most successful article on the Seed Media blogging platform is an irrelevant emotional appendix attached to the 3,600th most important and 56th least scientifically valuable article on The Reference Frame. Dear Seed Media Group, that's where you have arrived by your permanent licking of the arses of these far-left loons.

(No, "charlystone". I am not gonna write another "response" to the randomly ejaculating scumbag. The Reference Frame is a quality science blog, not a place to amplify insults by mindless bigots. The fact that an imbecile writes a text about me that is read by 100,000 other imbeciles isn't a sufficient reason for me to write a text on TRF.)

P.S. P.Z. Myers has published a detailed scientific response to my points addressed to his 28,000 Twitter followers. Here it is.

P.S. again Luis Dias, a Pharyngula reader, points out in the "Shaking the nuts" discussion thread that he was surprised that Mr Myers has openly boasted that he could eliminate new bloggers from the SB ring - and censor the flow of the information in this way. Various Pharyngula faithful are telling him that he's... wrong, politely speaking, but they offer all kinds of reasons that contradict each other.

Some of them say that Myers has never had any control about any such issues. Others say that it is completely normal not to admit people who don't "fit in" - such as Pepsi folks or TRF. Anyone who is not a leftist liberal. Indeed, this rule is routinely applied in the company called the Academia.

However, when it comes to groups that the liberals worship, such as some of the people of color who usually don't fit either and who may be incompetent at the same moment (unlike the Pepsi nutrition folks), it would be a discrimination not to hire them! The hypocrisy of these people is just amazing. If your society doesn't put these dangerous power-thirsty radicals in the jail soon enough, they will eventually put you in the jail - or hang you.
Luboš Motl v 4:54 PM
Share