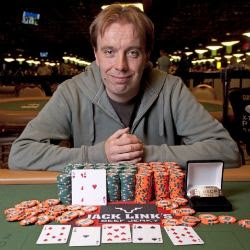 Marcel Vonk, a Dutch string theorist currently working in Lisbon, has won the sixth and final championship of the 2010 World Series in Poker on July 5th.

That came with $570,960 in prize money which is about 1/2 of the Nobel prize (minus the positive feedbacks and the more eternal fame of the latter). Congratulations!

His work about the transitions between Calabi-Yau topologies has been mentioned on this blog. He's been also working on topological strings, NS5-brane partition sums, twistor-inspired rules in field theory, and type 0 old matrix models (or type 0 2D string theory).

Marcel has co-authored papers both with Robbert Dijkgraaf, the boss of IAC and the initiator of the IPCC review panel, as well as with Erik Verlinde who recently decided that gravity doesn't exist for him - as he told Dennis Overbye during their lunch on May 20th - but he's not yet certain enough to try to jump out of the window. :-)


These two Russian students did jump from the 21st floor of their Lomonosov Moscow University but they kind of cheated so the video above can't be viewed as evidence that supports Erik's model. :-)

Today, on The Takeaway, a radio show, Erik Verlinde added one more twist to this story about gravity and death:

In the 7-minute program, it's been said that gravity is not like magnetism (deep but not much); it’s great to throw away assumptions and to be like Einstein (be my guest); gravity comes from the information.

The host actually proposed something that does follow from Verlinde’s picture – and is silly at the same moment. When a man dies, his entropy goes up, so he can no longer resist gravity, so he falls down. That's why gravity attracts things.

Verlinde confirmed that this was a good description of the idea. Gravity comes from being partially dead and disordered. (Needless to say, any proposition of this kind completely violates the equivalence principle that states that gravity always acts equally on all objects, dead and living, ordered and disordered.) Verlinde also says that “eventually”, his zombie theory of gravity may be tested by colliders and especially cosmological observations.