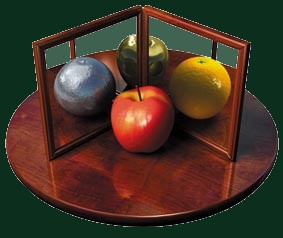 The Reference Frame is the only well-known website in this Solar System that defends supersymmetry as the most likely next experimental discovery in high-energy physics. Others in the "public sector" apparently have no clue.

He puts the increasingly likely observation of SUSY into the context of the early 1980s when people like him got excited by physics during lectures by Stephen Hawking et al. Gibbs was pretty much trained to respect SUSY; I wasn't. As an undergrad in Prague, I was brought up to believe that SUSY was stupid.

All my positive attitudes to these state-of-the-art theories, including string theory itself, were always partially a matter of revolt against the establishment (although such a revolt was never among my main goals). Of course, the "official" opinion of my environment changed when I came to Rutgers in 1997.

Let me mention that around the same time, in the mid 1990s, your humble correspondent got excited by texts by Phil Gibbs such as the Event-symmetric spacetime, advocating the permutation of all spacetime points as a principle to build valuable physical theories. If you click at the link, you will see a Prague-based copy of Gibbs' old web pages that I couldn't have edited - or erased - for more than a decade. The server managed to survive, anyway.

However, it's still true that the musings about the permutations of points in spacetime (and on the world sheet, as I figured out) have played a positive role in my discovery of matrix string theory in late 1996. I appreciated that a configuration of one long closed string and two shorter closed strings wound around the same 8-shaped path in spacetime can only differ by the permutation of the "connecting information" about the structure of the intersection point.

The "number of strings" operator had to be ill-defined and emergent. As long as you treat all local permutations of a configuration democratically, all the states with different numbers of closed strings have to belong to the "same sector" and matrix string theory eventually realized this picture of stringy physics perfectly.

A non-perturbative, exact description of 10-dimensional stringy vacua emerges from matrix string theory as a bonus.


One barn at the Fermilab 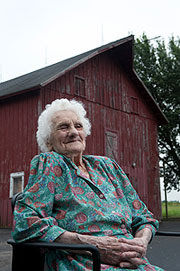 Jeanette Anderson turned 100 years old three weeks ago. Her barn celebrates 100th birthday this year, too. Her home became a part of the Fermilab and her barn whose cross section is shown on the picture above became the unit for the cross section in particle physics.

In reality, the physicists found Anderson's barn way too big. So they developed a miniature model of it whose area is 10^{-28} square meters. But they still call it one barn, in order to remember Ms Anderson's sacrifices for physics. Even though the proton-antiproton collisions have a cross section of 0.1 barn or so, a barn is still way too big a unit for the most valuable processes that the Fermilab is trying to find in the haystack of recent data - processes whose cross section is closer to a femtobarn, or 10^{-15} barn.

Ms Anderson wouldn't be able to store too much food in her modern femtobarn. However, it could be big enough to hide Mr Higgs who is famous for the mechanism originally envisioned by physicist Philip Anderson who is probably not Jeanette Anderson's relative (unless Charles Darwin is right).
Luboš Motl v 3:49 PM
Share