Czech speaker of the House against AGW panic 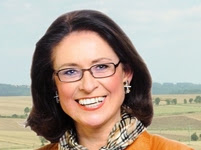 Friday, August 13th, 9:43 pm - The speaker of the Czech House of Representatives (our conservative Nancy Pelosi) and the first deputy chairperson of the (right-wing) Civic Democratic Party (ODS), Ms Miroslava Němcová, doesn't believe in the man-made global warming theory. She informed the parlamentnilisty.cz (Parliamentary Letters, or Czech "The Hill").

"I don't believe in the theory of man-made global warming. Under the ice sheets that exist today, houses used by humans have been found which makes it clear that the contemporary man is not to be blamed for the oscillating temperatures. Nature undergoes certain cycles that can't be attributed in as short a time frame as 10 or 20 years. Moreover, it has been leaked that the Intergovernmental Panel for Climate Change has been fabricating its reports. Even this finding should open our eyes a little bit and we should keep our cool," Němcová told our editors.

The planet is blue, not green

The speaker of the house has also revealed that she has read Czech President Václav Klaus' book, "Blue Planet in Green Shackles", which she found very inspiring and which she has studied carefully. The Czech president has been a long-time critic of the man-made global warming theory and he often clarifies his doubts at international forums.

We will command wind and rain

"This whole issue surrounding global warming reminds me of the communists who wanted to command the wind and rain. Man is not a foe of Nature; he is one of its components and it is not necessary to apply radical policies that used to be introduced e.g. by the ex-minister of the environment Mr Martin Bursík," Němcová believes.

She is happier when Mr Pavel Drobil (ODS) is the new minister. In her opinion, his policies will be environmentally sensitive but at the same moment, he won't try to reduce the economic growth.

Solar activity is behind the warming

According to a new Russian-German study, global warming has most likely not been caused by the mankind. According to its results, throughout the majority of the second half of the 20th century, the Arctic summer temperatures were lower than their counterparts at the beginning of the Industrial Revolution when the concentration of the so-called greenhouse gases began to increase. The analysis therefore disputes a direct relationship between the increasing temperatures and industrial emissions. The investigation is based on an analysis of tree rings of pines on the Kola Peninsula.


The warmest years on Kola were apparently in 1935-1955. After this period, the temperatures began to decrease before they returned to the growth after 1990. The researchers have pointed out that the period of 1935-1955 coincided with the maximum recorded solar activity. The increases and decreases of the mean temperatures may be caused by nothing else than the solar activity. The research was carried out by experts from the Botanics Institute at the Hohenheim University in Stuttgart and their Russian colleagues from the Helmholtz Center for Environment.

A similar opinion is shared by the American climate scientist and emeritus professor of environmental sciences at the University of Virginia, Fred S. Singer. "One needs to be brave to stand against the prevailing opinion in the way that was chosen by Václav Klaus. The global warming groupthink has been joined by the opponents of the economic growth, the champions of the central control of the human life, scientists dreaming about research grants, international bureaucrats, and everyone else who makes a profit out of the climate fears. Nature will show that they have been mistaken," Fred Singer stated some time ago.

By the way, interestingly enough, most of the commenters on this particular server (parlamentnilisty.cz) seem to be against Klaus and probably also AGW alarmist, unlike the vast majority of news servers in Czechia.
Luboš Motl v 9:16 AM
Share