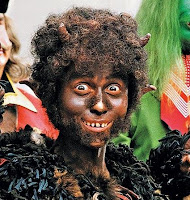 The Observer has printed a rather incredible piece that makes most of the propaganda pieces of Nazism and communism look like friendly fairy-tales for children:


A dark ideology is driving those who deny climate change

The deniers are wrong because 2,000 mostly drunk people around Moscow drowned in the rivers and lakes and because it was a warm weather in Moscow. Why were they drunk? Because you're deniers, dear TRF readers!

The author of the piece, Robin McKie, uses an amusing collection of irrational and downright bizarre sources to sling mud on the climate skeptics. One of them is a book called Merchants of Doubt by Naomi Oreskes and Erik Conway.

Click the link for a review of the book.

These two "pundits" have raised one of the most serious accusations ever invented against the climate skeptics: some of the oldest or dead climate skeptics have actually dared to oppose the Soviet communism! Wow.

The most radical ones even didn't want to allow the Soviet Union to exterminate the evil U.S. capitalists by nukes which would be fair - and the real fringe has even supported the Star Wars that helped the Devil named Reagan to beat the best social system in the world.

This is quite an explosive accusation! ;-) Imagine Naomi Oreskes who is having sex with an inflatable Stalin 16 hours a day as she manages to discover this genuine bombshell that must surely put the final nail in the deniers' coffin. ;-)

Reagan, the denier-in-chief, was caught as speading jokes about the USSR.

More seriously, I find it kind of amazing what kind of arguments these folks are using these days. The legitimate concern is that those panicked people are fanatical defenders of the extreme forms of the "updated" communism - and what their arguments are actually doing is to provide us with a more robust proof of this observation than anything that could actually be made up.


Fortunately, a vast majority of the readers don't buy these articles and would-be arguments anymore: check the discussion in the Guardian. The AGW movement is returning to the status it deserves - and it surely deserves to be on par with the fringe nationalist or Marxist groups.
Luboš Motl v 9:06 AM
Share