N=4 maximally supersymmetric Yang-Mills theory is quite an important theory. It is arguably the most important four-dimensional local field theory in the Universe. First, notice that it is uniquely determined by the assumption of the maximum of 16 supercharges for a non-gravitational field theory (plus 16 additional superconformal generators that add up to 32 Grassmann-odd generators which invisibly make the gauge theory gravitational, as discussed from the next sentence on).

The theory is also equivalent to the superselection sector of type IIB string theory on the AdS5 x S5 background with an RR flux; that makes it the most studied example of the AdS/CFT correspondence. The N=4 SYM has been used to describe heavy ion physics, hydrodynamics, superconductivity, and other things because the AdS/CFT duality is most controllable in this case.


Independently of all that, in late 2003, Edward Witten began to use Roger Penrose's twistor tools to study the on-shell scattering amplitudes of the gauge theory (which have a problematic interpretation at a loop level but they can be formally defined). This twistor approach has led to remarkable new insights and has brought a potential "complete solution" of the theory - a goal that has been dreamed about for years - closer to reality.

This research has also led to the Britto-Cachazo-Feng-Witten (BCFW) proof of the tree-level recursion relations between the amplitudes.

As the people's knowledge about these twistor insights was increasing, the research began to increasingly overlap with another "minirevolution" in field theory that was sparked by Berenstein, Maldacena, and Nastase (BMN) who showed in 2002 that the N=4 SYM theory also contains excited strings with the right energies. People knew that because the AdS/CFT duality clearly works and a background of the full string theory stands on one of its sides. But they were still surprised that it could have been proved so explicitly. The right interactions and other things were later shown to be reproduced by the field theory, too.

Because spin chains and similar "integrable" objects began to be used systematically, the BMN "minirevolution" has gradually transformed into the research of integrability of N=4 SYM. People were increasingly certain that there is a huge, infinite-dimensional unusual symmetry - the Yangian symmetry - that heavily restricts the N=4 SYM amplitudes and that probably explains why some of the amplitudes could have been calculated analytically, e.g. by the twistor methods.

The research initiated by the twistor "minirevolution" by Witten used to be really successful for tree amplitudes only. However, partial results were accumulating for the loop amplitudes, too. Today, there are two preprints about the extension of the BCFW recursion relations to all loops.

I do believe that the first paper - which is also the first hep-th paper today - is more complete but I haven't read the full papers so I will mention both:


The papers, especially the first one, extend the BCFW recursion rules from the tree level to the whole theory, including arbitrary loops, in such a way that the previously mysterious Yangian symmetry of the theory becomes manifest!

In this picture, loops may be identified as an entangled removal of pairs of particles. Such an interpretation explains their relationship to the integrals over lines in the momentum-twistor space but also explains why the Yangian symmetry de facto determines the whole behavior of the theory.

So the authors, including a Czech PhD student at Princeton, Jaroslav Trnka, may use their explicit form of many things to easily tell you what is e.g. the NMHV 2-loop amplitude for 6 or 7 external particles! ;-) They may add crisp expressions for 3-loop MHV amplitudes for 5 particles, too.

The 2-loop and 3-loop amplitudes are extremely simple but I will offer you an even simpler 1-loop amplitude for 6 external particles - that you may easily print on your T-shirt as long as you use the state-of-the-art printing technologies: 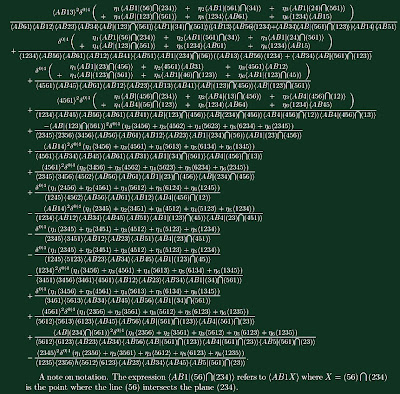 The leading singularities - which you may view as simple "infrared anomalies" - and the extensive symmetry of the theory made it possible for the amplitudes to be almost solved. For other theories, even if they have a planar limit, the process may be much tougher. At any rate, it is clear that many of the concepts that were only "vaguely felt" - such as the infinite-dimensional symmetry and the role of the twistor space - began to be demystified.

Of course, it remains true that all these breakthroughs only "solve" the on-shell part of Yang-Mills theory - the external particles have have null momenta. The compact expressions behind off-shell physics of the supersymmetric Yang-Mills theory, and off-shell physics is needed for the theory to be relevant for the AdS/CFT correspondence (and, consequently, for quantum gravity or string theory), remain a mystery.

It is not clear whether they can be cracked by an "extension" of these on-shell results and I actually think it is more likely than not that such an extension of the methodology won't work.
Luboš Motl v 8:57 AM
Share