One of the examples showing that the existing composition of the climate science community makes it impossible to achieve "collective" progress even in the elementary scientific questions is the hockey stick controversy.

It was almost a decade ago when it was understood - mostly by Ross McKitrick and Steve McIntyre - that the MBH (Mann-Bradley-Hughes) methodology is flawed because it assigns a higher weight to proxies and their time series that do exhibit a greater overall change (warming) in the instrumental period (20th century) than in the previous centuries.

In a big enough ensemble, a fraction of the proxies (e.g. tree ring widths) inevitably possesses this property (having a bigger 1900-2000 change than e.g. 1700-1800 change) by chance, even though they're not correlated with the temperature. Because of this property, their voices are being "amplified" and they contribute to the "reconstructed temperature" according to the MBH methodology (because, according to Mann, this methodology "calculates" that such proxies are better because they are "more correlated with the thermometer readings"). And their average may be seen to look like a hockey stick.

It means that the hockey stick graph is generated even from the random data, as long as they are continuous, e.g. as in red (Brownian, i.e. random walk) noise.

Some time ago, I have provided the TRF readers with a simple Mathematica notebook that  produces such a nearly perfect hockey stick out of the random data:

Steve McIntyre was kind enough to claim that your humble correspondent, together with McIntyre, David Stockwell, and Jeff Id, discovered this phenomenon independently (click and search for my name).

I think he's being too generous here - and not only here. I have only "rediscovered" the phenomenon because I knew what the result was. And I knew it because it was written in the McKitrick-McIntyre paper, even if the "localized explanation" why the methodology misbehaves in this way may have been missing or too cryptic - lost in between many other criticisms, usually those focusing on individual trees and other minor points. 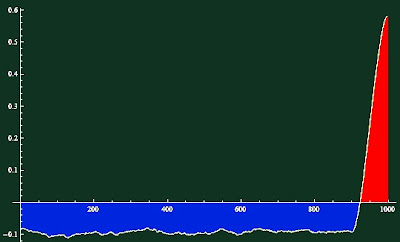 Temperature "reconstruction" obtained from 5,000 "trees" with random-walk records that are completely unrelated to temperatures. The x-axis depicts the years 1000-2000. The behavior of the "trees" in the last 100 years was compared with a linearly increasing "thermometer" function to give the proxies a weight.

At any rate, it is damn obvious that the methodology is incorrect and its "hockey stick" conclusion about the historical temperatures is unsupported by the actual data. It may be right, more likely, it is wrong, but Mann et al. have surely found no positive evidence that it is right.


Why are there still people, including people employed as climate scientists, who claim that they don't realize that the Mann methodology is flawed? They're clearly not up to their job. Could someone please finally fire them? One of the reasons why some laymen may fail to get the point is that they just don't understand the technology, not even the simple argument above. They're waiting for journals.

Well, a prestigious statistics journal, Annals of Applied Statistics, has just scheduled a paper for publication in the next issue. The paper has the same content:


McShane and Wyner: A Statistical Analysis of Multiple Temperature Proxies: Are Reconstructions of Surface Temperatures Over the Last 1000 Years Reliable? (full text PDF, backup, Google Docs Viewer as a HTML)

McShane and Wyner 2010 has 2.5 MB and 45 pages in this format and it shows that the MBH-selected proxies are actually leading to worse predictions than their fake data. The Mann proxies won't score well in their match against more sophisticated null hypotheses. You will find explicit sentences that you have seen written on this blog many times, for example


Well, this point has been known at least for 7 years but maybe, some of the people suddenly start to take notice when papers with this no-longer-original finding start to appear in conventional peer-reviewed journals. It's sad that science has to go through these irrational political battles when nasty folks and aggressive crackpots of Mann's type - who should spend their lives in jail - may prevent knowledge from disseminating for 7 years. But even in the real world, the lies have short legs, after all. They can't get too far.