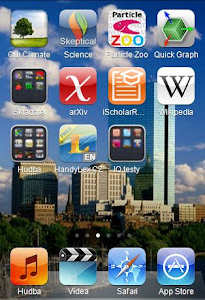 This is not the most spectacular text on The Reference Frame but it was written on and sent from iPod touch.

OK, one paragraph was enough so let me edit it with a bigger keyboard which is still a bit faster. ;-)


I am amazed by the technological progress that has taken place. This 3rd generation iPod touch device boasts 64 GB of flash memory - which is one million times more than what we used to have on the beloved box we called Commodore 64 when we were kids. :-)

Since the frequency of the processor is about 1,000 times bigger as well, it shouldn't be shocking that Apple could produce quite an exciting user interface and others could offer 200,000 sometimes great apps.

There is only one "major" classical button, the Home button, besides the Sleep and VolumeAdd/VolumeSubtract buttons on the rim. Everything else is controlled by touching the displej. You usually "tap" - or sing-click - the display to choose something. You quickly learn the typical places where the buttons are located.

The keyboard naturally appears on the display whenever you need to write something in a form etc. It's not hard to learn to type rather quickly on the keyboard as well although it can't compete with a classical one.

By touching images with two fingers, you may zoom pictures in and out. A double "tap" often gives you a bigger picture. You may configure a three-finger "tap" and "move" commands for an additional hardwave-level magnification.

An extremely smooth vertical (or horizontal) browsing through many items or long texts is achieved by "flapping": you quickly draw a "line" on the display.

The files and apps may also be synchronized with your PC or Apple - you should surely download the latest iTunes if you own such a gadget.

The device may detect orientation and acceleration. So many programs - such as the picture viewer - can show you things both in the portrait and landscape mode. It's very entertaining e.g. in the case of the built-in calculator. In the landscape mode, it has many more functions and a higher precision.

After three days of using, I can't be classified as an experienced user. ;-) But if you're thinking about buying such a thing, it may be useful to see what it can be used for. Let's look at the five screens of apps; you can switch between them by a horizontal "flapping".

A long "tap" over an icon switches you to a "shaky" mode where you can rearrange the ordering of the apps between the screens and on the screens. You can also merge them in folders if you move one app over another one. 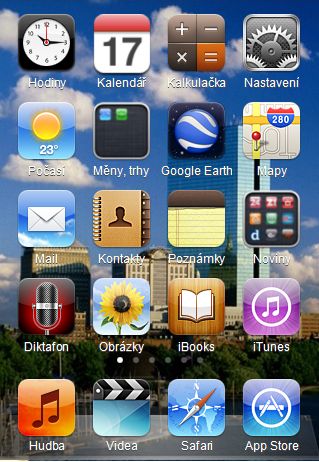 Screen 1: It mostly contains several standard built-in apps. Clocks remember time zones in your chosen cities, include alarm and stop watches. The calendar allows you to plan events in elegant ways. The calculator has the two modes, as I have mentioned. The settings allow you to set many things, including the airplane mode, languages of the keyboard, priorities of WiFi networks, locks and passwords, etc. etc.

The weather remembers the temperatures and cloudiness for your chosen places - horizontal "flapping" - for a week. The fifth item on the page is a folder - with two apps (not shown) classified as markets and currencies. Google Earth works as well as on your much bigger PCs, and so do Google Maps.

On the third line, there's a special app to receive and send e-mail - from Gmail or any other place. A list of contacts follows. Notes are the third. The last item on the line is a folder with 12 Czech and international news apps: ČT24, Z1TV, ÓčkoTV, Play.CZ (100 Czech radios), Metro (Prague newspapers), E15 (Czech euro newspapers), Deník (Czech regional dailies), ČRo (Czech public radio stations), AP Mobile, Fox News, NPR News, Al Jazeera Live. Many of them have live TV, recorded shows I wouldn't see if I used the ordinary Internet, and so on.

The last line has voice recording; picture viewer; iBooks where you can conveniently buy (sometimes for free) and read books reshuffled for the small display; and iTunes to buy music (and videos).

The universal line at the bottom has music player, video player, Safari web browser, and access to App Store. 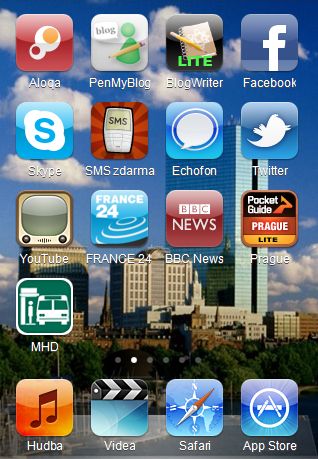 Screen 2: This screen is dedicated to various "standard" internet applications. It starts with Aloqa that detects your position - much like many other apps - and offers you restaurants and many other types of important places in your vicinity. Pen My Blog is a simple app that allowed me to write the first paragraph of this posting but it is pretty amateurish; other free alternatives such as BlogWriter didn't work for me.

On the other hand, the applications for Facebook, Skype, and Twitter (especially the Echofon one) look and work just great. Facebook and especially Twitter are easily compatible with the mobile devices because of the small size of the typical messages. "SMS zdarma" is a program to send free text messages in Czechia.

The last line boasts a nice app to deal with YouTube, two news agencies (BBC and France 24 that didn't make it into the 12-strong limit of the folder on the first page), a special program that should know everything about Prague sightseeings (you can find such stuff linked to any important place), and "MHD" which is not magnetohydrodynamics but rather a Czech abbreviation for public transport. It knows everything about the schedules of buses, trams, trolley buses, and the subways in nearly 100 Czech cities. Quite amazing especially if you realize it's given for free. 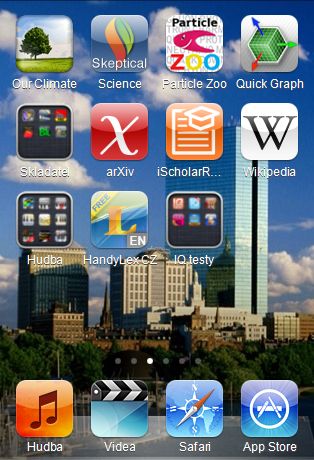 Screen 3: Here I summarized some science-related apps. Of course, it starts with Our Climate, the best app about the anthropogenic global warming. You also find "Skeptical Science", John Cook's alarmist app. His software engineers did a tolerable job but you can see that not only the content is amateurish and lacks the breadth and depth of "Our Climate": the user interface is sometimes imperfect, too. Particle Zoo is a funny list of all known - and some hypothetical (e.g. SUSY) - elementary particles. Each of them has a pillow with eyes and mouth that looks just like her. ;-) You can build your baryon from three quarks and it gives it a name. Quick Graph draws 2D and beautiful 3D graphs of functions. The rotation of the z=z(x,y) sheets is amazingly smooth and elegant.

The second line contains a "Skladatel" (Composer) folder with six piano apps - MusicStudio (even LITE) is really amazing. Well, I am misleading you. The "lame piano" apps were mostly put into the folder beneath this one. This one also contains Magic Lights (use your Apple device as lights for disco), iFlute, Blurbs - big texts running over the display - and Voice Change (add some helium to your voice).

On the same line, you also find an excellent app to work with arXiv.org. Yes, PDF files may be viewed pretty nicely, too. The relevant buttons are re-organized conveniently. It's not just a web page shown on a small screen! The Google Scholar app hasn't worked for me yet (update: it has! works in the landscape mode, too) - but the Wikipedia app looks nice, too.

The rest of the page has some Handylex CZ lexicons and a folder with assorted IQ tests that I haven't tried (beyond checking that the apps work). 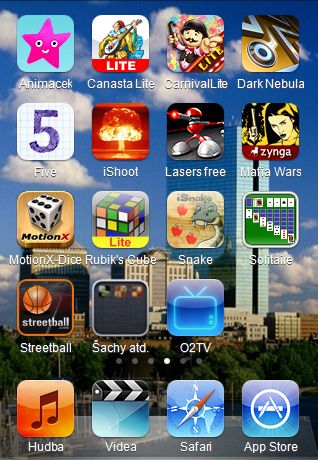 Screen 4: Well, that's a screen of games. Animáček Pexeso is a game that all Czech kids know (solitaire mode). I have no idea how it's called in English; you must rotate pairs of cards with images that match; the pairs are randomly distributed over the area. Canasta is a card game with slightly different rules than I am used to. Dark Nebula is a 3D game where a ball is rolling according to the actual gravity - tilt your device to control everything. Five is what we call "piškvorky" - make a row or column or a diagonal of 5 adjacent crosses on a grid, while the computer is trying to do the same thing with circles. ;-)

Add iShoot with some heavy shooting - I haven't actually tried yet. Lasers free with a puzzle to organize lasers to burn all objects. Mafia Wars that is normally played via Facebook - I will probably get a new Mafia Wars award once I run it successfully. ;-) (Update: no, the two versions of the game still don't co-operate with each other, so maybe no one has ever received the mobile award on Facebook.)

MotionX Dice throws a few beautiful dice that can be personalized - you may use the gravity sensor again. Rubik's cube, Snake, Solitaire (card game from Windows) are games that don't need to be explained much. O2TV is the schedule of all TV stations routinely accessible in Czechia. And there's a folder with Chess and Checkers applications. 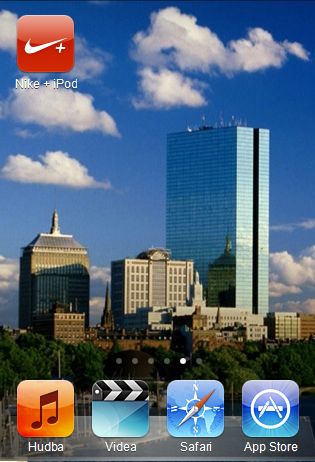 Screen 5: I am reserving the fifth screen - you can have up to nine of them or so - for applications that don't work. I don't have the special sensor for the Nike Shoes so this application attempting to assist me in my olympic trainings never manages to detect the pre-requisites. ;-)

I have also added some dysfunctional blog writing software on this screen etc.

To summarize, there are many procedures that are much more elegant on those little gadgets than they are on the desktop PCs. It will be fun to watch how these things eventually replace full-fledged computers in the contexts where they're superior. And let me say that I think that most of the ordinary people - who never write megabytes of text or programs and they don't need to compare excessive amounts of data as some of us - may indeed find the user interface that will evolve out of these gadgets to be much more natural and usable.
Luboš Motl v 5:31 PM
Share