Temperature variations are not increasing 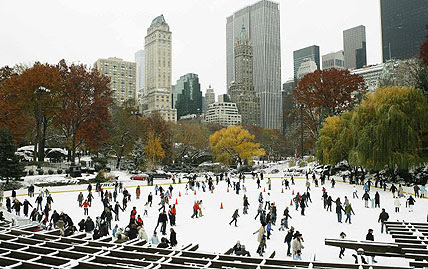 The increase of the global mean temperature - and most local temperatures - in the last 30 or 100 or 200 years is unspectacular, noisy, and somewhat questionable, but it is arguably based on the actual empirical data.

However, you may also often hear that the climate variations and extremes are increasing. Unlike the case of the global mean temperature, this statement directly contradicts the available thermometer records.

It is actually very straightforward to see that there is no such increase. Here is the self-explaining Mathematica notebook, based on the WeatherData function, and its PDF preview (25 pages) with the 48 municipal graphs: 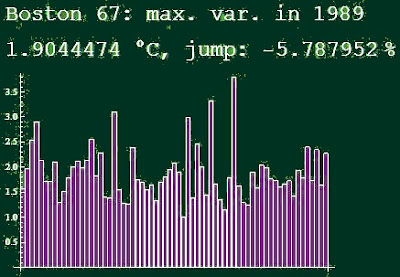 Typical month-on-month jumps of the temperature anomaly in °C in Boston between 1943 and 2009. The details will be explained later.

I somewhat randomly took 48 of the world's large cities. For each of them, I looked how many years into the past I can go to see uninterrupted monthly average temperature data. For many cities, it was 37 years - since the beginning of 1973. For some cities and their weather station, it was longer. Boston had 67 years.

For each of the 12 months in the year, I computed the average or normal temperature. By a subtraction, I calculated the temperature anomalies for all the available months. And then I looked at the jumps in the monthly temperature anomalies between all consecutive pairs of months. The next step was to calculate their "root mean square" - the square root of the average square of the 12 month-on-month differences, including December-January at the end (January 2010 was the last month I needed).


And I plotted these root mean square of the monthly jumps in the temperature anomalies for all 48 cities, as a function of the year. For each city, I computed the linear regression - the average and the slope. For some cities, there were some weird fluctuations. For example, Tokyo had a gigantic average jump in 1948. When I looked at the Tokyo data more closely, it turns out that WeatherData described an extremely cool June 1948, about 5 °C cooler than what you would expect (and cooler than May 1948). I don't know whether this dip is real or a glitch.

Otherwise all these graphs look pretty much indistinguishable from white noise - random independent numbers for each year. I will add the Mathematica source and its PDF preview later.

You see that the "continental" climates - such as Edmonton or Siberia - have the largest month-on-month jumps of the temperature anomalies. The root mean square is as high as 3.7 °C. On the other hand, the cities on relatively small Islands such as Honolulu or Port Au Prince but also places in Latin America and Australia have the smallest month-on-month temperature jumps of the anomalies which may be as small as 0.4 °C.

You see that since the 1970s, Brisbane, Novosibirsk, Montevideo, and Sydney have seen around 30% increase of the characteristic month-on-month jump of the temperature anomaly. On the other hand, La Paz but also Reykjavik and Morelia have seen 35-50% decreases. The number of cities that have experienced a decline of the variations slightly exceeds those that have experienced their increase.

But the difference is not statistically significant; the average of the overall percentage increases of the month-on-month jumps in anomalies is just minus 3.5% (a small decrease). Although I haven't made the calculations, I am convinced that the weekly, daily, or hourly changes of the temperature haven't jumped in the recent decades, either. And the same will hold for the variations of pressure, precipitation, and other quantities at arbitrary timescales. Feel free to check.

To summarize, nothing has been changing about the temperature variations on the monthly time scale during the last 40 years or so. Whenever someone will tell you that the variations, oscillations, or extremes are increasing, you may inform him or her about this analysis.