The unbreakable postulates of quantum mechanics

Many people try to use every opportunity to diminish the importance of the principles of quantum mechanics and to cover them by fog and shadows - even though they're the most important and most robustly established insights of the 20th century science.

Any quantum mechanical theory is composed out of two layers:
These two layers are largely isolated from one another. The first layer is universal for all quantum mechanical theories and one only needs to understand it once; the second layer has to be refreshed for each new physical system we want to study and for each description of such a system that is more accurate than the previous one.

Pretty much all the advanced mathematics of every modern physical theory is hiding in the second layer while the philosophy and all the "controversies" of quantum mechanics are concentrated in the first layer.


Fine. What do I mean by the postulates?
Again, these rules are universal for all quantum mechanical theories - and they hold for quantum mechanics of a single Hydrogen atom, for Quantum Electrodynamics, for the Standard Model, and even for all of String Theory.

The new thing about quantum mechanics is that the complex linear superpositions of two allowed states are also allowed states. How do we know that? Well, we may actually design procedures that create such combined states in practice.

For example, a particle may be found in Boston (B) and in Washington D.C. (W). Is there a way to continuously interpolate between B and W? In classical physics, the only way to interpolate was to think about positions between Boston and Washington D.C., such as New York (N): note that it is in between them alphabetically, too. ;-) We needed to think about a train between Massachusetts and Maryland.

However, in quantum mechanics, there's one more way to interpolate between the states B and W. We may consider states


where a, b are complex numbers. If (a,b) is equal to (1,0) or (0,1), respectively, we are back to the states B and W. Such a state will mean that the particle will "certainly" be found in Boston or in Washington D.C., respectively.

In quantum mechanics, a and b may be both nonzero. You can construct such a state by putting Boston and Washington D.C. behind the slits of a two-slit experiment and by adjusting the path between the source of the particles and the two cities. If you do things right, you may change both the ratio of the absolute values of a and b (by screening or the choice of the approximate relative distance between the source and the cities) - as well as the relative phase (by more accurate adjustments to the distance).

The absolute normalization of the state psi doesn't matter. As long as at least one of the numbers a,b is nonzero, the vector itself is also nonzero and it can be multiplied by a number that makes its norm - length - equal to one which is the usual choice.

Aside from this overall normalization of (a,b) by a shared constant, it's clear that any choice of (a,b) leads to non-equivalent description. If one repeats the same experiment many times, he may measure both the absolute value of the a/b ratio, as well as its (relative) phase.

All quantum theories obey the postulates of quantum mechanics much like all ducks are wearing dog masks.

How do we know that the amplitudes have to be allowed to be complex? Well, a wave is connected with every particle. The wavelength is linked to the (inverse) momentum. However, cos(kx) which would be a real wave is not good enough because it doesn't distinguish "k" from "-k". We know the speed of the particle but we don't know whether it moves to the left or right. In a similar way, we wouldn't distinguish a positive and negative energy, and so on. Clearly, cos(kx) must be completed to exp(ikx) which does distinguish the signs.

Now, this information about the particle - given by (a,b) modulo a uniform scaling - is neither incomplete nor redundant. It is not redundant because different values of a/b (which is what is kept constant if you uniformly scale a,b) lead to different predictions of experiments. It is also not incomplete; if the particle contained some additional "hidden variables", one can show that they would typically destroy the interference pattern.

If you even wanted some "classical hidden variables" to mimic all the observable consequences that come out of the relative complex phase, you would find out that the measured correction will always satisfy the so-called Bell's inequalities. The correlations would be way too small and experiments show that the real world easily exceeds the mantinels imposed by Bell's inequalities. Quantum mechanics is able to violate and exceed Bell's inequalities, too. That's not surprising because the correlations predicted by quantum mechanics - and everything else - exactly agree with the observations.

The very physical relevance of the complex linear Hilbert space is what dooms all existing attempts to replace the postulates of quantum mechanics by something else. Those who dislike quantum mechanics like to think themselves as people who are ahead of time. However, it is very easy to see that they're the people who haven't yet understood the 20th century science; the world of physics is at least one century ahead of them. They just want to return to the distant past and "undo" some key discoveries. That's not possible in science.

In the future, the postulates of quantum mechanics may be phrased differently. They may be derived from a different starting point. They may be more tightly connected with the more detailed dynamical information about the Hamiltonian from our second layer. However, the complex numbers will never go away. The same is true about their relationships to the probabilities (via squaring).

In the 1920s, the complex numbers entered fundamental physics and they will never leave it.

It is not only the relative probability; it is also the relative phase of two microstates that has observable consequences. And it can be non-trivial i.e. non-real. These insights can obviously never go away again. Thinking that the complex amplitudes will disappear from physics is as naive as the idea that astronomy will return to epicycles and Elvis Presley will be found on the Moon.

People who think that physics will undo this key 20th revolution may present themselves as smart chaps and they may find journalists who do the same thing. In reality, however, they're as dumb as a doorknob.

Now, there are other postulates and universal rules of quantum mechanics. For example, the composite systems are described by tensor products of Hilbert spaces. It's not hard to see why: if the dimensions of Hilbert spaces H1, H2 are equal to d1, d2, there are clearly d1 basis vectors of H1 and d2 basis vectors of H2. These basic vectors parameterize some linearly independent (i.e. fully mutually exclusive) possibilities.

The set of linearly independent possibilities for the composite system obviously has to be the Cartesian product of the two sets for the separate subsystems. And the "linear envelope" of this Cartesian product - the new basis - is the tensor product of the original spaces. Its dimension - its number of basis vectors - is equal to d1.d2 as expected. This conclusion is pretty much inevitable, by basic logic. 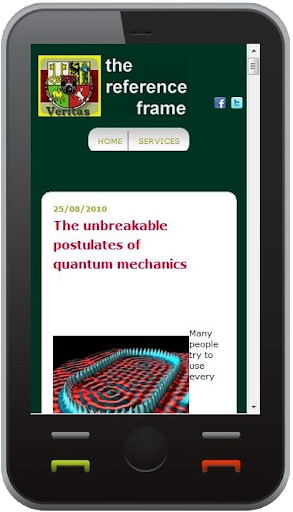 Technical comment: I have redirected all mobile traffic to onbile.com/lumidek (without a slash at the end), a new mobile miniversion of this blog. Apologies to all those who will dislike it.

Now, one may continue to question the universal principles of quantum mechanics. For example, probabilities are given by the squared absolute values of the complex amplitudes, e.g. by |a|^2. Is that necessary? You bet.

Experiments unequivocally confirm that the norm of the vectors - and the squared absolute values of the individual complex coordinates - are what determines the probabilities. Can you imagine that this "squared" relationship is deformed a little bit? You may imagine it but by pure thought, you may show that such a deformation is physically inconsistent.

Imagine that the probability that you measure "Boston" is not given by |a|^2 computed out of the relevant complex amplitude a; instead it is equal to something else, e.g. |a|^2 + |a|^4, which you may claim is compatible with experiments because the experiments have only measured the system for small values of a (it's not really true, but imagine that it may be).

However, it's clear that the operators evolving the system in time won't conserve

You may imagine that the "better" rules simply scale a,b by the right number so that the sum above is equal to 100 percent, after all. But such a rescaling will depend on all the amplitudes (or many other amplitudes). And you may see that if such rules are applied to the composite system, the predictions for one subsystem will inevitably be affected by the amplitudes for the other subsystem.

In other words, the non-quadratic formula for the probability will not respect the tensor structure of the Hilbert space. It means that you will lose locality; it becomes impossible to have two systems whose interaction goes to zero. Even two particles that are separated by billions of light years will influence one another by terms of order 100 percent. That's too bad because locality, and even approximate locality, becomes impossible.

In fact, such distorted rules of quantum mechanics would violate not only locality; they would also violate basic logic or causality. The rescaling of the probabilities would even be affected by amplitudes for outcomes that are already known not to have occurred. The more you deform the proper rules, the bigger the inconsistency becomes - but some inconsistency is always there whenever you deform the rules at least a little bit. So the predictions for your new measurement would depend on the ordering in which you "reduce the wave function". This fact would mean that it matters when the reduction takes place; it's a real process.

Consequently, the reduction needed to predict the right entangled outcomes would be a real process that takes place faster than light and violates relativity. If you look at such superluminal processes from another reference frame, they're equivalent to the traveling to the past which leads to the usual killed grandfather paradox.

In proper quantum mechanics, it's essential that the "reduction" of the wave function is not a real physical process and the wave function is not a real classical wave. It is just a tool that stores the information about the probabilities - something that we know about the system. Our knowledge about the whole system - including its distant portions - may change instantly (faster than light) and this "subjective change of our knowledge" doesn't violate any rules of relativity. It doesn't even matter when we "refresh" our knowledge about the expected future outcomes.

In similar ways, you could try to claim that various operators are not quite Hermitean. An unsophisticated version of this proposal would lead you to imagine that an operator associated with a real quantity - such as position - has non-real eigenvalues. That's too bad because by the other assumptions, only real values may be measured. The apparatus that measures the quantity can only show real answers - which is why the corresponding operator has to have real eigenvalues.

Nevertheless, even this "smarter" proposal is easily seen to be inconsistent. If the eigenvectors linked to different eigenvalues of the operator fail to be orthogonal to each other, it means that the two possible outcomes will fail to be mutually exclusive alternatives. It will no longer be true that


You may keep on trying but any attempt to abandon - or even slightly deform - the general postulates of quantum mechanics will quickly kill the self-consistency of your picture or its consistency with the basic logical structure of any hypothetical world that resembles the real one. And they will immediately highlight you as just another crank.

So the recommendation has to be repeated once again: don't mess up with the basic postulates of quantum mechanics.