Paola Capatano et al. shot this video on August 26th (it was released 2 days later) when the gadget was departing from CERN. One of the three U.S. Super Galaxy aircrafts returned from its Iraq and Afghanistan missions to help particle astrophysics, too.

A day later, the AMS-02 detector - or the Alpha Magnetic Spectrometer - was already waiting in the Kennedy Center for its ISS space mission in 2011. Space shuttle Endeavour will bring this gadget to the International Space Station in February.


Having cost $2 billion and being 7.5 tons and 5m x 4m x 3m in dimensions, the AMS-02 is among the most expensive and largest scientific gadgets ever sent to space.

It should be able to detect gamma rays, positrons, and antiprotons - and indirectly, it could also see dark matter particles (neutralinos?) via their collisions, measure the abundance of antihelium (which was not seen by the previous mission AMS-01 with a simplified detector that operated in space in 1998; AMS-02 is 1,000 times more sensitive), and decide about the existence of strangelets and other things.

AMS-02 is also expected to measure all kinds of cosmic rays and radiation in detail, with the safety of manned flights being a primary application.

Because Jewish readers are guaranteed to be overrepresented among the TRF readers, I wish you a Happy New Year. On Thursday, we will wake up into 1st of Tishrei, 13,730,005,771 of the seven-year-WMAP-Hebrew calendar. Your Motl the Operator. ;-)

For the non-Jewish readers: you probably don't want to learn the exact rules of this lunisolar calendar because their acceptability may depend on the higher average Jewish IQ. :-) Because the Jewish calendar wants to be synchronized both with the Sun and the Moon, you sometimes have to add a whole leap month (Adar I or Adar Aleph, a month to celebrate the cardinality of various infinite sets, followed by the regular Adar renamed as Adar II or Aleph Bet). ;-) 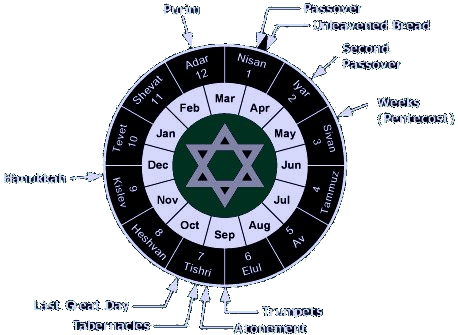 By the way, concerning a statement in the previous paragraph: 0.5% of visits come from Israel - which is 0.1% of the world's population. The ratio, the overrepresentation factor of 5, is surpassed by that of the U.S. - which is 11 (51% over 4.5%) - but you should realize that English is the first language in the U.S. but not Israel. And anyway, I estimate the overrepresentation factor of the Jews anywhere in the world to be at least 15, above the U.S. values (at least 2% / 0.15%).
Luboš Motl v 6:11 PM
Share