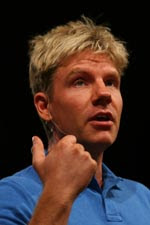 Bjørn Lomborg has labeled himself a skeptic when he wrote The Skeptical Environmentalist back in 2001.

Although he wouldn't say the same thing as the genuine skeptics among us (and the mailing list in which I am included wouldn't quite consider Lomborg "one of us"), his opinions were also far enough from the alarmist orthodoxy.

The fearmongers began to hate him - which was quite an achievement given their being progressive radicals and his being a left-wing gay. Well, some of them may be controlled by hormones and they may be driven up the wall as soon as they see the word "skeptic". ;-) In 2002, Scientific American has organized a gigantic witch hunt against Lomborg. It was described e.g. in Michael Crichton's speech Aliens Cause Global Warming.

It would also be remarkable to note that in 2004, Rajendra Pachauri has compared Bjørn Lomborg to Adolf Hitler. It would be remarkable if Pachauri were not mentally ill which makes such pronouncements rather unremarkable.

I have surely respected Lomborg as a rational economist and a heretic but I have still disagreed with many of his opinions. The second part of the previous sentence is going to be amplified in October 2010 when Lomborg publishes a new book, Smart Solutions to Climate Change: Comparing Costs and Benefits.

You may pre-order it now if you want a significant discount.

If you open the amazon.com link and look inside the book - and at the table of contents - you will see that as a rational economist, Lomborg remains sensible when it comes to "preferred methods" to "fight climate change". Some guest co-authors help him to reduce the insanity of the book. Carbon dioxide (and methane and black carbon) mitigation is largely overshadowed by climate engineering, forestry sequesteration, adaptation, technology-led climate policy, and technology transfer.

However, it's still remarkable that he wants to waste something like $100 billion for AGW a year. It's a lot of money but it's not too much money: it's clear that by the "stupid methods", one would have to pay trillions or tens of trillions of dollars a year to achieve a noticeable change of the climate after a century. And this crippling of the world economy is the actual main goal of the genuine AGW environmentalists.


With smarter methods (but those mentioned above are probably not smart enough), the costs may be much lower and they may even be in the vicinity of hundreds of billions of dollars a year. It's conceivable that if you find the cheapest way to manipulate the climate, you may see a measurable difference after a few decades and a few trillions of dollars that have been paid.

But the key question is: Why?

I do agree with some of the unhinged, far-left kibitzers in the media and in the blogosphere that Lomborg has noticeably changed his attitude to AGW. The very title and sketch of the book is very different e.g. from his 2008 book, Cool It. And I have no idea what has led him to do so.
Luboš Motl v 3:46 PM
Share