Many people think that if we switch to more energy-efficient light bulbs or TVs (e.g. LED lighting, LED TV, and so on) and other energy-efficient technologies, the total consumption will decrease.

This is preposterous, of course. Andrew Revkin has pointed out that one of the co-authors of a recent study, Harry Saunders, has just clarified their paper about this issue:


Why Energy Efficiency Does not Decrease Energy Consumption (Breakthrough Institute)


I would classify the Breakthrough Institute as a relatively sensible and technologically loaded organization that nevertheless promotes left-wing values and utopias.

The essential effect is that if some gadgets that consume energy become more efficient, the people also have to pay less for the energy, and they can afford more of it. Alternatively, they may also afford other activities that consume energy. Clearly, if the "average" or "aggregate" efficiency increases N times, the total amount of consumed energy will be greater than 1/N of the current energy consumption - because of the stimulated extra consumption.


However, Saunders says something stronger: the actual consumption may actually increase - and in fact, it is the likelier answer. There are many effects and characteristics of the places that consume energy that you have to appreciate.

Well, you may also imagine lots of activities near the "threshold" which are only activated when the efficiency becomes "good enough" - only at this point, they may become "profitable". Once they surpass this threshold, their abundance will explode, of course. For example, many people in the third world would find light bulbs a waste of money because the energy is expensive. If the efficiency increases above - or energy prices drop below - a certain threshold, you may suddenly see whole nations that start to do certain things that depend on energy.

Obviously, all this evolution is good for the living standards.

It's not good for those who think that the energy production itself is a problem. These arguments about the "rebound effect" - that may be counter-intuitive for some people but that are actually the economic incarnation of common sense - show that it makes no sense for them to promote energy efficiency.

All these arguments are nice and people will probably agree about them at some moment. However, what Saunders et al. don't discuss is an actual intent of those who want to force the world to consume less energy. What is it?

The increase of the energy price may be realized as an extra tax - that the promoters of the "forced reductions of consumption" will simply insert into their pockets and use for whatever they consider "proper" - usually for throwing it into the lavatory, as I will argue later. As the energy efficiency will keep on increasing, they will use the argument above to steal an ever greater portion of our money. This is the actual threat we are facing.

How does it differ from the situation in which the energy taxes are not increasing - and in which we have argued that the aggregate energy consumption will go up? The difference is simple. In the "free market" situation, the energy price won't go up, and the money that is saved by the increased efficiency will be spent by the actual people, according to their desires. Their spending will be different than the spending chosen by the self-appointed "saviors of the world" who believe that they have the right to steal any amount of money from you in order to "save the planet". In particular, the "real people" will spend the money for lots of things that require energy, too.

So the difference boils down to the question whether the people themselves - or self-appointed bureaucrats - decide what is good for the people and how the money should be spent. Needless to say, if it is the bureaucrats who decide, they will always be willing to waste your money for an arbitrarily absurd project. They will build solar power plants and wind turbines under the ground just in order to make the energy even more expensive. They don't care whether their decisions make any economic sense.

This has consequences. If someone else decides what to do with an increasingly large portion of your money, then you rightfully feel that you are actually not earning the money. The money that you "really earn" is the money that you can spend - whose fate you can decide about. Such a reduction of the correlation between people's desires and their work leads to a reduced will for them to work. Many more of them will depend on the welfare program, and so on. A typical socialist vicious circle.

If you imagined a hypothetical world where the CO2 production causes problems - it's not our world - the right approach would be to quantify how much "harm" a ton of CO2 makes (instead of insanely trying to plan the macroscopic future of mankind and the total emissions in the year 2100), and just ask the CO2 producers to pay this amount - essentially a fixed number of dollars per ton, and allow them and their emissions to do whatever they will do given this fair contract. The money collected "for the harm" in this way would be used to "fight against the problem" or, more reasonably, to help the "victims" (Nature or humans) to adapt.

So whatever your price per ton of CO2 will be, it will become easier for the people and companies to pay it as the efficiency goes up. In any system that works "fairly", it will still be true that the increases of energy efficiency will lead to increases in energy consumption. That's called the human progress - and the progress is the actual problem that the environmentalists dislike. 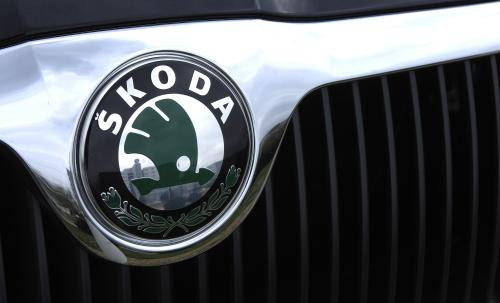 Today in Paris, Škoda introduced its new electric car based on Škoda Octavia Combi - which has enough space for the heavy, 315-kilogram batteries that may swallow 26.5 kWh. It takes 8 hours to charge it from 230 V grid and 4 hours from a 400 V grid. Once you charge, you may drive for 140 km by speeds up to 135 kph. From 0 to 100 kph, it takes 12 seconds to accelerate.

The car will only be produced once it's ready from all viewpoints - in 3-4 years. Škoda E Greenline abandons most of the features introduced with Škoda Henlein such as the gas chamber. ;-)

Because this article was about efficiency, Škoda has also shown the 2nd generation of its efficient, "Greenline" Superb and Yeti vehicles.
Luboš Motl v 11:14 AM
Share