Their reason for excitement comes from events that produce roughly 90 charged particles or more.

You will see something new if you focus on the rapidity differences "delta eta" that are greater than two - going up to five. In particular, if the intermediate transverse momentum is between 1 and 3 GeV, the near-side ("delta phi" near zero or pi) associated yield begins to dramatically grow with the multiplicity and the rapidity difference, producing a long-range ridge-like structure. 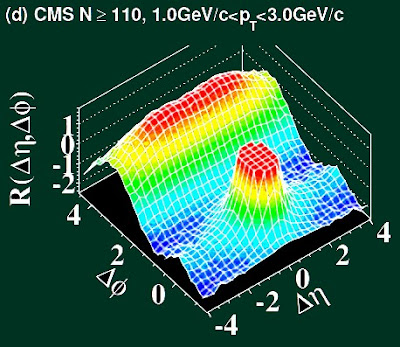 This behavior kind of confirms some results of heavy ion experiments and contradicts the simulations where the associated yield should be independent both of the multiplicity and the intermediate transverse momentum.

Imagine: the models would predict a flat function, and instead, for the right interval of the intermediate energies and the multiplicities, the collisions produce a structure that may become as striking as the most extreme correlation function from the image above.

If you buy this paragraph of mine, what is the "something"?

Well, it surely looks like an extended object of some kind, a stick, a string, a magnet, a rigid rod, or, which is most likely to be chosen by conventional QCD experts, a "longitudinally extended cylindrical volume of quark-gluon plasma" - feel free to choose something. ;-)

Of course, I would conservatively choose a dual string - or a flux tube - with quarks at the endpoints. Its length is a few fermi, it wants to be really straight as it is stretched, and when it is forced to break, it creates many smaller charged strings that move in the same or opposite direction because the momentum is nearly democratically distributed among the string bits. Because of the negative pressure along the string, the string may also break into oppositely moving pieces.

I am a bit puzzled why this "normal" stringy behavior is not included in the simulations they're comparing the experiment with (although I realize it's very hard from a weakly coupled field theory perspective) - but needless to say, I have no detailed knowledge of GEANT4 whatsoever. At any rate, the most straightforward preliminary conclusion I would offer is that they are seeing some stringy features of ordinary QCD rather than "new particles".

So this has nothing to do with the Higgs or SUSY - it is at a lower-than-expected energy scale, too. But it seems to go beyond the old accelerators tests of QCD. The Tevatron didn't have enough energy to produce hundreds of 3 GeV charged particles so it couldn't have seen this effect in the range of "N" where it begins to grow. But exactly because the object producing the correlations is extended, you don't need to localize things so well and the effect may be accessible to "dirty" heavy ion experiments as well.
Luboš Motl v 8:26 PM
Share