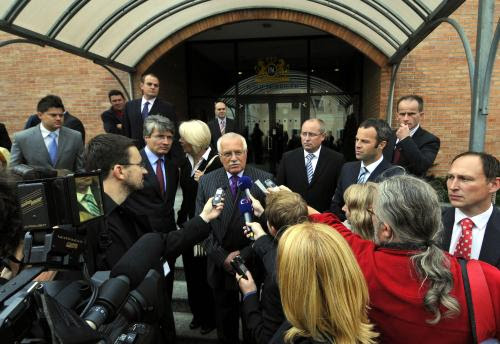 Today, Czech president Václav Klaus - who is as staunch a nonsmoker as your humble correspondent - went to the old, royal, Eastern Central Bohemian town of Kutná Hora (which is also famous for a church, silver mining, and its historical and modern coins). He took the scissors and inaugurated a new part of the factory that will allow the production to be increased from 30 billion to 40 billion cigarettes a year.

He wished success to the company which has become one of the flawless example of the Czechoslovak privatization from the early 1990s.


Of course, Philip Morris "himself" publicly supports the sequences of bans and other methods to suppress their industry - it's all about the image. On the other hand, Václav Klaus doesn't have to do such things. So he emphasized that the EU officials are ludicrous if they want to fight against smoking by bans. (Imagine smoker Obama or any other modern Western politician boasting the same balls!)

We remember where bans have led: smuggling and home production of products of much lower quality.

Needless to say, I mostly agree with him. The ultimate reason why people smoke is that they like it: they instinctively, semi-rationally evaluate the utility of the cigarettes and it's apparently positive for them, even when they take the possible extra health problems (everyone knows about them by now!) and the spent money into account.

Yes, some people display a very short-term thinking when they "can't resist a cigarette". But it's still their decision to focus on the short time scale. And they usually have legitimate reasons why they prefer the short-term values over the long-term values. Moreover, I unfortunately know people for whom a total smoking ban would steal one of the last pleasures of their life...

Is smoking a kind of addiction? Well, yes, you may call it this way. But it's just a negative way of expressing a fact that may also be phrased in a positive way. The people try tobacco and they suddenly can't understand how they could have lived without it!

We usually don't say that we're addicted to water, sugars, proteins, or fats. Some people may even be addicted to vitamins or clean air, too. ;-) They're nutrients and other things that our organisms often consider beneficial. It may sound "dirty" but cigarettes play the same role for the smokers although the benefits are largely psychological.

As I said, you don't have to convince me that tobacco sucks but I still think that I understand the smokers' thinking.

Fighting against deficits in the EU

The European Union has also presented its new idea how to fight deficits: those who violate the rules will pay 0.2% of their GDP. Now, this is quite a weapon!

It makes me laugh out loud, especially when I read about the proposed contrived and arbitrary rules what to do with the interests from those 0.2% of the GDP. If your country suffers from deficits but behaves nicely for some time, according to some complicated detailed rules, it may save something like 1% of 0.2% of the GDP. Saving as much as 0.002% of the GDP is surely going to create a paradise on Earth. ;-)

0.002% of the GDP may be around $5 million for a medium country and it's approximately enough to pay the lawyers to learn what the rules about those 0.002% are, and to represent the country - without a guaranteed success. ;-)

But even the overall figure of 0.2% - which a country pays if it "ultimately fails" to obey the fiscal rules - is completely negligible. A typical country that violates the budget rules has a budget deficit equal to something like 10% of their GDP. Well, that's neat, so they will pay the fine and increase the deficit to 10.2% of the GDP. Big deal.

Moreover, the money that is collected from these fines is mostly going to return to these countries, anyway - once their economies are being saved by the European Union, these funds will be helpful and used. The saving procedure will come earlier because the 0.2% fine makes the financial situation of the country somewhat worse - and the existence of the fines in the history will make the help by the EU a more visible "ethical urgency" because the EU with its fines will have participated in escalating the country's problems. Meanwhile, this meaningless shell game will feed dozens or hundreds of useless EU bureaucrats who will claim that they're convinced that they're saving the world by moving the money back and forth (with some friction that deposits financial heat to their pockets).

This mechanism of 0.2% fines is similar to a parent who wants his or her son to stop stealing chocolates from the supermarket. So he punishes the son by telling him that instead of 500 chocolates, the son has to steal 501 chocolates (extra work) and give one of them to the parent. :-) Of course, the parent is an ethical person, so he or she won't eat the stolen chocolate. Instead, he or she will save it and give it to the son soon after he is caught by the police, when he already misses the taste of chocolate.

Again, the fiscal responsibility has nothing to do with some preposterous homeopathic fines and meaningless punishments. Much like in the case of smoking, it boils down to a semi-rational decision of the nations who see the advantages of spending too much (borrowed) money and who also see that the disadvantages of the debt are tolerable, to say the least, because someone is going to save them, anyway. They are obliged to, the people believe. Ask almost any Greek on the street (at least a year ago). If these key factors that determine the politicians' and voters' costs-and-benefits analysis and their subsequent behavior don't change, their behavior will also remain unlikely to change.

Apologies if I reveal an inconvenient truth but the fiscal responsibility arises and must arise from the fear that the problems caused by too much debt will make someone's life much worse than the current life - even the current life when no money is borrowed. If there's no fear of such a negative change, there's no responsibility. After all, that's true about most other kinds of responsibility, too. And be sure that there's no reason to be scared by some 0.2% of a number that is added to some abstract paperwork that affects no one. At least, the Greek pensioners are rational enough to (correctly) determine that there's no reason to be afraid of such things in the present arrangement.
Luboš Motl v 9:03 PM
Share