Red Redemption: Fate of the world 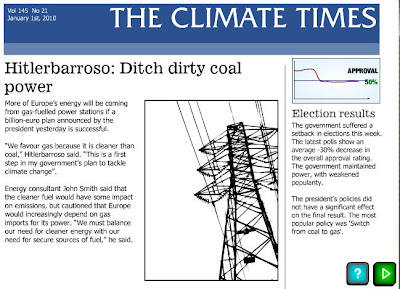 In the game, you were a "European president" who had to suppress the whole European population as Hitler and Stalin combined with the goal of reducing the CO2 emissions, screwing the people, bribe politicians from other continents, and keeping yourself in power (play now the monstrosity directly at the BBC website).

Of course, these folks haven't been arrested so they continued to "work". At the end of October 2010, they will release a game that is more ambitious,


In the new game, you are no longer just a European dictator which was way too modest a job.

Now you are chosen the global dictator - the head of the G.E.O. junta - who is hired immediately when the 2010 climate talks fail (see the trailer) and whose task is do everything to reduce the emissions of CO2 in the world. Here are some of your basic options; they became much more "juicy" relatively to the bureaucratic elimination of power plants etc. in the 2006 game:

On each continent, you can introduce "mandatory euthanasia" for $100 billion - a policy to kill all the old and ill people. Or you can pay the same money to develop special bio-weapons to predictably exterminate whole nations. For the same payment, you may also induce a regime change just to overthrow politicians who are climate skeptics or who are otherwise hostile to your world government and replace them with "biddable", corrupt politicians of your choice.

So this is what they plan if the 2010 climate talks will fail, and be sure that they will? Even if the creators of the game don't intend it, it's clear that some groups will worship the game as a computer model whose lessons justify "action". After all, the likes of the IPCC are already taking much less realistic computer games seriously today.


Let me admit that I really think that the people who will be earning money by promoting these recipes for the future should be quickly and preemptively arrested if not executed for planned crimes against humanity. This topic is no material for jokes in a world where you can find actual unhinged lunatics, and some of them are very powerful (e.g. the U.S. "Science Czar", Mr Holdren), who indeed want to introduce inhuman and anti-market measures in order to "regulate carbon dioxide".

You may say: this is just a game. You don't want to arrest or execute someone who just wrote a video game, do you? Well, Mein Kampf was also "just a book". For a while, before it became clear that it wasn't just a book: it was a detailed plan to bring a decade of genocide (originally planned as a millennium) to the whole European continent - and beyond. As long as there exists a credible threat that some people will try to actually realize these insane things with carbon regulation in the future, we should better view games and books with details about such a hypothetical future to be parts of the planning process for the genocide, and the courts should deal with the perpetrators accordingly. You may call it the precautionary principle.

By the way, if you're worried that mandatory euthanasia, bioweapons to exterminate continents, or liquidation of democratic politicians are your only options in the game, you shouldn't worry so much.

You may also initiate a global nuclear war. This climatic option also reflects a reality: Rutgers professor Alan Robock just explained his friend and comrade Fidel Castro what are the climatic impacts of a nuclear war. Sweet.

On a positive note, there are a few positive decisions you may do in the game, too. For example, you may "sponsor denial lobby" - but only $50 billion, instead of $100 billion for the recommended "projects" above. And you may also build nuclear power plants - but you will become hated if you do so. As you can see, genocide is the only option you can take.

Don't expect the punishment for the disgusting jerks anytime soon. In August 2010, Nature published a positive review about this game promoting several methods of global genocide. It's a "platform for learning about science" and "serious fun," we learn.

Huh!? What is so scientific about clicking at a button to kill millions or billions of people? People used to be good at these things long before they began to study science. Maybe they were not as good in genocide as climate alarmists, but it's still true that there is absolutely no science in genocide or in the global warming fearmongering.

The Telegraph joined those who promote the new game. According to the conservative newspapers, it's an "interesting idea" to solve the climate crisis by designing a virus that kills millions.