The book will be out on September 7th - in five days. A creator is unnecessary because the Universe has inevitably come into existence because of M-theory, i.e. the full laws of quantum gravity. "M-theory is the unified theory Einstein was hoping to find," he correctly explains.


See also: Churches hit back at the heretic for an analysis whether Hawking is right.


At the amazon.com page of the book, the authors sketch the content of the book. The book will defend the multiverse and present the recent results on the theoretical and experimental front - especially string/M-theory and the observations of COBE and WMAP. They "assess M-Theory, an explanation of the laws governing the multiverse, and the only viable candidate for a complete 'theory of everything'."


So don't expect any politically correct bullshitting about random crackpots' delusions being as viable as M-theory. ;-)

For Stephen Hawking, the elimination of God from the laws of physics seems to be an unusually high "research goal". And while I don't quantitatively understand what this goal could exactly mean, I kind of understand him. He has been given quite some circumstantial evidence that no good God is in control of this particular Universe or multiverse.

Pre-order the book via the amazon.com link at the top if you care and if you want a guaranteed 40% discount. 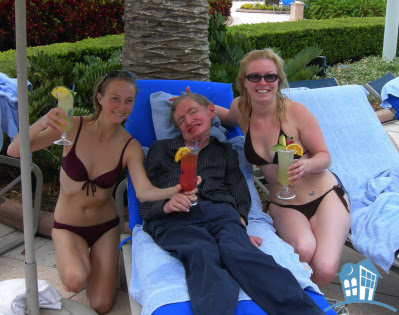 Where is Boyle's beef?

Alan Boyle (MSNBC) and others are very skeptical about the "beef" of the claim that something has to arise from nothing according to the laws of physics. I largely disagree with Alan Boyle.

First of all, many people are confused by the range of validity of mass or energy conservation. They think that it's not possible to violate this law. However, in Why and how energy is not conserved in cosmology, I have explained that the energy conservation only holds if the laws of physics - and the appropriate background - is time-translationally invariant which is not true, in any useful sense, in cosmology.

So the intuition that "something cannot arise from nothing" is flawed as soon as one takes the insights of general relativity into account. However, science can actually go further than that. In principle, it can also study whether some space or matter is actually created and how it looks like.

The laymen - including some atheists - have the tendency to think that such questions eternally belong to God and religions and they're not accessible to science. However, this opinion is incorrect according to state-of-the-art theoretical physics. Science can discuss the very beginning of the existence.

It's a very different question whether we completely understand these issues - we don't - but I think it's fair to say that we understand enough to know that such questions are likely to follow some laws that are accessible to the scientific research.

Already with our incomplete understanding as of 2010, we can say many things. Inflation can explain why the Universe is flat, large, and much heavier than the Planck mass (order 1 in fundamental units) but it doesn't quite get to the "Planck time" away from the ultimate birth. However, we also have candidate laws - such as the Hartle-Hawking wave function - that can determine the initial conditions as well.

So Hawking's statements are not really willy-nilly today - and the book will surely try to substantiate the "big claims" about God in some technical detail.
Luboš Motl v 9:31 AM
Share