The scientific consensus has convinced our world government - the officials of the United Nations - that one of the most urgent tasks for the humanity is to optimize our communication with the extraterrestrial aliens and the E.T. diplomacy.

Because their arrival is imminent, they may be confused whom they should call if they want to talk to the Earth's humans - much like the U.S. president is confused whom he should talk to if he wants to talk to Europe.

While the situation in Europe is remaining confusing and the holy mission of the "nice" people to create a unified dictatorship on the Old Continent hasn't yet succeeded, the United Nations have apparently made much more progress.

The woman who has already worked as the Director of the United Nations Office for Outer Space Affairs (UNOOSA) in Vienna - but this office wasn't yet "good enough" - is Ms Mazlan Othman, Malaysian girl who dreamed about becoming a physician. But after 100+ years of the existence of a school, she was given the first female physics PhD in Otago, whatever the place is, once the female reproductive organs became popular and worth rewarding over there. This achievement of hers, which unfortunately remained completely unmatched by her publication record, made her qualified to be employed in the modest job of the mankind's ambassador to the rest of the Universe; she will unfortunately not be sent to her new target country yet. ;-)

See Google News and The Telegraph that began with the story.


Well, this is how the consensus science works. The number of intelligent extraterrestrial civilizations is unknown - it lies anywhere between 0 and infinitely many. But the probability that the extraterrestrial aliens begin to communicate with us is tiny and the probability that such a communication will be relevant for us physically - that they will visit us - is basically zero.

The probabilities are reduced by additional 8 orders of magnitude if you restrict the hypothetical events to Ms Othman's lifetime. But even if they visited us or began to communicate us, the probability that they will be interested in an irrelevant U.N. envoy - a person without any special skills, knowledge, power, or scientifically interesting features, chosen according to politically correct criteria - is about 10 orders of magnitude smaller than the probabilities that were sketched previously.

Imagine: they would have to learn that there exists a dumb self-important organization that apparently wants to control the local planet (but it's not the only one that does). And because of some bizarre historical glitches, this organization worships bad scientists of color who have a vagina and who resemble one, too. This is already a lot of learning of cultural baggage for an E.T. visitor. Even if the aliens learned all this historical stuff and the details of the most decadent - transient and constantly mutating - fads of the early 21st century, about 13,730,002,010 years after the Big Bang, why should they care?

Do you really think that the aliens, once they contact or visit us, will buy the political correctness? Why should they? After some time, they will even be able to see that only some intellectually inferior inhabitants of this planet do so. So why they should care about the PC believers more than they care about e.g. the insects? Idiots who have been brainwashed for years and who have been brought up to be unable to independently think may buy the PC and the U.N. bureaucrats; but be sure that most extraterrestrial aliens won't belong to this group. You know, they would be as independent of us as you can get.

Moreover, to communicate with them will be a very hard task and the probability that Ms Othman will significantly contribute to this difficult task is less than 10^{-10}, the inverse population of the Earth, because she's below the average person on Earth in such information technology and mathematical affairs. 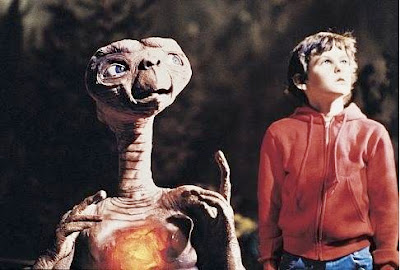 Even the E.T. is showing a finger to the U.N., and believe me, he is just a fictitious figure.

In other words, whoever is behind these policies has some problem inside her skull - or his skull, for that matter.

But at any rate, as Sean Carroll explained, the proper journalists are obliged to report on the consensus of the world's scientists, represented by the institutions of the holy United Nations, mention nothing whatsoever about these people's being complete nutcases, suppress all the doubts that they could personally have, and work hard to make sure that all their readers will accept the scientific consensus, too.

Imagine how many millions will be swallowed just by Ms Othman's meaningless institute of the U.N. And this is just a random tip of an iceberg. The U.N. are literally built upon similar stuff - tons of deluded freeloaders who lack a basic common sense and contact with the reality.

One of the 60 most important departments of Ms Othman's agency will be the Department of the Communication With Extraterrestrial Aliens Who Are Our Ancestors. The video above (cargo cult begins at 4:49) captures a couple of Ms Othman's colleagues who were given jobs in the U.N. Each of them will be given a skyscraper in Manhattan.

Note that already before they've gotten their new job, they knew that it was the white men who stole the airplanes from their black ancestors. And they hope that it will be the green men, contacted by the red men, who will return the wealth to the black men.

Some sources say that she denies the new job that she should have announced on a Royal Society conference. I, for one, need some evidence to believe that the Telegraph article was a complete mistake or fabrication.

Even if she won't be named, it's still plausible that the U.N. have planned it but they have realized that the reaction would resemble this blog entry. Such a hypothesis is extremely natural given other crazy things that the U.N. is doing.

More likely, the Telegraph writer has learned about the United Nations Office for Outer Space Affairs (UNOOSA) where Othman is current a director, was shocked, and "overinterpreted" the mission of this agency. I wouldn't be surprised if she were shocked. After all, this agency promotes "peaceful uses of outer space".

You may ask what are its relationships to NASA, ESA, and [RUSA]. Clearly, these agencies "de facto" possess most of the accessible outer space, and if they have to be careful about something, it's the other two agencies. How does a U.N. agency fit into this? Do they expect that NASA will call a Malaysian astrophysicist to get a permission for every operation - or just every other operation? ;-)

This is just way too silly. The ambassador who talks to the aliens is silly at the science-fiction level but the existing UNOOSA is already bad enough. It's a bureaucratic group that can't possibly play any positive role in the actions that actually matter for the human activities in the outer space. So even if Heidi Blake overinterpreted the purpose of UNOOSA, she didn't convey a fundamentally misleading message. Her message is:

There can be no doubts that some space-related offices of the U.N. are utterly bizarre.
Luboš Motl v 2:10 PM
Share