Andrew Revkin wrote about his exchanges with Hal Lewis:

However, for Andrew Revkin, the fact that someone can learn something new in 20 years is a shocking news. I will discuss this point later.


Revkin has also asked a few well-defined, elementary questions to Lewis. And Lewis gave him sensible answers. Finally, Revkin invites a distinguished guest blogger who supplements Revkin's complaints about the "man-made science change" which he clearly equates with "global science disruption" (because science shouldn't change, should it, Andy?) with a hateful rant.

But the remarkable student clearly has to study something different. You don't need to guess twice what this novel discipline means: it's a far-left, neo-Luddite ideological movement that just tries to claim that pretty much all technology is risky. Those people know - and are expected know - nothing about the actual technologies, or anything about the real world, for that matter. Nevertheless, a self-evident idiot is found appropriate by Andrew Revkin to teach a veteran nuclear physicist about technology, technological risk, and the climate science.

Are you serious, Andy? Can't you really see that Mr or Ms David Ropeik's brain is just a pile of worthless trash?

I have also left a special comment about my and our evolving knowledge about the climate change at his blog:


Dear Andrew, what a shock that physicists may sometimes learn something new - e.g. that they were previously wrong. Do you assume that physics follows the same principles as Catholic Orthodoxy?

Twenty years ago, I didn't know almost anything about the greenhouse effect and whether it could be dangerous, either. It was right after the fall of communism. The Czechoslovak newspapers would actually like to write about similar soft sciences. Paradoxically enough, the topic is no longer hot today. No mainstream newspaper in the Czech Republic would write about global warming on a daily or weekly basis these days, except in a negative way.

I have had never too much respect for environmentalism (and even for ecology) and the articles about these issues were too soft when it came to their exactness - and I was just annoyed that they didn't dedicate way too much time to more serious portions of science such as particle physics. But I also assumed that the things had to be potentially dangerous if they say so. It's my guess that a vast majority of people starts with this expectation. Many people are talking about it - so this has to be based on some serious data, right?

At that time, I had no idea about the many mechanisms that are essential for the changes of the atmosphere and about hundreds of graphs that I can draw today. So I was imagining that "global warming" simply meant that the temperature was pretty much a linear increasing function of time. So of course, one can calculate when it may start to hurt. It was my understanding that the people simply had to make these calculations sensible and honestly, so if they said that the warming could be a problem within a century, it was likely to be right. I didn't find these considerations too interesting but I thought they were true. They didn't sound impressive enough for me to spend the time and check them in detail - something I only started to do around 2002. 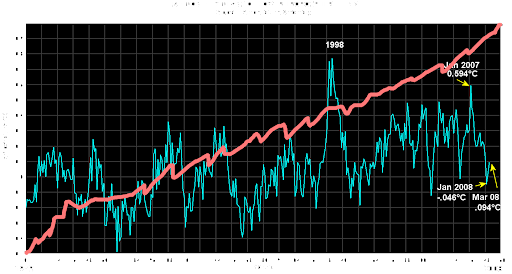 The red line shows how I approximately imagined the global mean temperature graph according to many newspaper reports about global warming I read around 1990: none of them bothered to include the actual graph. How else should have I imagined a global warming by something like 5 °C per century? The UAH graph is added for comparison. Can you spot the difference between the trends and the noise levels? Click to zoom in.

Obviously, the actual graphs don't show anything of the sort, anything similar to a linear function, as I learned soon. They can be described as a trend-less pink noise. But even if you imagine that there's also a trend, and even if you imagine that it's fully caused by CO2, the best rough estimate for the climate sensitivity suggests that there can't be any visible problem at least for a century or two - simply because the change won't be too different from what it was in the 20th century in which the temperature change's impact was pretty much zero.

After many years of research into these issues, it became spectacularly clear to me that there isn't any climate threat, at least not one that would be worth the attention of non-specialists, because of many reasons. I learned that the dangerous climate change was a superstition, much like geopathogenic zones and hundreds of other superstitions that are bought and spread by many people who didn't bother to verify them or who have a reason to spread them even if they know that they're wrong.

Well, does it mean that I was silly at some time? In some sense, it does. More precisely, I was ignorant about a portion of knowledge. I knew almost nothing about a discipline of physical sciences. Dr Lewis was similarly ignorant - at some point in the past - and pretty much anyone else was ignorant as well. People are not born as omniscient creatures, whether or not it sounds surprising to Andrew Revkin.

Hal Lewis is not the only person who has relatively recently learned that the panic about climate change is scientifically unjustifiable. For a dozen of other recent random examples, see e.g.

In a few years, pretty much everyone will know that this panic will have been total nonsense. This is what the process of learning means in this particular case. The more people know, the more they realize that the panic was based on delusions, fantasies, deliberate distortions, logical and methodological missteps by researchers who are not up to their job or who have reasons to cheat, irrational feelings of guilt, groupthink, sensationalism of the media, politicians' desire to look like saviors, and general superstitions.

The best thing each person can do is to make sure that he won't be among the very last people who manage to figure this elementary fact out. I began to study these matters around 2002 because the emerging prevailing opinion stated that climate change was an important physical phenomenon. So it was my duty to look into it from the scientific perspective. While most of the climate change science remains largely unpredictable, the evaluation of the "extraordinary statements" about a threat led to clear answers: there's no threat. I think it is a duty of many other people to independently look into these matters, too. It's clear that most scientists haven't yet done so which is why so many of them - and so many ordinary people - just keep on parroting superstitions and misconceptions from others.

[I have edited and expanded the comment for the TRF purposes.]