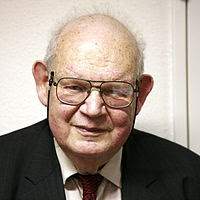 Benoît Mandelbrot was born in Poland on November 20, 1924, into a highly educated Jewish-Lithuanian family. They moved to France in 1936. He studied, was fixing tools, and tended horses there but acquired the dual French-U.S. citizenship after some years.

Mandelbrot died of pancreatic cancer in a hospice on Thursday, October 14th, 2010. It was in a town where I have lived for 6 years - Cambridge, Massachusetts.


Mandelbrot, a maverick who didn't worship the Academic establishment and who would usually talk about different topics than others and apply mathematics to seemingly hostile contexts, has also written things about economics (see the book that will be re-published in two weeks!), information theory, and fluid dynamics. But as a mathematician, he is famous for fractals, their self-similarity, their fractional dimensions, their relevance for imitating "roughness" in Nature, and related issues.

Mandelbrot had to be a pretty special thinker because according to an unhinged climate crusader, Mandelbrot was the 2nd most arrogant person in the world after your humble correspondent. ;-)

If you want to know where his soul went after he died, this question can be answered pretty accurately. It is a point in the Mandelbrot set which is approximately here:

Music by Don Garbutt, 1988. To speed up the calculation of the snapshots, the authors of the video used the newest steam-powered computer originally designed in 1837. Around 9:50, the video above shows that the complex plane becomes three-dimensional at very short scales, full of stones that resemble the Heaven - but they're actually mandelboxes.

Via Sarah Kavassalis who quotes Mandelbrot as he calculated the dimension of his world line from the birth to the cancer - it is greater than one; who recommends his TED talk on roughness and fractals; and who chose a well-written tribute in the New York Times.
Luboš Motl v 8:13 PM
Share