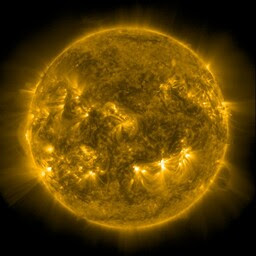 Gavin Schmidt, BBC, and many others discuss an interesting paper about the Sun's role in our climate published in Nature,


and written by Joanna D. Haigh, Ann R. Winning, Ralf Toumi, and Jerald W. Harder (UK, US). The authors focus on an important subtlety - the spectral dependence of the solar variations.


The number of sunspots oscillates with a period of 11 years or so, in average. However, the overall number in the 11-year cycle is modulated by slower cycles (or aperiodic processes), too. For example, there were almost no sunspots during the Maunder minimum (1645-1715).

Traditionally, people also looked at the total irradiance - the total energy in Watts per square meter that we're receiving from the Sun. And this total irradiance only changes by 0.1% between the solar minima and maxima - and should change the absolute temperature by 0.025% or so i.e. by 0.07 °C only. That's not enough to explain the bulk of the observed centennial changes of the temperature. However, this solar energy comes in many colors - literally. The photons have diverse frequencies - some of them belong to the visible interval; others are infrared; yet another group is ultraviolet; and some higher and lower frequencies are included, too. 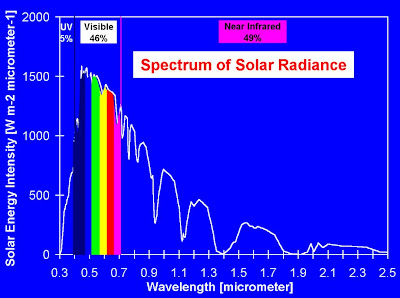 The photons of different colors influence the Earth's atmosphere differently - even the signs may differ. And the numbers of photons at different frequencies are differently altered by the solar cycles and variations.

In particular, the new paper above has noticed that the ultraviolet radiation from the Sun has decreased approximately 5 times more rapidly (5 times higher a percentage) in the period 2004-2007 (when the solar activity was decreasing towards the recent minimum) than the total irradiation. Because of the ultraviolet photons' impact on the ozone layer, this could have led to some cooling (after some steps described in the paper).

So the authors analyze this possible impact in various ways.

Some of the media coverage is atrocious. For example, Richard Black of BBC includes the following religious paragraph:


But, they add, the research does not challenge the role of humanity's production of greenhouse gases as the dominant long-term driver of modern-day climate change.


If you simply check the new paper, you will see that this is a flagrant distortion of the truth. The paper has nothing whatsoever to do with greenhouse gases. For example, no reference to this junk appears anywhere in the long abstract. More precisely, the paper assumes that the effect of all CO2 on those changes is exactly zero. The paper attributes all the observed variability to the Sun and wants to know the details about this Sun's influence.

To implicitly say that the paper supports the notion of a man-made global warming is just a lie and Mr Black should be given a proper thrashing for that. It's plausible that the authors said such a thing "outside the paper", but it shouldn't be reported, especially because Mr Black has manifestly achieved this distorted "answer" by blackmailing the authors with a red button.

Feel no pressure, authors. "But tell me that the AGW deities are as great as they have always been." We know the greens' tricks and we can't be fooled even if the green is called black.

Although it has nothing to do with the questions studied by the paper, you may still believe that there are additional effects that have influenced, do influence, and will influence the changing temperature. And there surely are. However, if you want to believe that the most important extra components are man-made ones, the new paper will quickly drive you into a lot of extra problems.

If you look at the historical sunspot graphs, you will see that the number of sunspots has significantly increased between 1663 and 1762. I chose this particular century because the Central England dataset shows that the warming trend in that century, obtained by linear regression, was +0.86 °C per century of warming (the highest trend outside the 20th century I can find), pretty much tied with the 1909-2008 century.

This warming has generally been assumed to have something to do with the Sun. Now imagine, for the sake of the argument, that the Sun - whose activity was increasing during the 1663-1762 period - has actually contributed some cooling, for example by 1 °C, during the 100-year period. If that is true, then some other effects had to be responsible for +1.86 °C of warming, to cancel the cooling effect of the Sun, and to add the +extra 0.86 °C of warming observed in Central England.

And these other effects were almost certainly natural in origin. Note that James Watts sold the first steam engines in 1776 which came more than a decade after the century we studied.

So in our scenario, effects different both from CO2 and from the solar activity had to warm the Earth (or Central England) up by +1.86 °C per century - which is three times the warming we have observed during the 20th century. Clearly, if that's the case, the man-made warming caused by the recent level of industrial activity is even more negligible than previously thought, relatively to these extra natural effects even when you integrate it over a century.

I don't personally believe the new paper's claim that a higher solar activity leads to a cooling on Earth. However, I do think that any "excellent" paper about the solar influence on the Earth's climate that will be published in the future should try to take the spectral dependence of the variations into account.