Was September 2010 the warmest September on the modern instrumental record? As Steve Milloy's table quickly reveals, it depends whom you ask: different teams offer strikingly divergent answers to this simple question.

While our skeptical soulmates, John Christy and Roy Spencer, at UAH AMSU answer "Yes, September 2010 was our warmest September", and their satellite colleagues at RSS AMSU say the same thing, the crusaders responsible for the global surface records say something entirely different.


The data at NASA's GISS, led by James Hansen et al., indicate that September 2010 was the 4th warmest September, after 2005, 2009, and 2003 (recall that GISS doesn't agree that 1998 was the warmest year). However, the HadCRUT3 team of Hansen's fellow believer, Phil Jones, is "paradoxically" even more radical.

According to the HadCRUT3 dataset, September 2010 was the 11th warmest September because its anomaly was just 0.391 °C. The last month wasn't even in the top ten (among Septembers)! The noticeable difference between the ranking 1 and ranking 11 should make you sure that there's not much useful yet reliable information in similar temperature pissing contests.

By the way, the previous sentence also means that the warming attributed to 15 years of the enhanced CO2 greenhouse effect is negligible and basically unmeasurable by our thermometers - and be sure that the ecosystems' ability to measure things is worse than the ability of our high-tech gadgets.. Even if you happened to think that "action" is needed, a 15-year delay makes no difference. 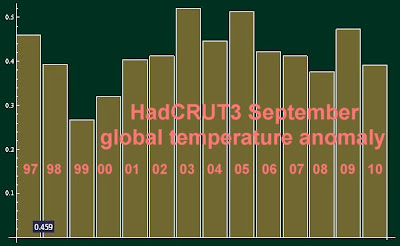 September HadCRUT3 global anomalies between 1997 and 2010.

Meanwhile, the La Nina anomaly weakened back from -1.8 °C to -1.5 °C in the latest weekly reading. After some spotless days I've noticed just weeks ago, the Sun is getting very alive as it plans its Solar Cycle 24. The current SSN sunspot number is 61.
Luboš Motl v 6:33 PM
Share