Harvard: our elixir of youth for stem cells was bogus

There have been various examples of (alleged) scientific misconduct - e.g. "Copygate" affecting Mr Wegman. I find this one interesting.

In January 2010, the Harvard Stem Cell Institute (HSCI) announced a nice discovery: the aging of the stem cells could be reversed by signals from insulin-like growth factor 1 (IGF-1):


Well, it turns out that the discovery was almost certainly bogus:

Three authors, namely Amy Wagers (boss of the lab), Jennifer Shadrach, and Francis Kim, have found out that the lead first author, postdoc Dr Shane Mayack (see the picture with the Peace T-shirt: I won't comment on his or her gender because many Americans act just way too irrationally whenever such information is released and I just want to avoid a bunch of wild PC animals), did something really, really wrong.

So the three authors have informed Nature and the Harvard Medical School and they have to check another suspicious paper co-written by Dr Mayack - who, of course, insists that everything was fine. Well, people may have been suspicious already when they saw the Peace T-shirt in January 2010. At the workplace, it doesn't really suggest that its carrier is an impartial scientist.

Whether you like it or not, science may lead you to conclude that a war is a better answer than the peace - or any other answer. Even the T-shirt only says "Peace" and not "Youthful Forever", it still shows that too many important answers may have been prepared in advance.

Well, Dr Mayack prepared too many things in advance. For example, both in the 2008 paper and the 2010 paper, she was assumed to make two independent experiments to measure the frequency of blood stem cells in mice, extracted from sca-1 and c-kit markers. Imagine a messy physical system such as mice with some blood junk and guess how precisely you may reproduce various charts. Her results for 2008 and 2010 were: 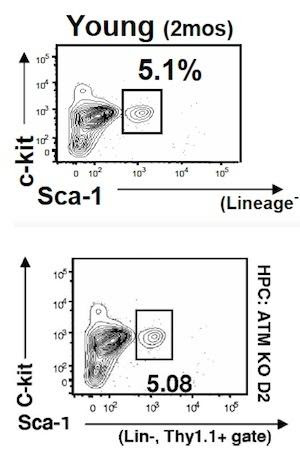 Well, they are almost identical. Ms Wagers, when she learned about these two pictures, simply had to react. I admire her that she did but it would really be crazy not to be stunned by this agreement.

Let me guess that such a remarkable agreement between "spectra" of some abstract properties in two mice doesn't occur in Nature. Dr Shane Mayack just didn't want to bother to do the proper measurements so he or she invented some results that he or she liked and that would look good enough. Chances are about 50-50 that the graph was invented and not measured already in 2008.

Concerning the 2010 claim, I am afraid that to find the "elixir of youth", they simply had to make the measurements again - with the new mice - instead of borrowing some numbers from 2008 because the "amount of aging" may be calibrated differently for different mice. So even if some other graphs were fine, the result is likely to be invalid. I would bet 10:1 that the results can't be right. The answering of the "elixir of youth" question is where it was. And because an "elixir of youth" is unlikely, it's just unlikely that a paper based on flawed evidence is right.

The statements that the "elixir of youth" is still right, it's just not rigorously proven, sound really unlikely to me - a kind of wishful thinking that literally remind me of the era of alchemy.

It's remarkable how similar this problem is to a story that Richard Feynman described in Cargo Cult Science:


... Other kinds of errors are more characteristic of poor science. When I was at Cornell, I often talked to the people in the psychology department. One of the students told me she wanted to do an experiment that went something like this--it had been found by others that under certain circumstances, X, rats did something, A. She was curious as to whether, if she changed the circumstances to Y, they would still do A. So her proposal was to do the experiment under circumstances Y and see if they still did A.

I explained to her that it was necessary first to repeat in her laboratory the experiment of the other person--to do it under condition X to see if she could also get result A, and then change to Y and see if A changed. Then she would know that the real difference was the thing she thought she had under control.

She was very delighted with this new idea, and went to her professor. And his reply was, no, you cannot do that, because the experiment has already been done and you would be wasting time. This was in about 1947 or so, and it seems to have been the general policy then to not try to repeat psychological experiments, but only to change the conditions and see what happens.

Nowadays there's a certain danger of the same thing happening, even in the famous (?) field of physics. ...