How the eye wires up

Nature has some fun articles about the measurements that are unmasking the neural circuitry of the retina:


The NSF article also features an amusing comment that the tiny, multi-electrode retinal readout system was inspired by the particle detectors used to search for the Higgs boson: that's how I found this article in the first place. ;-)

Signals from hundreds of cells are evaluated simultaneously. 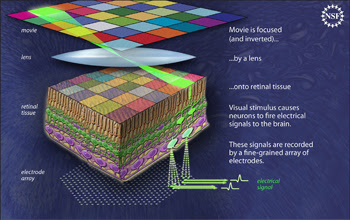 Click to zoom in (by a lot). Credit: Zina Redetsky, NSF


These analyses of the neural network show how they're capable to selectively amplify the color when it's needed, and so forth. The popular articles are not enough for me to understand the details. But it's clear that there's a lot of stuff to study here - and the neural networks are kind of remotely analogous to computers and digital cameras, too.

The World Wide Web was invented at CERN and the particle detectors are becoming useful to study the functioning of the eye which may be useful for many applications in the future. These are clearly not real-world applications of the W-bosons, Z-bosons, or Higgs bosons themselves - and chances are that these particles will never have a real-world application. But they're applications of the technological insights that people naturally and almost inevitably acquire when they're trying to find the most profound truths about the elementary particles. ;-)

It is not a coincidence that such new technologies are pioneered in abstract fields such as particle physics. It's simply because particle physics forces the physicists and engineers to push the technological edge to the realm of the "previously impossible". Those folks have to make advances that would be "uneconomic" - and no one would be thinking about them - if the profitability in some everyday situations were the only issue.

However, what is useful and profitable in the everyday life is changing, too. So we shouldn't be surprised that many things that belonged among the abstract ideas in the past are getting - or will be getting - a part of the "bread and butter" life for much wider sets of professional right now or in the future.

After all, this is true about portions of pure mathematics, too. Lie groups and Calabi-Yau manifolds used to be "just pure, abstract mathematics" at some points of the history, too. And many mathematical structures that are still viewed as "abstract" today will become a part of the "required physics toolkit" in the future - although we can't be quite certain which of them before they actually do.

The ATLAS detector is a part of the LHC collider at CERN - the Center of Europe for the Research of Nuclei. Many nations - mostly European nations - have built it. However, America is more efficient. It can build it, too. 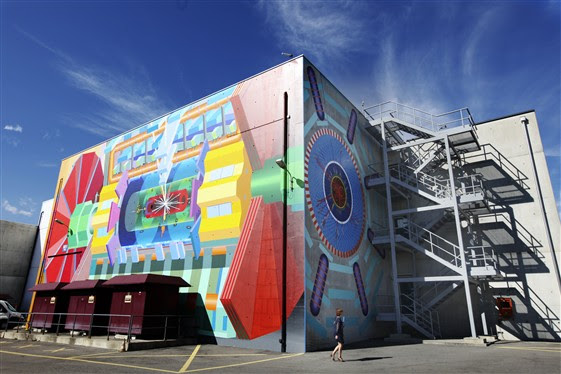 Reuters announced that the work has been completed today.
Luboš Motl v 10:48 AM
Share