In the morning, Josef Váňa who will celebrate his 58th birthday in two weeks said that 7 was a nicer number than 6 so he would prefer to win the race for the 7th time. This mathematical argument sounded sensible.

A few hours ago, he won the Great Pardubice Steeple Chase for the 7th time, indeed. 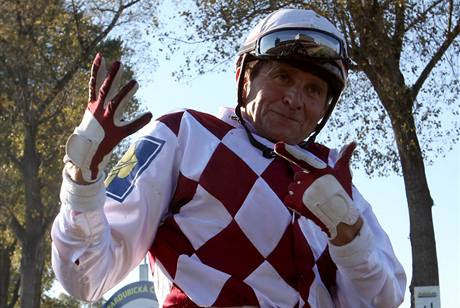 If you want to optimize your chances of winning the most prestigious Czech horse race, statistics strongly suggests that you should be approximately 58 years old, 166 cm tall, 62 kg of weight (the horse has to carry some extra baggage to avoid any advantage from your lower weight!), and you should have already experienced a clinical death as well (Váňa's heart has repeatedly stopped in June 1994 after a complicated collision with another horse in Baden-Baden). :-)


Also, much like Váňa, aside from the death, you should be sure to have collected a sufficient number of milder injuries, including a fracture of pelves, broken all ribs, two fractured vertebras, five fractures of the left clavicle, three fractures of the right clavicle, a fragmented right shoulder, fractures of both wrists, a broken left leg above the huckle-bone, fragmented heel bone, broken jawbone, and five concussions of the brain.

I forgot to tell you that his clinical death in 1994 was supplemented with another serious concussion of the brain, multiple fractures of pelves and ribs, contusion of chest, and a partially torn left lung. Two months after he experienced these mild symptoms of death, he was racing again. As you can see, the training needed for a good horseman is not quite trivial - it's not even easy to memorize what you have to do - but I don't claim you can't do it as well. :-)

You shouldn't expect that Váňa will simply allow you to win because of his compassion. As he has mentioned, if you want to get rid of him, you will have to shoot him.

See the nearly identical text from 2009. A simple argument based on mathematical induction implies that a similar text with the numbers 7,58 replaced by 8,59 may be posted on the second Sunday of October 2011. :-)
Luboš Motl v 7:54 PM
Share