The raw temperature data from New Zealand were showing no temperature change in the 20th century. However, some "official" climatologists have "homogenized" the data in such a way that a significant warming by 1 °C suddenly appeared as a result.

The muddy circumstances that led to this outcome and the impossibility to verify these procedures - all the documents were eaten by a dog or a kiwi - are known as the Kiwigate scandal. In Suite101.com, John O'Sullivan reports on some newest developments:

Their national weather institute, NIWA, announced that it had nothing to do with the homogenized data. The government suddenly claims that there has never been any "official" record.

Mr Jim Salinger, an IPCC lead author who has already been fired from his job for having exceeded his competencies, is likely to have played a crucial role in distorting the climate record. 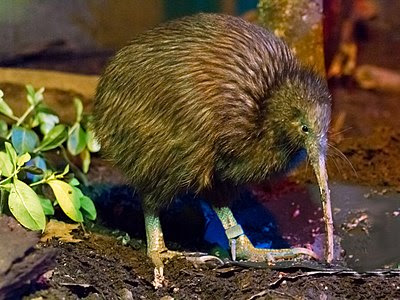 Well, this is the real kiwi...

Incidentally, he has also teamed up with Michael Mann himself and participated in behind-the-scenes operations against the climate realists.