The 32nd session of the IPCC took place in Busan, South Korea, between October 11th and October 14th. While almost everyone previously agreed that Mr Pachauri is dragging the IPCC to the bottom of the sea, there hasn't been a single nation that would officially propose his resignation. Not even the gathering of NSDAP exhibited this stunning degree of groupthink.

The text below are reports from the viewpoint of Dr Radim Tolasz, one of the Czech participants. There were three of them: Dr Radim Tolasz, Dr Ladislav Metelka, and Mr Jaroslav Olša. While Dr Metelka is a climate crusader - diluted to the limited proportions of our "Czech pond" - who often denies that he is a climate crusader, Mr Jaroslav Olša is our ambassador to South Korea while Dr Radim Tolasz is a nice guy who may be described as a coward and opportunist. I will kindly ask him to check that my description of him is accurate. ;-)

But if you read the Czech media, he would often say that e.g Czech President Prof Václav Klaus's contribution to the climate debate is priceless and he agrees with a significant portion of Klaus's opinions, especially about the sociological and economic issues. However, I bet that in Busan, he would behave as Pachauri's poodle. Is that accurate, Dr Tolasz? ;-)

This is a translation of Tolasz's "Briefly from Busan". [Comments in these brackets are mine.] 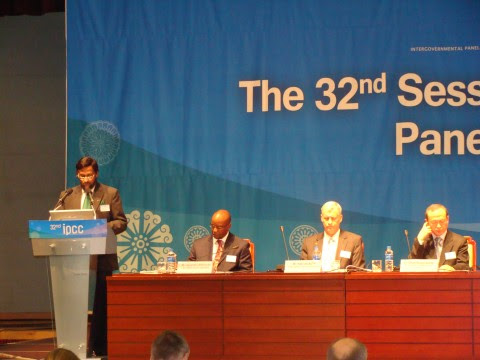 The opening ceremony in Busan

In Busan, South Korea, the 32nd session of the Intergovernmental Panel on Climate Change just began. The Czech Republic is represented by Tolasz, Metelka, and Olša. The opening ceremony was kickstarted by the IPCC boss Rajendra K. Pachauri.

Mr Lee Maanee, the Korean minister of environment, spoke afterwards. The former prime minister and current chairman of Global Green Growth Institute [a stinky NGO founded by the Korean government], Mr Han Seung-Soo, followed, much like the boss of the Korean meteorological institute, Mr Chun Byung-Seong, the mayor of Busan, Mr Hur Nam-sik, a delegate from UNEP, Mr Peter Gilruth, and a guy from WMO, Mr Jerenmiah Lengoasa. The opening ceremony culminated with a recorded video of the UNFCCC boss, Ms Christiana Figueres. 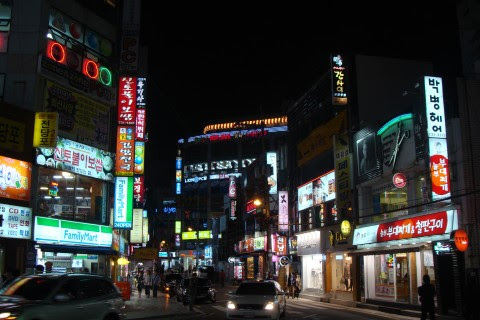 [The opening ceremony was clearly composed of vacuous babbling because Dr Tolasz tells us nothing about the content. However, we may learn that the food was too spicy.]

The first day of big international summits is usually not the most interesting and the most important day (however, it is very rare that someone would only attend the following days). The opening ceremony was briefly described above. The proceedings according to the approved agenda followed (Dr Tolasz adds a file with it). No one bothered to propose any change to the agenda [so everyone has done exactly what Pachauri has ordered them to do]. Also, the transcript of the previous session was approved, with one little complaint. These points at the beginning are usually formalities and this time was no different.

The following item was some discussions about the current budget. This is no longer a formality. It's a nearly unknown fact that the IPCC works from voluntary contributions from individual countries which is unusual for uinternational organizations. However, during the last year, the contributions dropped by 50 percent or so (as of September 30th, it was CHF 6.3 million). Busan in the late afternoon

The discussion that followed, one about the preparation of 5AR (the Fifth Assessment Report of the IPCC) was already marked by the expected discussion about the IAC's recommendations. However, it was interesting to watch that some delegates wanted to make some parts of 5AR shorter, while others wanted them to be longer. In this case, it was especially SYR (Synthesis Report) and SPM (Summary for Policymakers) that was debated. It is a characteristic result that no consensus was reached. So the authors will be responsible for the extent of their writing. The Czech delegation doesn't consider the size of the report to be the most important thing - because the size is determined by the content - who and to whom the IPCC wants/must/can communicate and keep on communicating some information.

In our opinion, the following discussion about the summary of the audit which was worked out by the IAC (the InterAcademy Council) was completely unnecessary. For the second day, a representative from the IAC is scheduled to speak and it would make sense to postpone the discussion to take place after this talk. Moreover, this discussion was filled with "thanks" - a standard part of the first day of similar negotiations when the delegations are thanking the local organizers which inappropriately inflates and extends the discussion.

The negotiations ultimately had to stop at 6 p.m. because at 7 p.m., everyone was scheduled to attend a welcome dinner with the current prime minister of South Korea. And you shouldn't be late for such a toast... 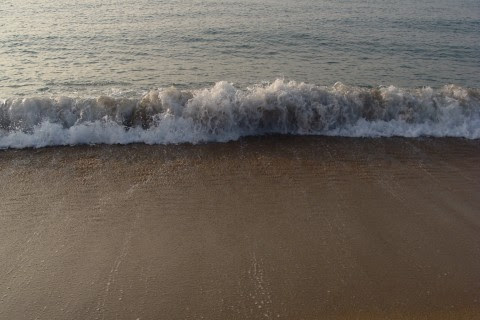 Morning beach before the breakfast

The second day was fully dedicated to the discussion of the conclusions of the IAC "audit". Peter Williams of IAC spoke at the beginning. He clarified and elaborated upon the recommendations - and answered some questions from the audience.

Because many countries endorsed the IAC's proposal (some countries, including Czechia, did so previously via written correspondence; others did so verbally during the plenary session), it was decided to divide the issue into two parts: the IPCC management and the review process. For each part, a working group was established. The group should work out particular proposals so that they can be discussed and approved on this very plenary session. The U.S. seems to be the most active country in this stuff but other countries support it, too.

During the second day of the plenary session, most of the discussion focused on the necessary changes in the IPCC management (establishing of an executive council, IPCC management between plenary sessions, the role of the IPCC secretariat, and so on). The working group has received lots of comments and demands from individual countries and its job won't be easy...

It's pretty obvious that the question of Rajendra Pachauri's survival in his job won't be the main topic of the plenary session. There are two reasons and they're pretty logical. The new chairman, whomever he will be voted by, should already be chosen according to the new rules. But it's not possible at this moment because the new rules are just being constructed and it will be a huge success if they will be approved during this plenary session. A new chairman elected according to the old rules would automatically have a limited credibility - lower than what is needed for a new IPCC boss. The second reason is that the work on 5AR has already started and it is necessary to approve many changes, especially in the review process, as soon as possible for them to be valid and binding already for the preparation of 5AR. 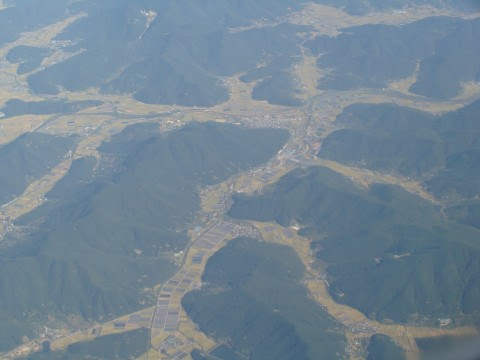 The Korean "Mediterranean" from the Seoul-Busan flight

The organization of the third day was apparently chaotic but the goal was essentially to discuss individual recommendations of the IAC. It's really interesting to watch how the opinions of different delegations differ. It's probably unsurprising that most of the recommendations are just fine for most delegations. However, their full incorporation into the rules of the IPCC's work (and perhaps minor modifications of the current rules) is being prevented by various procedural obstacles which is why it will be needed to proceed carefully.

Almost everyone understands that the skeptical public won't be happy about it - but if the IPCC decides e.g. about the creation of its "executive director" (recommendation p. 45 of the Doc07 file, see the documents on www.ipcc.ch), it must also prepare some professional duties for him (the so-called Terms of References), find the money for his work, define requirements for his professional profile, organize job contest, and so on. All these things have to be known at the moment when the IPCC's structure changes because a plenary decision. Moreover, some delegations (e.g. Czech delegation) don't consider this new chair to be necessary while others would prefer an "executive secretary". Every recommendation faces similar issues.

The arguably least controversial was the recommendation about the conflict of interests. It's worth noting that the IAC hasn't found any glimpses of a conflict in interest during the preparation of AR4 (these are words from IAC's Peter Williams' presentation). [Peter Williams clearly needs a lot of medication: if he wants to show about 10 major conflicts of interests, I can happily provide him with the information.]

On the other hand, a lot of controversy has been about the grey literature. It's not quite right to say that the delegations didn't want to define clear and publicly available rules. In the IPCC's outcomes, it must be clearly distinguished which information was taken from peer-reviewed sources and which wasn't, of course including a defined accessibility of the sources. The grey literature includes even reports created at the government level which is being sent through the legislative process and which is therefore "peer-reviewed" by the individual Parliaments. Such a source may often be more valuable than an article that is published in a journal on a commercial basis. That's why the IPCC wasn't happy about the proposal of the Czech delegation to ban the grey literature altogether. Instead, it prefers a reform of the existing rules how the sources should be used. [That's clearly meant to change nothing whatsoever so that the main points of the IPCC reports will remain complete rubbish taken from radical NGOs and similar sources.] Each reader of the IPCC reports must be given the right to easily check the category of sources from which particular data were taken.

At the end of the third day, it was revealed that 100 countries were participating and 98 of them have a proper "credential". In layman terms, that's a national authorization of a delegation to attend. The Czech delegation was blessed by the Czech minister of foreign affairs; the letter came to the IPCC secretariat in Geneva in advance. The predictions that 190 countries would attend the session were therefore ruled out. 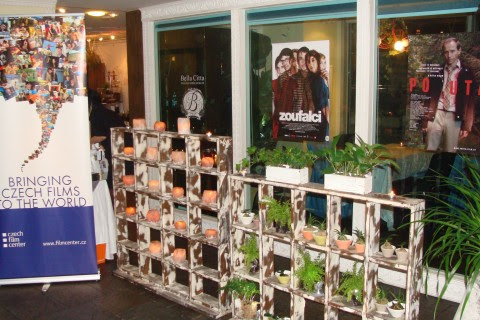 The proceedings at the highest level are slowly coming to their end. The regular session doesn't discuss the climate and its evolution. Instead, we're only talking about the procedures according to which the IPCC works and about the rules that govern the preparation of the IPCC's results. Right now, the biggest focus is on the preparation of 5AR. The most important events were described above.

But before the day concludes, let me say a few words about the fourth day. I won't dare to judge anything. It's too early because the session will end in 2 hours - we just have a lunch break. But I will add a few pictures. [Those pictures were spread all over this article.] 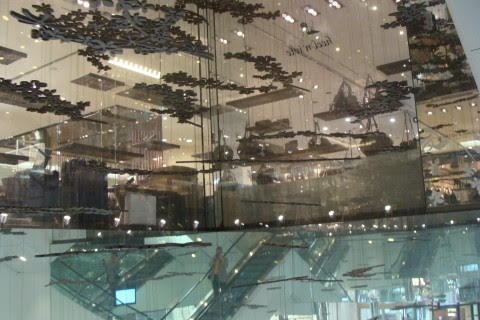 Architecture during a fast lunch in the mall