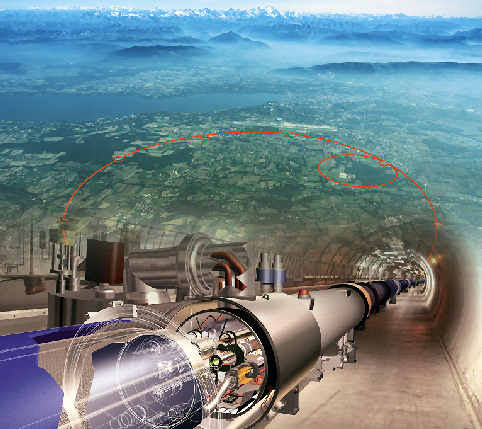 The major detectors CMS and ATLAS at the LHC are approaching 50 inverse picobarns of data each: the threshold could be surpassed today.

By now, each of them has recorded more than 3 trillion events. That's five time more than what we had at the beginning of this month! Indeed, the older version of the article, attached below, celebrated 10 inverse picobarns.

Fifty inverse picobarns is already a high enough integrated luminosity for many relatively sensible models of new physics (mostly SUSY) to show their fingerprint in the data. My estimated probability that 50/pb is enough to see "something new" is 30% but I haven't heard of any hints that this has indeed happened yet.


The collider will keep on colliding pairs of protons for a few more days - before it switches to heavy ions - so the year 2010 won't end too much above 50 inverse picobarns.

However, the current maximal initial luminosity (with 368 bunches) would be more than enough to reach the inverse femtobarn per detector well before the end of 2011 - which is one of the plans. (Most of the 40/pb were collected in the last week or two, not just in the last month.) And the luminosity may be increased more than that - perhaps by a factor of two or three. Clearly, it may be time for the LHC folks to make their 2011 plans slightly more ambitious when it comes to luminosity - or energy. 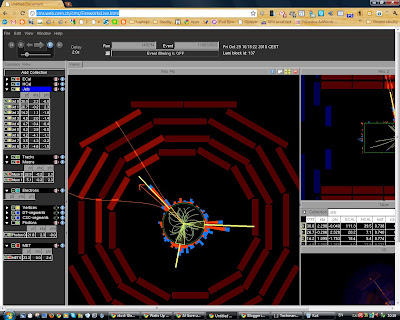 CMS has also started the "Fireworks Live" page (click!) where you can analyze the individual events. I (almost) randomly caught the event #116,633,520 from Run 149,294. (I skipped about 5 screens to get a slightly more exciting event.) If you think it is one of the most important events among the 3 trillion CMS collisions, and if you know what it means, let me know. ;-) However, don't try to look for the God particle on the picture. Here's the warning from the superiors:

Meanwhile, Tevatron's life was extended by 3 years; see HEPAP documents. A light Higgs could be seen and analyzed by the Tevatron before the LHC but in almost everything else, the Tevatron is vastly inferior already today.


Older version of this text:
Originally posted on October 5th, 2010

(Special comment for Tommaso Dorigo: if you don't like the term "recorded luminosity" for whatever rational or irrational reasons, please send your complaints to the ATLAS experiment that uses the term in the middle of their main web page. I am simply adopting the experts' terminology because it sounds sensible to me.)


Konar et al.: How to look for supersymmetry under the lamppost at the LHC


In their particular paper, they assume light - but conceivably light (near the electroweak scale) - superpartner masses. For each ordering of the masses, they are able to find some characteristic processes - typically decay processes with up to 8 leptons in the final state. If Nature were generous enough, these spectacular events would have already been recorded.

To raise your mood, I have chosen the most optimistic paper. Its only citation so far, a paper by Altunkaynak et al., demands 100/pb instead of 10/pb for similar discoveries to be made.

The total number of inelastic collisions within the ATLAS detector has been 726 billion or so: we are approaching one trillion. Similarly for CMS (and LHCb). Also, the maximum instant luminosity has been raised to 69 inverse microbarns per second (69/μb/s). That translates to 2.18 inverse femtobarns per year (2.18/fb/yr).

Recall that this maximum initial luminosity has to reach around 5-6 inverse femtobarns per year to actually collect one inverse femtobarn of data (the goal) during the year 2011 (because of decreasing luminosity during runs, and because of interruptions). The LHC folks are only a factor of 2-3 from the instant luminosity from the 2011 dreams. The numerous, possibly insurmountable orders of magnitude that were discouraging us a few months ago have already been conquered.

I will be recycling and updating this entry - and moving it forward in time - throughout the month of October.
Luboš Motl v 9:30 AM
Share