Just eight years ago, the Czech telephone industry would belong to one state-owned company that would be later known as Czech Telecom. However, the monopoly ended in 2002 and an intense competition took over.

As a result, the Czech consumers were able to get high-quality, cheap services. We could become the #1 nation in text messaging ;-), one of the fastest nations when it comes to the ADSL bandwidth, and there are many results of this kind.

Years ago, there would be people who would say that the free market didn't belong to the communication industry. They were spectacularly wrong - so wrong that no one even bothers to mention that such people have ever existed.


These days, the major communication companies are owned by international corporations - especially O2, Vodafone, and T-Mobile. You can't even distinguish which of them owns the former socialist monopoly (it's the first one, also known as the waterfarts which refers to their logo) and there is a healthy competition in between them.

Another sector that "surely" couldn't be privatized was public transportation - buses and railways. Here the success story is Student Agency, a company owned by Mr Radim Jančura, that owns lots of yellow buses.

For example, for CZK 95 (=USD 5.40), you can get from Pilsen to Prague (or back) in 1 hour. You get a coffee (or another drink), newspapers or a magazine, earphones if you want to listen to music or watch a movie, and connect your laptop/iPhone to a WiFi network in the bus.

It's not excessively cheap but I am still amazed that they can do it for this price.

Student Agency managed to re-teach many people how to use buses instead of trains. It's clear that with the capitalist twist, the buses became much more convenient and economical. These days, the train trip from Prague to Pilsen costs CZK 147 (=USD 8.40) - and the actual expenses are twice as high while the rest of them is paid from subsidies.

Now it seems more likely than ever that the real difference that matters is not one between trains and buses - but rather the difference between effective and small enough private companies and the state-controlled huge inefficient dinosaurs. Why?

Because Mr Jančura has just announced that he is planning to bring all of his consumers from the buses back to the railways and abandon the yellow buses that made him rich altogether. Wow! ;-)

This plan was made possible by the new right-wing government that is not going to block privatization. On the contrary, they're likely to help people like Mr Jančura as much as they can. To be sure, Mr Jančura has also sued the Czech Republic in the European Union for allowing the monopoly - one of the random cases in which the opinion of the European Commission could actually move things in the better direction.

So here is one of his plans: 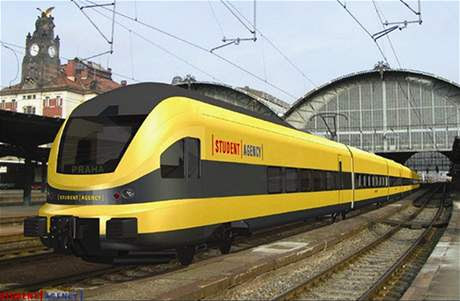 To be sure, the interior of the trains should look nice, too. Here is the second class: 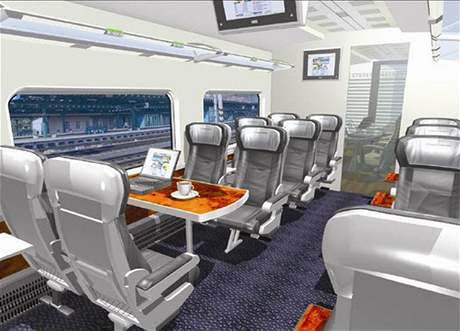 Not bad. But you may also choose to be a first-class passenger. In that case, you may also enjoy things like this conference room: 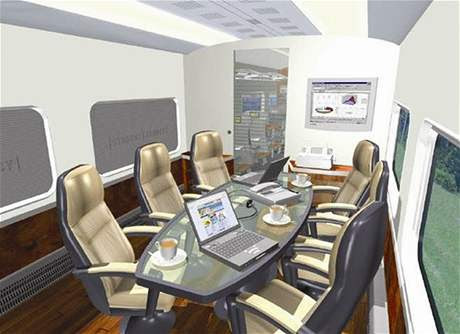 Well, the contrast with the stereotypically dirty and disgusting wagons we remember from socialism couldn't be more striking.

It seems that he is planning to preserve the bus prices. He is surely not an inexperienced dreamer who would easily talk nonsense. He has quite certainly done some calculations. Nevertheless, during his plans to drag the consumers back to the railways, he seems to suggest that the prices will be equal to those in his yellow buses.

How can he possibly get below CZK 100 - to take the Pilsen-Prague route as an example - if the state-controlled company has expenses around CZK 300 sounds plain unbelievable but it's probably true. In this context, the factor of 3 quantifies the difference between (post-)socialism and capitalism.

When I go from Prague to Pilsen (or back) by train (usually at night when the yellow buses no longer operate), it takes about 110 minutes these days (between the two main stations at the city centers, which is a longer path than the Student Agency bus distance that only brings you to the border of Prague). There are very realistic - and almost completely approved - plans to speed this up to 72 minutes or so.

Well, the old tracks are extremely wiggly and slow near Pilsen. In the context of a project partially funded by the EU (just 3 million euros), the tracks should be straightened. That would also require to build a tunnel under the Chlum Hill, less than two miles from the place where I live, which would become the longest tunnel in the country.

Even if you don't speak Czech, you may enjoy an 8-minute video about the planned construction. It's extremely hard for me to believe that and understand how all the long tunnels, new tracks, reconstructed bridges, and so on can be built just for 6 million euros. Have I misunderstood something?

At any rate, the main message I want to convey is that private companies, especially if they're not too big, are able to achieve a vastly higher efficiency than the state-controlled companies and companies that are so big and badly managed that they have effectively become equivalent to the socialist dinosaurs.