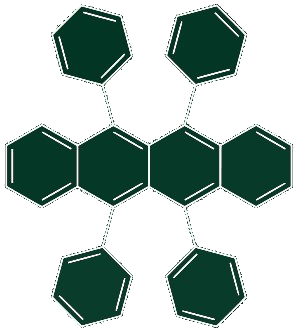 Don't tell it to anyone but carbon will be the element that will find the greatest number of applications in the future rather than a villain.

The chemical content is very prosaic but the arrangement looks cool. As a consequence, this rubrene is a great new material to potentially create "plastic" solar panels. It's organic and carbon is cheaper than silicon because you don't have to deconstruct anyone's microprocessors or artificial breasts to get the stuff.

On the other hand, the molecule depicted on the picture looks like a piece of crystal or an organic compound - so it has much more "inorganic" properties than other organic molecules that have been attempted in solar panels. It follows that the excitons get much deeper to the material than they did for other organic materials and a bigger portion of their energy may be converted to electricity (separation of electrons and holes in a semiconductor that is adjacent to the rubrene element).


Consequently, the efficiency vastly increases from 1% for typical organic compounds. It is actually promising and this realization was made at Rutgers University in New Brunswick, NJ, my graduate alma mater: