Biodiversity: can it replace AGW?

Several climate skeptics, including James Delingpole, Marc Morano, and Doug Hoffman, believe that biodiversity is the next big crisis, the next big lie. As the climate alarmism is getting unsustainable, the alarmists are going to jump on a new bandwagon. Is it true?

Well, I am very skeptical. First, the climate alarmism is not yet over. It seems clear that its power has been substantially diminishing for a year or two and it can receive another serious blow as soon as tomorrow ;-).


But there are still thousands of people who will fight to defend this big lie as vigorously as some Japanese soldiers defended their empire back in 1945. I actually think that many of them are so radical and so obsessed with their "mission" that during the last weeks of the climate alarmism on the Earth, and we're still far from them, those people will be fighting with weapons in their hands and civilized societies will have to shoot hundreds of them in a struggle that will resemble the war on terror.

Movies where they reveal their combative dreams and James Hansen who gets arrested every month are just peaceful reminders what will probably happen. Today, these people are at the top and they still control a big part of the "establishment". Once they're pushed back to the fringe, many true believers will act much more violently.

But even if you think that almost all the AGW crusaders will peacefully surrender, the idea of their jumping on a significantly different bandwagon sounds even less likely to me. It's simply a fact that the ideological infrastructure - and the "quantification of the sins" - doesn't yet exist for the new biodiversity crisis. And it's not trivial to invent and spread a whole new orthodoxy.

Global warming was nice for the vicious haters of industry, growth, freedom, and humanity because the economic growth could have been translated to a specific physical quantity - the CO2 emissions - that were directly translated to the growth of the temperature. Each unit of economic activity was therefore argued to contribute one step to our journey towards the apocalypse. Once the global mean temperature reaches 16.001 °C, their holy scripture says, the world will burn and everyone will die.

None of the steps in the "reasoning" above was true but there was at least a story (or there still "is" a story, if I pretend that the mindless AGW zombies are on par with living humans). In the biodiversity case, there is not even a story. You can't translate the burning of a gallon of gasoline in your car to a number of killed species or a quantity that encodes the reduction of biodiversity. In fact, there is no quantity that safely describes the amount of diversity. And there is also no "simple enough" mechanism that would convert the usual activities into reductions of this non-existent biodiversity quantity.

You can't make tens of thousands of people who have been saying that there is a complete consensus that the climate disruption was real and the most important problem for the Earth, and all this flagrant nonsense, to suddenly say: "Well, there is now a consensus that the problem is completely different." It just doesn't work like that. Individual people may switch from the popular bomb to global cooling and then to global warming - but you can't systematically drag millions of people through such random yet brutal evolution of an ideology.

Empires, and even big schools of mass brainwashing, collapse with the very ideals they were built upon.

Biodiversity: what it is, why it is good

Moreover, biodiversity is a good thing so it's not the same thing as the fight against climate change. If you open the Wikipedia page on biodiversity, you will be reminded of many complex aspects of this concept.

Biodiversity has an aesthetic and cultural value. We like to see many species when we go hiking. It's surely true for most of us but in this case, the amount of biodiversity we actually encounter is tiny relatively to the net biodiversity in Nature. Moreover, our aesthetic feelings are often satisfied with seeing many different colors and a few fundamentally different shapes: you could get pleased just with a few species. The remaining millions may be redundant from the aesthetic viewpoint.

Biodiversity is obviously higher in tropical forests and other hot environments - a reason why it can't be smoothly merged with the global warming hysteria. You simply can't make millions of people believe that if the tundras and the Arctic regions change into a tropical forest, their biodiversity would go down. It's a totally preposterous statement. It is ludicrous not just for professional ecologists but even the schoolkids know that the warm weather is good for life - and especially for biodiversity.

By the way, the high biodiversity of the tropical ecosystems is not the only tension between the AGW bandwagon and the biodiversity movement. An article in Science discusses the recent U.N. biodiversity gathering that wanted to ban climate geo-engineering because it could affect biodiversity.

But back to the high diversity of the warm ecosystems - and the positive impact of CO2 on life.

The only thing that the ideologues can do is to promote exceptions where it is not "manifestly" preposterous to say that warming is bad for life. Obviously, the exceptions are polar bear and coral reefs, among a few others. I doubt that polar bears really love to live in a supercool weather; they can just survive it and use their comparative advantage over other species that have greater problems to stay in cold.

However, it's not "quite self-evidently absurd" to say that the polar bears actually need to live in a supercool environment and spend their lives on sea ice, and everything that is not "self-evidently absurd" is being repeated by the environment movement all the time. Polar bears and a few other species are being taken out of the context - and out of the set of millions of species on Earth - while all "clearly valid" propositions that are inconvenient for their cause have to be brutally censored.

At any rate, it's very hard to define biodiversity. Each organism is a bit different. You're not identical to your parents. But we don't want to count these small variations as "biodiversity". One needs some more significant differences between the organisms for a reasonably defined biodiversity to be high. However, if you use morphological or genetic criteria, you get different results.

Moreover, whatever "size-blind" quantity representing biodiversity you invent, it is likely to be dominated by "small micro-organisms" such as insects. However, we don't care about millions of insect species as much as we care about the many species of mammals or trees. How can you "objectively" justify this preference? And even if you redefine your biodiversity so that it focuses on species that are similar in size - and other things - to us, it's hard to hide that even humans contribute to biodiversity.

Also, the modern civilization is creating lots of other diversity - cultural diversity, diversity of technological products and software - that is not quite biodiversity but it is clearly an analogous quantity that depends on the diversity of some "genetic information of objects" whose high value may "also be good".

While some biodiversity is a positive value for most of us, all the details - which kind of biodiversity is more important for us - depend on subjective attitudes and priorities. It's tough. It's not as simple as a growing CO2 concentration. 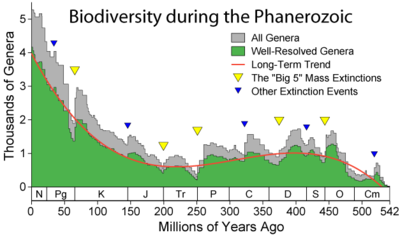 Time goes to the left.

(But "how big" always depends on our arbitrary conventions. Evolution doesn't know any canonical separation to rigid boxes and sub-boxes. All the boundaries may be transgressed and they're being transgressed all the time; that's what evolution is all about.)

However, you see that a new genus typically appeared in 50,000 years or so (1,000 in 50 million years). So such events can take place. However, we're more likely to observe new genera than to witness disappearing genera. However, whenever we find new genera, we don't necessarily have to be aesthetically pleased. Bizarre new life forms - and their mutations - may often look repulsive to us. And some of them don't look too viable. In some cases, it can be the case because they're actually not viable. 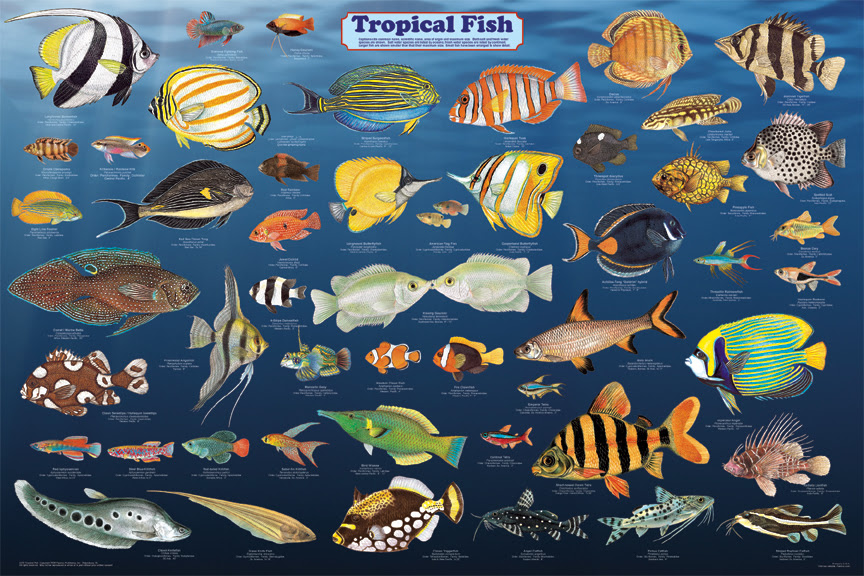 Man-made radioactivity could increase biodiversity by creating new mutations. Some of them could become viable. However, we usually don't like to think that this is also an increase of biodiversity - except that it is.

The Wikipedia article also tells you that 99.9% of species that have ever lived on Earth have gone extinct. Life is constantly evolving. While in the last 250 million years, it usually meant that the biodiversity was increasing, this increase is just a difference between the number of new species and the species that went extinct. Both groups have always been large. Life has always been changing. That's a key statement of evolution.

Biodiversity is a nice thing but it has so many subtle aspects that I can't imagine how this concept could be used to control particular companies in the West - or human thinking. Who would be the denier? It just doesn't seem to work as well as the climate disruption propaganda. Moreover, everyone kind of knows that the most important negative changes of the Earth's aggregate biodiversity are probably perpetrated by the people who live near the tropical forests.

Other hot centers of biodiversity are coral reefs. I don't really believe it's conceivable that their total "amount of life" or "amount of biodiversity" is going to drop to zero in 20 or 40 years, as some people claim. But that doesn't mean we shouldn't try to monitor these things and help these ecosystems if we can. However, we should also understand that our overly active attempts to "help" may actually be harmful because we're neither omniscient not omnipotent - and sometimes we're not even omnipresent. :-)
Luboš Motl v 10:55 PM
Share