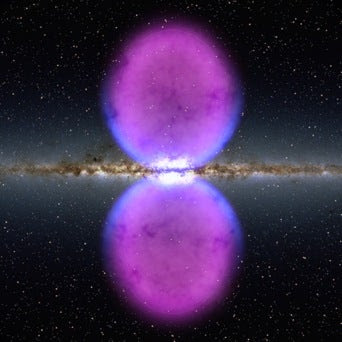 The image shows our Galaxy, the Milky Way, in the middle (horizontal). Above it and below it, there seem to be two huge bubbles filled with X-rays. At least that's what the data from Fermi (formerly known as GLAST) seem to say:


The blue edges that are closer to the galaxy contain X-ray emissions; the purple bulk of the disks are gamma-ray emissions. The diameter of each disk in the "infinity symbol" is about 25,000 light years: see a detailed map including the Solar System about 30,000 light years from the galactic center, away from the bubbles.

At least that's the conclusion that was reached by three top astrophysicists after they analyzed the publicly available data from the Large Area Telescope carried by the Fermi: Douglas Finkbeiner of the Harvard-Smithsonian Center for Astrophysics, Meng Su, and Tracy Slatyer. The latter two were Harvard graduate students.

I was on the admission committee when Tracy (now an IAS postdoc) was moving from New Zealand - and then met her a few times - and I had never had any doubts that she was and is a giant gift to science from the Southern Hemisphere.

The origin of the "infinity symbol" is not clear at this moment. If the light were just escaping away, there would have to be a special event 30,000 years ago, and this event would have to produce two almost exactly disk-shaped objects. I find this scenario rather unlikely.

It's more likely that the X-ray bubbles are linked to an event that occurred millions of years ago and supported by some massive carriers. Star formation, galactic wind, lots of stellar winds combined, accreation of a black hole - none of the models seem to capture the data too well so people talk about "combinations".

I find "combinations" even more unlikely than most of them individually. A "combination" is the word we often substitute for our ignorance. But this effect seems pretty sharp and I guess it will be ultimately understood as a pretty simple one.
Luboš Motl v 8:48 AM
Share