Klaus: reason has replaced fundamentalism in the environment ministry 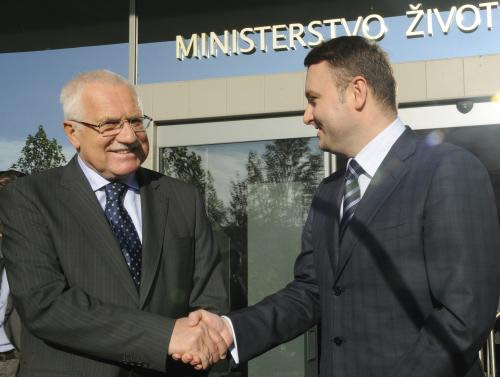 The Czech Press Agency, ČTK, informed about the visit of President Klaus to the environment ministry - the first such visit of our most prominent politician in 14 years:


The Environment Ministry no more fundamentalist under Drobil - Klaus (click)


Klaus have had conflicts with former environment ministers, especially Martin Bursík (2007-2009) of the largely defunct Green Party - which was a typical fundamentalist environmentalist party although it was much less "socialist" than its namesakes.

It's the first time in many years when a standard right-wing politician became the minister of environment after the latest elections that were won by the right-wing parties - although only after they combined their forces.


Under Mr Pavel Drobil's leadership, the Czech Republic will officially refuse to unilaterally impose carbon caps in Mexico (the conference that comes one year after Copenhagen). On the contrary, our country will demand an analysis of the impacts of the fight against climate change on the economy. It will be seen whether our demands will be visible at all.

Klaus has received an atlas - and he presented himself as a friend of atlases - even though minister Mr Drobil said that he wouldn't have wasted the money to create the atlas (as his predecessor did).

Meanwhile, Al Gore's new zero-carbon car is coming to the U.S. market. His own invention, brought to motion by the most natural gases and produced in collaboration with Tata, will compete with Toyota Prius and others. In the U.K., the Goremobile will fight against the Czech mean green Škoda Fabia VRS that used to be produced as a cake but now it's being created by the Devil and his friends:

Mr Gore has measured his own carbon budget and argued that each driver is an extre-hehe-mely powerful source of the most natural gases - several million liters per day.