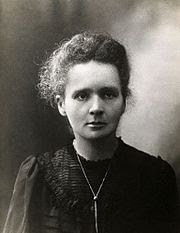 Maria Skłodowska was born on November 7th, 1867 - exactly 50 years before Lenin's Coup in Russia - in Warsaw, Russian Empire. Yes, the history of Poland was sometimes sad so the "Vistula Land", which is how the "Congress Poland" was known at the time, was a province of Russia.

Her parents (and grandfather) were well-known teachers and she had 4 older siblings. While her father was an atheist, her mother was a devout Catholic. Nevertheless, Maria's oldest sister died - and so did the mother - which led Maria to become agnostic. She spent some time in a boarding school and in countryside. Her family's assets were stolen by the Russian feudal bastards because the family cared about the Polish independence.


Maria made a contract with her sister Bronisława that they would help each other financially. That eventually directed Maria's world line to Paris - after the first attempt that failed. She was probably in a mutual love with mathematician Kazimierz Żorawski whom she planned to marry but the plans didn't work.

She eventually went to the Sorbonne and earned a maths degree at the age of 27. An instructor at ESPCI - a different institution - was attracted to magnetism, much like she was, and a part of this magnetic attraction was transformed into a mutual magnetic attraction between Maria and the instructor. His name was Pierre Curie. ;-)

One year later, in 1895, after she was denied a job in Kraków (in her beloved Poland) because of her lack of a penis, she returned to Paris and married Pierre Curie. (In France, she only faced xenophobia and false "accusations" that she was Jewish. Despite popular misconceptions, there hasn't been any significant discrimination against women in science in Western Europe for more than 100 years.) The two happily spent the rest of their lives in the laboratory. :-) One more year later, Henri Becquerel discovered radioactivity of uranium - although he didn't quite know it was radioactivity - and radioactivity entered Maria's life.

Her clever methods showed that the effect had nothing to do with chemistry - only the amount of uranium mattered. Also, the air around became conductive. She began to study radioactivity systematically - finding new elements that exhibited the phenomenon, and so on. The list included thorium and polonium whom they gave the name to celebrate her Polish homeland.

She shared the 1903 physics Nobel prize with Curie and Becquerel for "research on Becquerel's radiation". Her second, 1911 chemistry Nobel prize wasn't shared with anyone because Pierre Curie's skull was fatally fractured by a horse on the street on a rainy, slippery day 5 years earlier. She got the second prize for the "discovery of radium and polonium" and became the first winner of two Nobel prizes. Even today, she remains the only recipient of two different science Nobel prizes.

Radium was discovered by the pair in 1898 in samples of pitchblende (or uraninite) that she ordered to be sent from North Bohemia. If you don't know, Bohemia is another word for the Czech Kingdom, a part of Austria-Hungary. The sample was probably the only major initial contribution of my homeland to the science of radioactivity. By the way, the uranium mining in Northwestern Czechia (near the borders of "DDR") pretty much belongs to the history books these days. But in the 1950s, the mines were alive and kicking and many enemies of socialism were forced to work over there as prisoners.

In 1932, she also founded an institute of oncology - where cancer was treated by radioactivity - in Warsaw. If you remember Maria's contract with her sister Bronisława and if I tell you that Bronisława was a physician, you shouldn't be shocked that Bronisława became the director. ;-)

Also, given Maria's immense, pioneering, self-sacrificing, and sometimes careless life-long activity in the field of radioactivity, you shouldn't be shocked that she died of cancer - leukemia, in fact - on the U.S. Independence Day in 1934 (a better day than the Great October Revolution date of her birth), aged almost 67 which is not too bad.

She may be remembered not just as one of the most important female scientists in the history but also as one of the true experimental fathers ;-) of the 20th century revolution in physics that has showed that despite the self-confidence of the 19th century physicists, lots of important phenomena had been unknown and waited to be discovered.
Luboš Motl v 9:15 AM
Share