Isaac Newton had to verify that his theory of gravity predicted the right elliptical orbits. How did he know they were ellipses? Well, Johannes Kepler determined his laws out of the very accurate data obtained by Tycho Brahe. Both Kepler and Brahe worked in Prague. 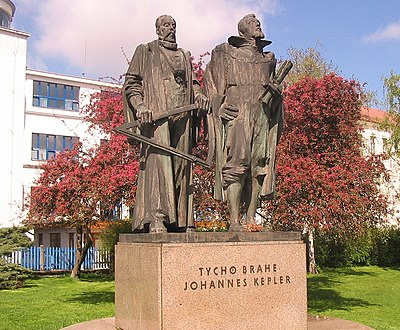 A statue of Kepler and Brahe in front of the Kepler High School, near the Prague Castle. Only in Summer 2010, I visited it for the first time.

Tycho Brahe was a Danish nobleman - who has been incorrectly called Tycho de Brahe for centuries - and his death in October 1601 (aged 54+) remains a kind of mystery.

The classic legend says that he was so repelled by the idea of breaking the royal etiquette that he bravely but simply refused to go to the toilet during a long and fancy dinner (where Brahe got drunk a bit) hosted at the Rožmberk Palace of the Prague Castle (that has belonged to Rudolph II for a year, since 1600) by Petr Vok of Rožmberk on October 13th (where Brahe went in a great mood; the guests can only leave the table after the host): his bladder just exploded.

Maybe it didn't but when Brahe returned home, he could no longer use it. More modest sources only speak about a related bladder infection as opposed to an explosion. Others talk about kidney stones which are, according to modern medicine, needed for a bladder to explode (instead of empty itself).

The dinner came just a few days after Brahe's personal meeting with our Emperor Rudolph II who had just hired him to produce new accurate astronomical tables. After escalating pains, he died on October 24th amid tears and prayers by his family. His last words were "Let it be apparent that I didn't live my life in vain." At least Kepler has claimed so. ;-)


However, there are good reasons to think he was poisoned - either by an act of murder or by his own negligence (namely improper experiments with elixirs). In 1901, when his remains were lifted for the last time so far, the researchers found lots of mercury. The Austrian-Hungarian authorities were afraid that the body had been stolen which is why they opened the tomb. Brahe's body was there - but without the metallic nose and without any kidney stones.

In the 1990s, lots of lead were found in Brahe's beard which is probably not unusual given the importance of the element 400 years ago. Also, his dead body may have spent some time in a lead coffin.

The newest hypotheses about the possible murderer are pretty amazing. Brahe had to leave Denmark when Christian IV, a royal bastard, took over at the age of 19 or so. That was different than during the reign of Christian's father, Friedrich II, who employed Brahe as his astrologer and who paid over 5% of the Danish GNP for Brahe's research. ;-)

I called the famous king of Denmark, Christian IV, a bastard not only because he reduced the funding for science but also because he could have actually been Brahe's biological son, as some theories claim! Brahe would create him with Christian's mother Sofie of Mecklenburg-Schwerin at the age of 32 (she was 19+ when Christian was born in 1577).

Some top Danish researchers claim that the young king's mother had an affair with Brahe so either Christian IV or his brother Hans ordered the murder of Brahe; the physical killer would probably be Erik Brahe, Brahe's distant cousin who was a Swedish diplomat (his meeting with Hans in Poland is described in Erik's own diary). In fact, they also say that these stories inspired Shakespeare to write Hamlet which is, you know, a pretty big deal in literature. Recall that Prince Hamlet of Denmark murdered his uncle Claudius.

Of course, when I mention the name Erik, it's also plausible that the murder was realized by some people who have gotten lots of money from the stupid people purely for denying the existence of gravity (2 million euros) which was going to be established because of Brahe's fine work. ;-)

It's 2010 and the right time for another test. Danish toxicologists and other international experts gathered in Prague to do so. 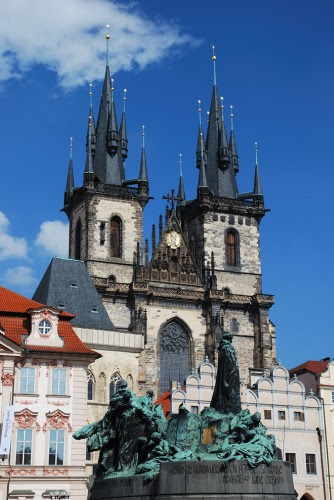 The Czech Press Agency, The Associated Press, and others inform about the event that started today in the morning.

Imagine that you're in Prague, the Czech capital, and you go to the Old Town Square. Instead of looking at the Prague Astronomical Clock (Orloj) on the City Hall that celebrated 600 years just a month ago, you choose the Church of Our Lady (see picture above) that has been called the Týn Church (Týnský Chrám) for many years by the Czech atheists. ;-)

The previous Czech name is literally The Church of Godly Mother in front of Týn (Kostel Matky Boží před Týnem) - Týn Yard is a historical object currently with 18 houses between the Church of Our Lady and Church of Greater St James.

That's where Brahe's remains remained for a long time. It was not clear in what shape the remains would be found today. See the video here or the English one by the BBC to get a glimpse of the atmosphere.

Bladder problems, kidney stones, poisoning by elixirs or murderers remain possibilities. However, there actually exist other possible explanations of the source of trouble. Let me offer you my own.

When Brahe was a student, he fenced against another Nobleman who cut a piece of Brahe's nose. It's a historical fact that the biological material was replaced by a metallic component. The metallic nose wasn't found in 1901 but he has used it for quite some time. 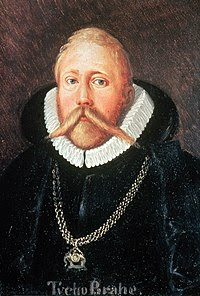 Now, my hypothesis is that the artificial nose was made out of a rather low-quality unstable amalgam with lots of mercucy. (Update: some sources say that the nose was made of gold or a gold-silver alloy.) And in 1601, the material leaked a lot of the heavy liquid metal which would kill Brahe. Dr Vellev has another hypothesis about the source of mercury - a pain reliever that Brahe would take before he died.

I am not sure whether the folks will be able to settle the question, however. The tests will include a CT-scan and an X-ray technique known as PIXE analysis in the Nuclear Research Institute of the Academy of Sciences in Řež, 20 miles from Prague. PIXE analysis was already made in 1996 with some of his hair that were stored in Denmark: they not only found mercury but concluded that it got into his body just a day before his death (i.e. long after the dinner).

At 4:20 pm, it was clear what they roughly found in the grave. They saw two caskets. One belongs to Brahe, another belongs to his wife, a commoner from Kågeröd in Skåne named Kirstin Jörgensdatter who gave Tycho 3 sons and 5 daughters (they never married in a church). His wife's casket is made out of wood and it is in the state of decay. However, there are also astronomers' remains collected in this tightly packed, well-preserved tin coffin. 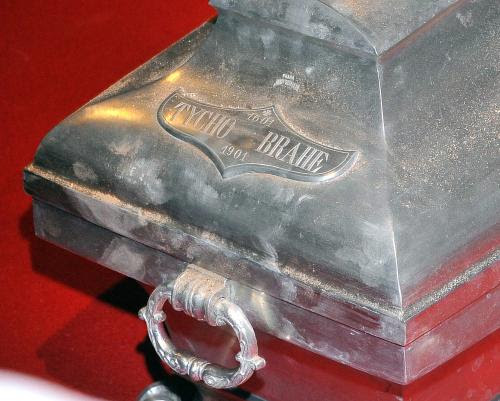 The Danish folks are not interested in the wife so they plan to leave her in her grave. A piece of a wooden broom was found in the grave, too. A janitor may have left it over there during cleaning exercises in 1901 or earlier.

A sophisticated drilling procedure has to be designed to pick the tin box without damaging the environment too much - because they're also interested about the way how tin coffins used to be put in the grave etc. They're also dreaming about renaissance clothes.

About 100 journalists are present. The research should be speedy because by Friday, all the things should return to the grave. A mass will be held.

Johannes Kepler himself wrote lots of stuff about Brahe's life in Prague and the funeral was no exception. Kepler wrote:


The coffin was carried by twelve imperial officials, mostly noblemen. In long mourning clothes, Tycho's younger son was marching right behind the coffin, in between Erik Brahe [possible murderer] and baron Ernfried von Mincwitz. They were followed by additional imperial aides, barons, and noblemen. Tycho's assistants and servants, Tycho's spouse accompanied by two revered royal judges, and finally his three daughters in separate rows, each of whom was surrounded by two aristocrats. The chairs in the church, on which his family members were sitting, were covered in black English drapery. The streets were so full of people that all those who were walking in the procession were seemingly confined by two walls. And the church was so overcrowded both by the aristocracy as well as low-born people that it was nearly impossible to find a spot for yourself.

This detective flash (in Czech, sorry) may be a little bit too inclusive. Candidate killers include the church as well as Johannes Kepler himself - who may have wanted some unlimited access to Brahe's data. If you walk around, you will also learn about Brahe's life.
Luboš Motl v 9:16 AM
Share