SciAm writers who suck: our polls and readers suck 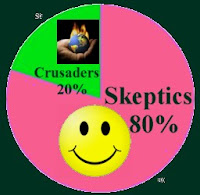 In the sidebar of their article, there was also a poll that Scientific American later erased because they didn't like its results.

Only approximately 1/4 of the respondents expressed their belief in the dangerous man-made climate change orthodoxy.

In that text, Yam says that their own poll was worthless (so why did they do it?), its results mean nothing, and even if they did, it's irrelevant because only 10% of the SciAm readers are scientists. According to SciAm editors, SciAm readers are almost entirely idiots whose reasoning and opinions should be neglected relatively to the "enlightened" inkspillers among the editors themselves.

What do these idiots really think about themselves and why?


The first point by Yam is mostly correct. The poll was nearly worthless, indeed. The questions and possible answers were badly chosen and the respondents were allowed to check several answers - even those that were nearly mutually exclusive - so the numbers never added up to 100%. ;-) The SciAm staff simply can't do better.

The last point is misleading: there are surely lots of scientists among the people who remained SciAm readers (at least of its online edition), despite the catastrophic decrease of the quality of the magazine. In the comment thread under Yam's article, you may be assured that there are SciAm readers who are both skeptics and scientists.

However, it's interesting to think about the second point Yam made - namely that polls are worthless in general.

Well, I disagree with him that the results imply that the reality has to be different. After all, he mentions that only 1/2 of the visitors of the poll page came from major skeptical blogs - especially What's Up With That and Small Dead Animals. So even this "skeptical subsidy" isn't quite enough to explain why the skeptical voices got 80% of the votes. (By the way, why doesn't he offer us statistics about the composition of the actual respondents and not just all the visitors?) The skepticism among the people who know something about the science is clearly vastly greater than what the SciAm bigots are willing to admit.

But more importantly, I do agree that polls are worthless from the scientific perspective. Too bad that they can't consistently realize this point whenever they look at polls whose results they like. For example, why don't they appreciate that it's irrelevant that "97%" of the grant parasites, cowards, and left-wing activists pretending to be scientists in various institutions with scientific names subscribe to the AGW crap?

Clearly, the message of the Scientific American is that the government bureaucrats have to be more influential than people who are actually interested in science and who read journals - and blogs - about science, right? Your whole ideology is supported by polls only - that's what you mean by the "consensus". There are no actual articles that would contain convincing evidence for any of your big claims which is why you have to rely on polls and informal proclamations. But you very carefully cherry-pick the polls, too.

Your attitudes and deeds are disgraceful, Mr Yam.
Luboš Motl v 10:27 AM
Share